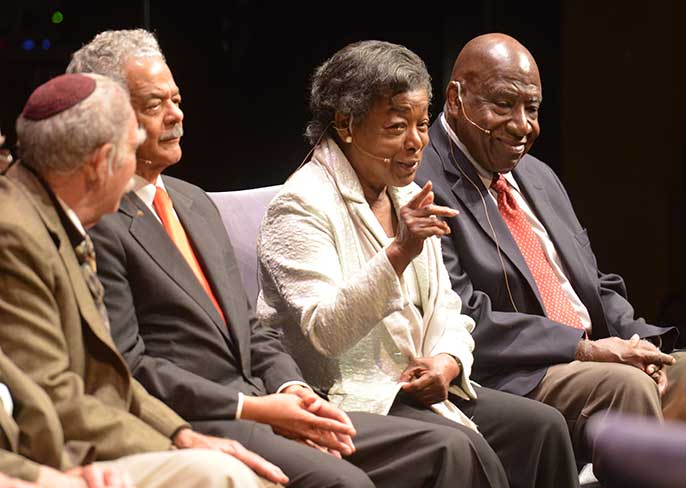 UCLA alumna Helen Singleton reminisces about her time as a Freedom Rider. With her on a panel at Royce Hall are fellow riders Rabbi Philip Posner, Robert Farrell and her husband Robert Singleton.

More than 800 people gathered in Royce Hall on Feb. 6 to applaud the courage of 16 civil rights activists — all UCLA alumni — who, as Freedom Riders, challenged segregation through nonviolent resistance in the South in 1961 and faced intimidation, beatings, arrests, firebombing and other forms of violence.

Taking part in the ceremony were six living UCLA Freedom Riders and family members representing two who had died since the historic movement when hundreds of students, both blacks and whites, from every region of the country boarded buses and trains to defy Southern codes that mandated racial separatism.

In a lively panel discussion, the six UCLA Freedom Riders relived their experiences and described how they trained in nonviolent resistance. Among those telling their stories were Freedom Riders Robert Singleton, the first director of UCLA's Bunche Center for African American Studies; his wife Helen; and former Los Angeles City Councilman Robert Farrell. The panel was moderated by law professor Cheryl Harris, the Rosalinde and Arthur Gilbert Foundation Chair in Civil Rights and Civil Liberties. She also is chair of the Department of African-American Studies at UCLA. UCLA Chancellor Gene Block and Darnell Hunt, a sociology professor and director of the Bunche Center for African American Studies, participated in the event.

During the ceremony, the Freedom Riders were presented with resolutions from the Los Angeles City Council by Council President Herb Wesson and from the California State Assembly by Assemblymember Reginald Byron Jones-Sawyer, chair of the Legislative Black Caucus. His uncle was one of the Little Rock Nine, high school students who braved violent mobs to integrate Little Rock Central High School in 1957.

The panelists also encouraged young activists to continue the movement towards equal rights and treatment under the law. The UCLA Gospel Choir sang "We Shall Overcome" and "The Black National Anthem;" a spoken-word performance was given by undergraduate Kamil Fields.

A moment of silence was also observed in honor of the six UCLA Freedom Riders who have died.