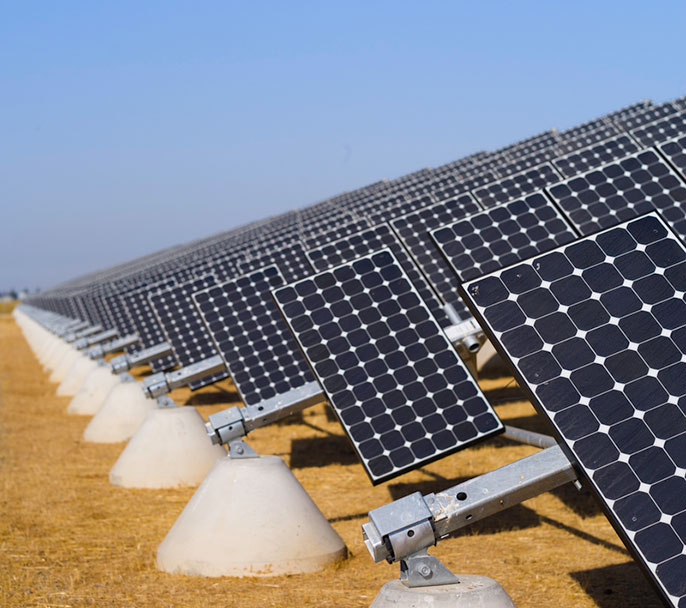 Solar energy is one of the ways UC is striving to become carbon neutral — the goal of the university's Carbon Neutrality Initiative. David Auston, who leads the Institute for Energy Efficiency at UC Santa Barbara, was named UC Sustainability Champion for his efforts on behalf of the initiative.

A UC Santa Barbara energy expert has been named the University of California Sustainability Champion for 2015, an honor that acknowledges his tireless efforts on behalf of the systemwide Carbon Neutrality Initiative.

David Auston has the been initiative's "MVP," said UC Chief Operating Officer Rachael Nava, as she presented the award to Auston, who leads UC Santa Barbara's Institute for Energy Efficiency.

Auston has fostered new kinds of collaborations between researchers and facilities managers, helping build connections that will be essential for UC to reach the initiative's ambitious goal of emitting zero-net greenhouse gases from operations by 2025.

“He has successfully built those bridges and, in so doing, put the Carbon Neutrality Initiative on the path to success,” Nava said Tuesday (July 21) during an awards ceremony at the California Higher Education Sustainability Conference hosted by San Francisco State University.

“I’m very honored and was certainly not expecting it,” Auston said of being named UC Sustainability Champion.

Auston and Brown also co-chaired a workshop in October at UC Santa Barbara that brought together researchers and sustainability officers from UC campuses, the Division of Agriculture and Natural Resources, and the UC-affiliated national laboratories at Berkeley, Livermore and Los Alamos. Their discussions formed the basis for recommendations on applied research priorities for the Carbon Neutrality Initiative.

Auston also was the co-organizer of a first-of-its-kind meeting between power providers, water utilities, regulators and researchers from across the western United States who looked at how to better manage and regulate electricity and water in ways that conserve both resources.

Other collaborations are in the works, including a conference in the fall that is expected to draw scientists and climate experts from UC and around the world. The summit is an outgrowth of the research workshop held last fall at UC Santa Barbara and will showcase climate solutions developed by UC that will help the state, nation and world aggressively reduce greenhouse gas emissions.

The Carbon Neutrality Initiative, launched by Napolitano in 2013, has been an impetus for collaboration throughout the UC system, Auston said.

“It’s been a wonderful vehicle that has helped us to work together as a single university,” Auston said. “There are a great many talented faculty, staff and students in the 10 campuses and three affiliated national laboratories. We can accomplish many wonderful things if we can harness the full potential of the UC system.”

Napolitano has called carbon neutrality “a monumental objective” for UC. If it meets its 2025 target, UC would be the first major research university to accomplish it. Auston is confident it can be done.

“I’m very optimistic that we will achieve the goal, as ambitious as it is,” he said. “We’re learning a lot along the way, and there is great educational value for students. They’re a key part of it. It’s their future.”

An electrical engineer and physicist, Auston’s career has spanned academia and industry.

Auston was president of the Kavli Foundation, a philanthropic science organization, prior to joining the Energy Efficiency Institute in 2009. He was president of Case Western University in Cleveland, served as provost of Rice University in Houston, and was a professor and dean at Columbia University. He began his career as a researcher at what was then Bell Laboratories in 1969.