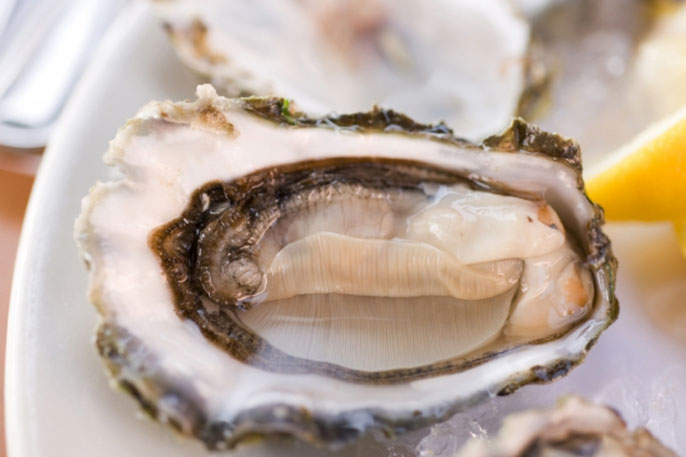 Ten estuaries on the West Coast of North America have been identified as priority locations for expanding the use of conservation aquaculture in a study led by the Native Olympia Oyster Collaborative and funded by the Science for Nature and People Partnership (SNAPP). SNAPP is a research collaboration supported by the National Center for Ecological Analysis & Synthesis (NCEAS) at UC Santa Barbara.

The study, published in Plos One, recommends locations and methods for the strategic expansion of conservation aquaculture to bring back Olympia oyster populations — both to local estuaries where they have most declined, and into more local restaurants for oyster lovers to dine on. The authors propose using aquaculture in these estuaries — seven of which are in California — in a win-win scenario that supports severely declined Olympia oyster populations, while also benefiting people, including local shellfish growers and Tribal communities.

“If you’ve eaten oysters on the half shell anywhere on the West Coast of North America, chances are good that you’ve been eating one of a few species introduced to the region for just that purpose,” said April Ridlon, SNAPP postdoctoral scholar, collaborative lead of the Native Olympia Oyster Collaborative (NOOC) and lead author of the study. That’s partly because the oyster native to this coast, the Olympia oyster (Ostrea lurida), was overfished in the Gold Rush era, and some populations — faced with other stressors like habitat changes and sedimentation — never recovered.

Humans have used aquaculture — growing aquatic animals and plants to produce food — for millennia.“ The oysters served at your local oyster bar have likely been grown first in a hatchery in tanks, then put out into a bay or estuary until they reach an appropriate size to be harvested and make it onto your plate,” Ridlon said. “This same process can also be used to restore declining wild populations, similar to captive breeding programs for endangered species like California Condors and Hawaiian Monk Seals. Native oysters that are raised in a hatchery can be added to local estuaries permanently to help boost their numbers where populations have severely declined. Using aquaculture techniques to support wild populations of native species is what we call conservation aquaculture.”

Restoration of Olympia oyster populations doesn't always require the use of aquaculture; many projects have been implemented across the species’ range from British Columbia to Baja California, without using aquaculture at all (see the NOOC Restoration Site Map). Aquaculture techniques can also pose risks, including unintended negative ecological and genetic outcomes resulting from releasing hatchery-raised oysters into wild populations, many of which aren’t well understood.

This new study thoroughly evaluates the risks and rewards, and recommends aquaculture only at ten priority estuaries where using it is critical to restore oyster populations, and where the benefits clearly outweigh the risks. Two priority estuaries are in the Puget Sound region of Washington: Northern Puget Sound and Whidbey Basin; one is in Oregon: Netarts Bay. The remaining seven are in California: Humboldt Bay, Tomales Bay, Richardson Bay, Elkhorn Slough, Morro Bay, Carpinteria Marsh, and Mugu Lagoon. Aquaculture can be used to support conservation efforts at all of these sites, without growing native oysters to harvest or sell them.

At some of the priority estuaries with good water quality and a nearby hatchery, commercial aquaculture and harvest also are possible, making this tool a unique way to support both oysters and people. In these estuaries, oyster offspring produced by commercial aquaculture may be swept into the bay and settle in local wild populations, increasing their numbers. Growers may also benefit from adding a new oyster species to those that they grow — one that is more resilient to the diseases or climate-related events that can wipe out other oyster species entirely.

In Puget Sound, where the Olympia oyster once supported the shellfish industry, many farmers are already growing the native oyster, supported by a niche market of “foodies” looking for a different flavor and the “tide-to-table” experience. “Olys — the industry nickname for Olympia oysters — have a unique flavor profile. They’re smaller than most other oysters and pack a punch of flavor,” said Shina Wysocki, owner of Chelsea Farms Oyster Bar in Olympia, Wash. “They also provide an authentic connection to the traditional foodways of the West Coast.” Puget Sound Restoration Fund (PSRF) has thoughtfully engaged with commercial growers to explore conservation aquaculture of Olympia oysters in the region, and hopes to continue this approach at the two priority estuaries identified by the study: Northern Puget Sound and Whidbey basin.

“This model of partnership between growers and restoration organizations could be used in other priority estuaries to expand the toolkit for bringing native oysters back to mudflats and menus in the future,” said Betsy Peabody, executive director of PSRF.

And the Olympia oyster isn’t the only marine species that can benefit from using aquaculture as a tool to restore its populations. “There is a growing interest in using conservation aquaculture for marine species globally — to support native populations of everything from kelp to abalone to giant clams,” said Tiffany Waters, co-author and global aquaculture manager for The Nature Conservancy. “This kind of collaborative research is so exciting, as it can be used as a model for other species and to provide win-win opportunities for both nature and people.”