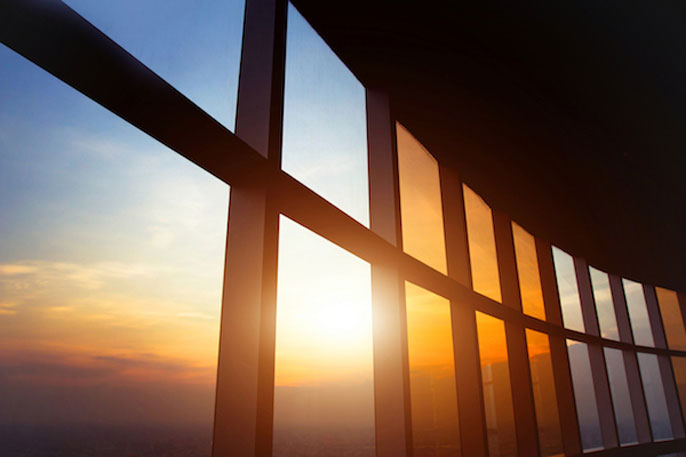 Smart windows that are transparent when it’s dark or cool but automatically darken when the sun is too bright are increasingly popular energy-saving devices. But imagine that when the window is darkened, it simultaneously produces electricity.

Such a material — a photovoltaic glass that is also reversibly thermochromic — is a green technology researchers have long worked toward, and now, scientists at Lawrence Berkeley National Laboratory (Berkeley Lab) have demonstrated a way to make it work.

Researchers at Berkeley Lab, a Department of Energy (DOE) national lab, discovered that a form of perovskite, one of the hottest materials in solar research currently due to its high conversion efficiency, works surprisingly well as a stable and photoactive semiconductor material that can be reversibly switched between a transparent state and a non-transparent state, without degrading its electronic properties.

The research, led by Peidong Yang of Berkeley Lab’s Materials Sciences Division, was published this week in the journal Nature Materials in a study titled, “Thermochromic halide perovskite solar cells.” The lead authors were Jia Lin, Minliang Lai, and Letian Dou, all in Yang’s research group.

The scientists made the discovery while investigating the phase transition of the material, an inorganic perovskite. “This class of inorganic halide perovskite has amazing phase transition chemistry,” said Yang, who is also a professor in UC Berkeley’s departments of Chemistry, and Materials Science and Engineering. “It can essentially change from one crystal structure to another when we slightly change the temperature or introduce a little water vapor.”

When the material changes its crystal structure, it changes from transparent to non-transparent. “These two states have the exact same composition but very different crystal structures,” he said. “That was very interesting to us. So you can easily manipulate it in such a way that is not readily available in existing conventional semiconductors.”

Halide perovskite materials are compounds that have the crystal structure of the mineral perovskite. Its unique properties, high efficiency rates, and ease of processing have made it one of the most promising developments in solar technology in recent years.

Researchers at another DOE lab, the National Renewable Energy Laboratory (NREL), recently made a related discovery, using a chemical reaction in a hybrid perovskite to demonstrate a switchable solar window.

The Berkeley Lab researchers did not originally set out to develop a thermochromic solar window. They were investigating phase transitions in perovskite solar cells and trying to improve the stability in the prototypical organic-inorganic hybrid perovskite methylammonium lead iodide. So they tried using cesium to replace the methylammonium.

“The chemical stability improved dramatically, but unfortunately the phase was not stable,” said Dou, who was a postdoctoral research fellow and is now an assistant professor at Purdue University. “It transformed into the low-T [temperature] phase. It was a drawback, but then we turned it into something that’s unique and useful.”

The material is triggered to transition from the low-T to high-T phase (or from transparent to non-transparent) by applying heat. In the lab, the temperature required was about 100 degrees Celsius. Yang said they are working to bring it down to 60 C.

Lin, a Berkeley Lab postdoctoral fellow, said moisture, or humidity, was used in the lab to trigger the reverse transition. “The amount of moisture needed depends on the composition and the transition time desired,” he said. “For example, more bromide makes the material more stable, so the same humidity would require longer time to transform from the high-T to low-T state.”

The researchers will also continue to work on developing alternative ways to trigger the reverse transition, such as by applying voltage, or engineering the source of the moisture.

“The solar cell shows fully reversible performance and excellent device stability over repeated phase transition cycles without any color fade or performance degradation,” said Lai, a graduate student in Yang’s group. “With a device like this, a building or car can harvest solar energy through the smart photovoltaic window.”

The research was supported by DOE’s Office of Science. Other co-authors of the paper are from UC Berkeley, Stockholm University, and Lawrence Livermore National Laboratory. The Stanford Synchrotron Radiation Lightsource at SLAC National Accelerator Laboratory and the Advanced Light Source at Berkeley Lab, both DOE Office of Science User Facilities, were used to collect some of the data.