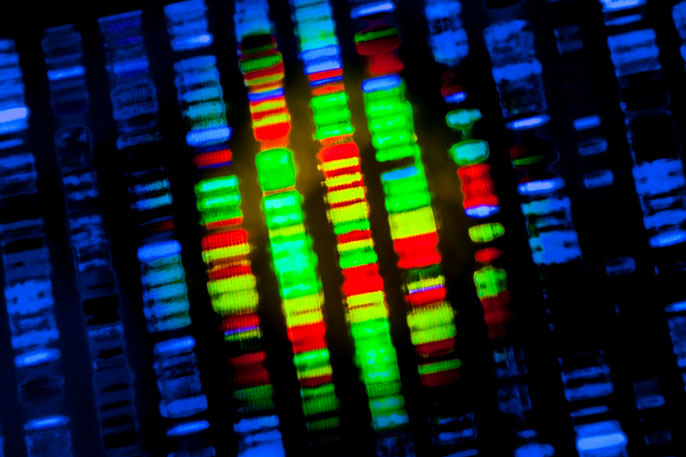 UCLA scientists have made a major advance in understanding the biology of schizophrenia.

Using a recently developed technology for analyzing DNA, the scientists found dozens of genes and two major biological pathways that are likely involved in the development of the disorder but had not been uncovered in previous genetic studies of schizophrenia. The work provides important new information about how schizophrenia originates and points the way to more detailed studies — and possibly better treatments in the future.

Schizophrenia is a chronic, disabling mental illness whose symptoms can include hallucinations, delusions and cognitive problems. The illness afflicts about 1 percent of the human population — more than 50 million people worldwide. Because the causes of schizophrenia are poorly understood, current medications can help diminish the symptoms but do not cure the disorder.

The study, which is published online in the journal Nature, is likely to have an impact beyond schizophrenia research because it demonstrates a general and potentially powerful new strategy for illuminating the mechanisms of human disease.

“This work provides a road map for understanding how common genetic variation associated with a complex disease affects specific genes and pathways,” said principal investigator Dr. Daniel Geschwind, the Gordon and Virginia MacDonald Distinguished Chair in Human Genetics and professor of neurology and psychiatry at UCLA’s David Geffen School of Medicine at UCLA.

The mystery of 'regulatory regions'

Schizophrenia has long been known to be highly genetic; it often runs in families. A large genome-wide association study of people with schizophrenia, published in 2014, linked the disorder to small DNA variations at more than 100 distinct locations on the human genome, which is the complete set of DNA for humans. However, most of those locations lie outside of actual genes, so their roles in schizophrenia have been unclear. Genome-wide study analyses of other major diseases have come up with similarly puzzling results.

In some cases, the non-gene locations identified in these studies have turned out to be what are known as “regulatory regions,” which serve to enhance or repress the activity of genes lying near them on the genome. But many of these disease-linked locations have no obvious gene target nearby on the genome.

One possibility is that these mysterious disease-linked locations are also regulatory regions that target genes lying relatively far away on the genome. They could do this if they are brought physically close to those “distant” genes by the complex twisting and looping that DNA undergoes when packaged into a chromosome, just as two opposite ends of a rope can end up close together when the rope is coiled.

To investigate that possibility, Geschwind and his team used a relatively new, high-resolution version of a technology called “chromosome conformation capture,” which chemically marks and then maps the locations where loops of chromosomal DNA come into contact.

Because each cell type in the body can have subtly different 3-D chromosome structures, the researchers applied the technique to immature human brain cells from the cortex — the large region across the top of the brain that handles higher cognitive tasks. Schizophrenia is believed to be a disorder of abnormal cortical development.

Evidence acetylcholine can help cause the disorder

The mapping revealed that most of the more than 100 schizophrenia-linked sites from the 2014 study contact known genes during brain development. Many of these are genes that already have been linked to schizophrenia in previous studies. Others had been suspected of involvement, for example because their level of activity in schizophrenics is known to be abnormal in the cortex.

The genes newly linked to schizophrenia in the study include several for brain cell receptors that are activated by the neurotransmitter acetylcholine, implying that variations in the functions of these receptors can help bring about schizophrenia.

“There’s a lot of clinical and pharmacologic data suggesting that changes in acetylcholine signaling in the brain can worsen schizophrenia symptoms, but until now there’s been no genetic evidence that it can help cause the disorder,” Geschwind said.

The analysis also pointed for the first time to several genes that are involved in the early-life burst of brain cell production that gives rise to the cerebral cortex of humans.

In all, the researchers identified several hundred genes that may be abnormally regulated in schizophrenia but had not been linked to the disorder before. In further experiments and analyses of two dozen of those genes, they found additional evidence of abnormal regulation in schizophrenia.

Strategy can be used to explore autism, other disorders

As further studies clarify the roles of these genes in schizophrenia, scientists will get a more complete picture of how the disorder develops and persists, and should then be able to develop more effective treatments.

“In the near term we’re using the findings from this study to help us understand schizophrenia better, but we’re also planning to apply this same strategy to identify key genes in the development of autism and other neurodevelopmental disorders,” Geschwind said.

In principle, the 3-D chromosome mapping technology can be used to make sense of gene association data for any disease involving genetic risk. This same approach also can be used to discover relationships between genes and their regulatory regions in ordinary biological processes.