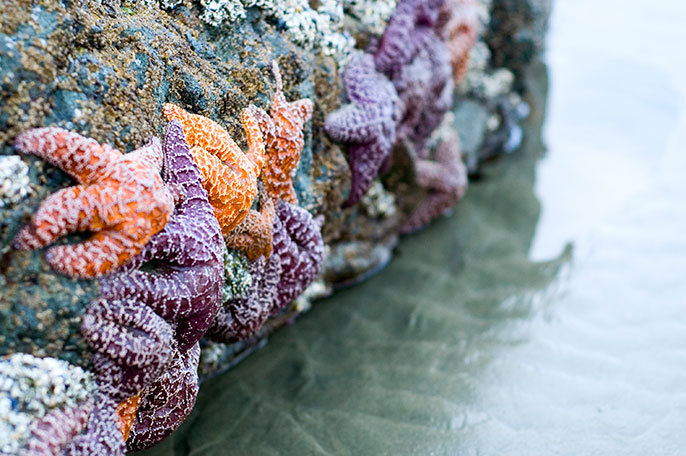 At some locations along the Pacific Coast, sea star populations that once numbered in the hundreds have dwindled to a handful.

A mysterious disease that causes sea stars to wither and die has become widespread along the entire west coast of the United States.

UC Santa Cruz scientists are tracking the outbreak of 'sea star wasting syndrome,’ trying to pinpoint the pathogen that is causing sea star populations to crash.

Time is of the essence. Sea stars play an important role in healthy coastal environments, but conditions for them could worsen if an El Niño weather pattern emerges this summer and fall as forecast. El Niño brings warmer ocean temperatures, conditions that make the disease spread faster and become more virulent.

Raimondi and other UC Santa Cruz scientists had observed small occurrences of the disease on the West Coast before, but the scale of this outbreak is different.

Since first being detected in Washington in June 2013, the disease has spread north to Alaska and south into Mexico. It attacks sea star immune systems, triggering an infection that causes their bodies to decay and their arms to fall off. The animals die within a matter of days.

In some Pacific Coast locations monitored by the program, sea star populations that once numbered in the hundreds have dwindled to a handful.

The disease targets several species of sea stars. It is likely transmitted by a pathogen, but scientists don’t know what type or its origin, said Raimondi, who is chair of the Department of Ecology and Evolutionary Biology at UC Santa Cruz.

Sea stars are one of the thousands of species of marine life tracked by the monitoring program, which has three decades of data and tracks marine life in coastal environments that straddle the ocean and land.

The monitoring program got its start in 1991 when the federal Minerals Management Service wanted to establish baseline biological data in case of an oil spill along the California coast.

The program has grown to about 200 monitoring sites from Alaska to Mexico and has collected a vast amount of publicly available data.

Government agencies and others use the information as a baseline for assessments of marine protected areas and coastal environments. The program provided data used to evaluate damage from the 2007 Cosco Busan tanker spill in San Francisco Bay.

The data also is being used to monitor the effects of climate change on marine life.

“If there is global warming, there will be a change,” Raimondi said. “We haven’t seen this yet, but we’ve got data to form a baseline, and we’re sampling continuously.”

A priority for the program now is sea stars, which are considered a key species in the coastal ecosystem.

Data on where and when outbreaks are occurring is being collected from a network of scientists and citizens on an interactive map. The information could help scientists determine the disease’s origin and cause, Raimondi said.

“What’s most important is not what it is, but where it came from and why now?” Raimondi said.

The cause could be a native pathogen that’s transformed into a more dangerous form or something newly introduced to the environment.

“If it’s local, we need to figure out what caused it to go bad,” Raimondi said. “It could be exotic. If so, where did it come from? If we can find that out, we can figure out how likely it is to spread to other species.”

A decline in the sea star population could alter the environment by allowing their favorite meal — mussels — to dominate rocky shores.

“It could be a different place. When you take out a top predator, other species are going to be more abundant,” Raimondi said. “From an ecological standpoint, it’s not a bad or a good thing, it’s a true thing.”