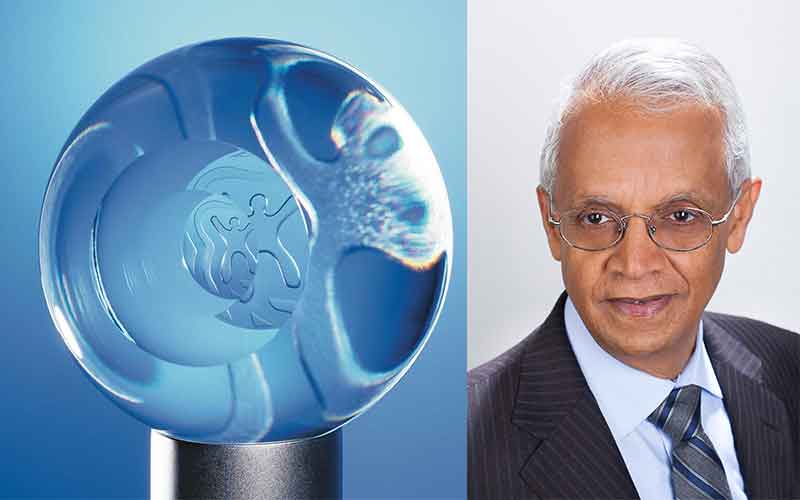 Ramanathan, the Edward A. Frieman Endowed Presidential Chair in Climate Sustainability at Scripps, has spent decades investigating the climate effects of global warming pollutants other than carbon dioxide. He helped uncover of the role of short-lived climate pollutants (SLCPs) such as methane, tropospheric ozone, halocarbons (HFCs), and black carbon. His contributions include the discovery of the super-greenhouse effect of chlorofluorocarbons, and clarification of the climate effects of black carbon through an international field project he led on Atmospheric Brown Clouds (ABCs).

“This prize is like the North Star for me since it will amplify my climate solution efforts – bridging gaps across political chasms and bringing science into alliance with policy and faith for climate actions,” said Ramanathan.

“This prestigious recognition of Professor Ramanathan’s groundbreaking work in atmospheric science and advocacy is well deserved,” said UC San Diego Chancellor Pradeep K. Khosla. “His collaborative and interdisciplinary research has advanced the frontiers of knowledge, shaped a new field of study, and led to discoveries that have and will continue to transform many lives.”

Ramanathan joined Scripps Institution of Oceanography in 1990, having already garnered a reputation as one of America’s leading climate scientists. Early in his career, he had observed the greenhouse effect of ozone-depleting industrial chemicals and made groundbreaking measurements of planet Earth’s heat budget. He also demonstrated that aerosol pollutants such as black carbon soot could contribute significantly to global warming while also endangering public health and diminishing crop yields.

Going beyond the science of climate change

In the 2000s, a series of events led Ramanathan to step beyond field research to tackle climate change in other ways. Pope John Paul II appointed him to the Pontifical Academy of Sciences, an advisory panel. In recent years, Ramanathan has engaged with the American evangelical community and faith leaders including the Dalai Lama on the need to protect creation and press for environmental justice.

"Few scientists have provided service to society in such a variety of ways," said Scripps Oceanography Director Margaret Leinen.

"In the first act of his career, he made the world understand that there are pollutants beyond carbon dioxide that are heating the planet. Now in his second act, he has established that climate change is an issue that requires scientists, humanists and religious leaders to work together. He has made it much easier for the public to take an active role in protecting the planet through his online educational offerings and he has shown how society can score early easy wins in slowing the pace of global warming."

Ramanathan becomes the second Scripps scientist to receive the prestigious award, which has been given to many of the world’s leading climate researchers. In 1993, the second year of the award, Charles David Keeling, the namesake of Scripps Oceanography’s iconic Keeling Curve, received the honor. The Keeling Curve is a program Keeling established to measure concentrations of the chief human-caused greenhouse gas, carbon dioxide, in the atmosphere.

This year’s fellow recipient of the Blue Planet Prize is Mohan Munasinghe, the founder and chairman of the Munasinghe Institute for Development (MIND). Munasinghe pioneered the integrative, transdisciplinary ‘Sustainomics’ framework which views development issues from environmental, social, and economic perspectives. Innovative concepts like ‘balanced inclusive green growth (BIGG)’ and ‘millennium consumption goals (MCGs)’ emerged from Sustainomics. BIGG calls for each country to take a sustainable development path in accordance with its development stage, while the MCGs ask the affluent, who consume most global output, to adopt consumption goals to reduce the burden on the planet. He has been developing practical activities using environmental economics and policy to implement these concepts worldwide.

According to the Asahi Glass Foundation, each recipient is presented with a certificate of merit, a commemorative trophy, and 50 million Japanese yen in prize money. The Award Ceremony is scheduled to take place on Oct. 6, 2021 at Tokyo Kaikan. Commemorative lectures will be given on Oct. 7 and 9, 2021, at United Nations University (Shibuya Ward, Tokyo) and at Kyoto University, respectively.