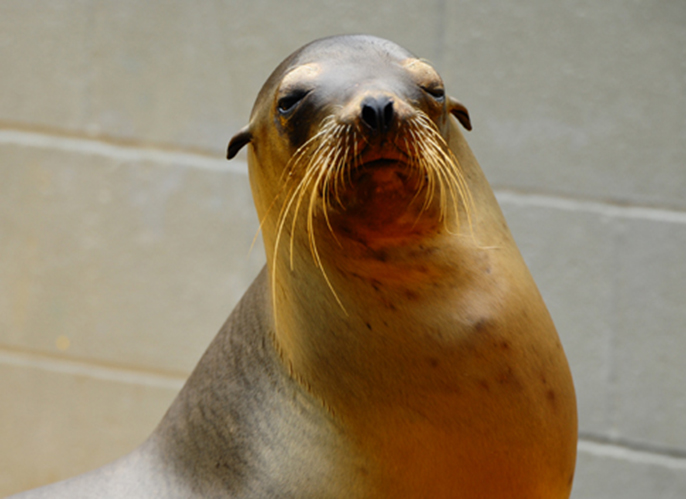 California sea lions exposed to the algal toxin domoic acid can suffer brain damage that leads to significant deficits in spatial memory, according to a study to be published in the Dec. 18 issue of Science. The new findings suggest that chronic exposure to the toxin, produced by naturally occurring marine algae, causes impairments that are likely to affect sea lions' ability to navigate in their ocean habitat and survive in the wild.

Domoic acid, a potent neurotoxin, captured headlines this year after it was detected in Dungeness crabs, prompting authorities to delay the opening of the crab season on the west coast. For California sea lions, however, the toxin has been causing problems for years. Hundreds of sea lions strand on California beaches every year with symptoms of domoic acid poisoning, including disorientation and seizures. Prior research has characterized the clinical effects of the toxin, but the behavioral effects of domoic acid poisoning in wild animals had not been assessed.

A team led by scientists at the University of California, Santa Cruz, studied 30 California sea lions undergoing veterinary care and rehabilitation at the Marine Mammal Center in Sausalito. Researchers administered behavioral tests to assess spatial memory and performed brain imaging (MRI) to see the extent of brain lesions in the affected animals.

Damage to the hippocampus, a part of the brain involved in memory, is often seen in sea lions with domoic acid poisoning, according to first author Peter Cook, who led the study as a graduate student at UC Santa Cruz and is now at Emory University. "In this study, we were able to correlate the extent of hippocampal damage to specific behavioral impairments relevant to the animals' survival in the wild," Cook said.

The study documented impaired performance on short- and long-term spatial memory tasks in animals with hippocampal lesions. These deficits are likely to interfere with a sea lion's ability to find food and may also help explain anecdotal reports of sea lions showing up in unusual places far outside their normal range, either too far out at sea or inland far from the coast, according to coauthor Colleen Reichmuth, director of the Pinniped Cognition and Sensory Systems Laboratory at UC Santa Cruz where the behavioral tests were conducted.

Domoic acid is produced by microscopic algae (diatoms in the genus Pseudo-nitzschia) that occur naturally in coastal waters. Blooms of the toxic algae along the California coast typically occur in the spring and fall and last just a few weeks, but they have been increasing in frequency and severity. This year's massive bloom, the largest ever recorded, lasted through the summer and extended from Santa Barbara to Alaska.

During a Pseudo-nitzschia bloom, domoic acid accumulates in shellfish and small fish such as anchovies and sardines that feed on algae filtered from the water. Animals that feed on those fish, including sea lions and other marine mammals and seabirds, can be exposed to high levels of the toxin.

The sea lion study was carried out over several years, and the researchers tested animals with and without symptoms of brain damage caused by exposure to domoic acid. Cook noted that during an algal bloom, sea lions brought to The Marine Mammal Center with acute domoic acid poisoning may not yet have permanent brain damage. Acute poisoning can cause seizures and disorientation, but brain lesions develop over time, likely as a result of a chronic epileptic condition caused by one or more exposures to the toxin, he said. Sea lions with symptoms of brain damage strand on beaches all year round, even when there is no active bloom of the toxic algae.

"What isn't well understood yet is the dose response," Cook said. "We don't know how heavy the exposure needs to be, or how often repeated, to cause this kind of brain damage, and we don't know the effects of repeated low-dose exposure."

In addition to assessing the behavioral effects of brain damage, the research team also used functional MRI to look at the effects of domoic acid exposure on important brain networks. They found that sea lions with symptoms of toxic exposure had greatly reduced connectivity between the hippocampus and the thalamus, a pathway known to be essential for the formation of episodic memory (memories of events or experiences) in rodents and humans.

"This is the first evidence of changes to brain networks in exposed sea lions, and suggests that these animals may be suffering a broad disruption of memory, not just spatial memory deficits," Cook said. "It's rare to have this type of experimental evidence linking a naturally occurring neurotoxic effect to behavioral impairment in a wild animal. There are thousands of California sea lions with varying degrees of exposure to domoic acid out there. Sea lions navigate a complex and changing environment, and if their spatial memory is impaired it's bound to affect their ability to survive in the wild."