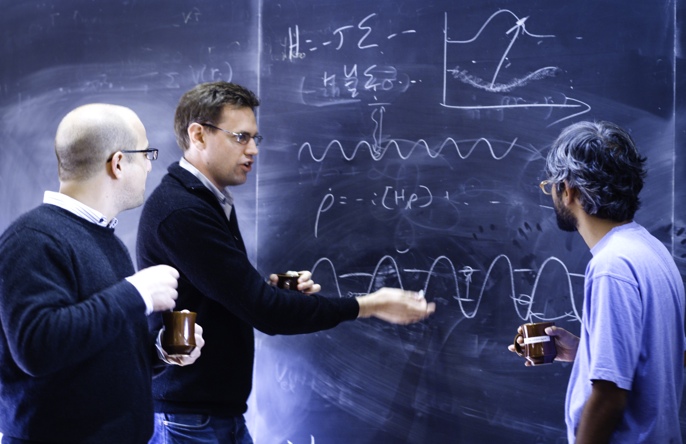 A team of researchers at UC San Francisco has uncovered the neurological basis of speech motor control, the complex coordinated activity of tiny brain regions that controls our lips, jaw, tongue and larynx as we speak.

Described this week in the journal Nature, the work has potential implications for developing computer-brain interfaces for artificial speech communication and for the treatment of speech disorders. It also sheds light on an ability that is unique to humans among living creatures but poorly understood.

“Speaking is so fundamental to who we are as humans — nearly all of us learn to speak,” said senior author Dr. Edward Chang, a neurosurgeon at the UCSF Epilepsy Center and a faculty member in the UCSF Center for Integrative Neuroscience. “But it’s probably the most complex motor activity we do.”

A symphony of 'articulators'

The complexity comes from the fact that spoken words require the coordinated efforts of numerous “articulators” in the vocal tract — the lips, tongue, jaw and larynx — but scientists have not understood how the movements of these distinct articulators are precisely coordinated in the brain.

To understand how speech articulation works, Chang and his colleagues recorded electrical activity directly from the brains of three people undergoing brain surgery at UCSF, and used this information to determine the spatial organization of the “speech sensorimotor cortex,” which controls the lips, tongue, jaw, larynx as a person speaks. This gave them a map of which parts of the brain control which parts of the vocal tract.

They found that this cortical area has a hierarchical and cyclical structure that exerts a split-second, symphony-like control over the tongue, jaw, larynx and lips.

“These properties may reflect cortical strategies to greatly simplify the complex coordination of articulators in fluent speech,” said Kristofer Bouchard, a postdoctoral fellow in the Chang lab who was the first author on the paper.

In the same way that a symphony relies upon all the players to coordinate their plucks, beats or blows to make music, speaking demands well-timed action of several various brain regions within the speech sensorimotor cortex.

The patients involved in the study were all at UCSF undergoing surgery for severe, untreatable epilepsy. Brain surgery is a powerful way to halt epilepsy in its tracks, potentially completely stopping seizures overnight, and its success is directly related to the accuracy with which a medical team can map the brain, identifying the exact pieces of tissue responsible for an individual's seizures and removing them.

The UCSF Comprehensive Epilepsy Center is a leader in the use of advanced intracranial monitoring to map out elusive seizure-causing brain regions. The mapping is done by surgically implanting an electrode array under the skull on the brain’s outer surface or cortex and recording the brain’s activity in order to pinpoint the parts of the brain responsible for disabling seizures. In a second surgery a few weeks later, the electrodes are removed and the unhealthy brain tissue that causes the seizures is removed.

This setting also permits a rare opportunity to ask basic questions about how the human brain works, such as how it controls speaking. The neurological basis of speech motor control has remained unknown until now because scientists cannot study speech mechanisms in animals and because non-invasive imaging methods lack the ability to resolve the very rapid time course of articulator movements, which change in hundredths of seconds.

But surgical brain mapping can record neural activity directly and faster than other noninvasive methods, showing changes in electrical activity on the order of a few milliseconds.

Prior to this work, the majority of what scientists knew about this brain region was based on studies from the 1940s, which used electrical stimulation of single spots on the brain, causing a twitch in muscles of the face or throat. This approach using focal stimulation, however, could never evoke a meaningful speech sound.

Chang and colleagues used an entirely different approach to studying the brain activity during natural speaking brain using the implanted electrodes arrays. The patients read from a list of English syllables — like bah, dee, goo. The researchers recorded the electrical activity within their speech-motor cortex and showed how distinct brain patterning accounts for different vowels and consonants in our speech.

“Even though we used English, we found the key patterns observed were ones that linguists have observed in languages around the world – perhaps suggesting universal principles for speaking across all cultures,” said Chang.

The article, “Functional organization of human sensorimotor cortex for speech articulation” is authored by Kristofer E. Bouchard, Nima Mesgarani, Keith Johnson and Edward F. Chang. It appears in the Feb. 20, 2013 issue of the journal Nature. After this date, the article can be accessed at http://dx.doi.org/10.1038/nature11911.