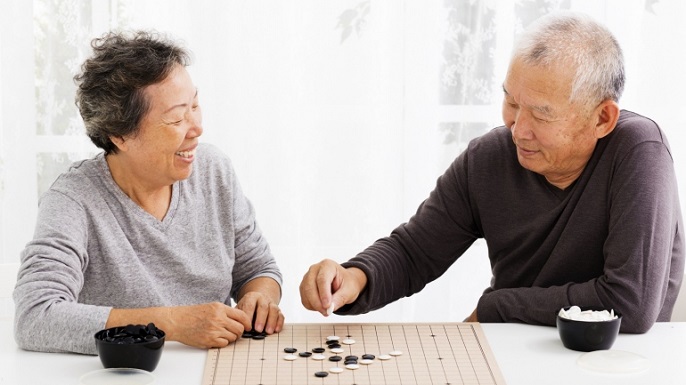 Around the world, women outlive men. This is true in sickness and in health, in war and in peace, even during severe epidemics and famine. In most animal species, females live longer than males.

Now, scientists at UC San Francisco have zeroed in on a possible genetic mechanism for this highly durable phenomenon, that — while it does not preclude the influence of other biological, social and environmental factors — suggests an important role for the second X chromosome, which is present in female mammals. The X chromosome contains many genes related to the brain, and it is crucial for survival. Without at least one X, an animal cannot live. The Y chromosome, present only in males, contains very few genes other than those that create secondary sex characteristics, like male genitals and facial hair, and it is not necessary for survival.

The researchers gave experimental mice four different combinations of chromosomes and gonads: the two found in nature — XX with ovaries and XY with testes — and two others created in the laboratory — XX testes and XY ovaries. The mice were genetically identical except for their sex chromosomes, but even when everything else about them, including their environment, was the same, having two X’s promoted survival. When two X’s were combined with ovaries, the mice lived to the furthest edges of the mouse lifespan.

“We’ve long wondered what causes female longevity,” said Dena Dubal M.D., Ph.D., associate professor of neurology at UCSF and senior author of the study published in Aging Cell. Dubal is the David Coulter Endowed Chair in Aging and Neurodegenerative Disease, and a member of the Weill Institute for Neurosciences at UCSF. “One can imagine nature has driven females to evolve this way. When you’re living longer, you can really ensure the well-being of your offspring, and maybe even their offspring.”

The experiment, conducted by Emily Davis, a student in the Biomedical Sciences Graduate Program at UCSF, is the first mechanistic study to show that females live longer than males, and that XX largely governs this trait in aging mice. It took several years to complete, since the mice were observed until they either died or survived until 30 months. Dubal and her team used the Four Core Genotypes (FCG) model developed two decades ago and then championed by UCLA scientist Arthur Arnold, Ph.D., for rigorous study of sex differences.

The technique manipulates the Sry gene, which normally resides on the Y chromosome and causes testes and other masculine features to develop. In the FCG mice, Sry has been moved to a different chromosome that does not determine sex, so it can be inherited whether or not a mouse has a Y chromosome.

The researchers found that having both female sex chromosomes and female gonads extended life in mice that were 12 to 30 months old, the mouse equivalent of midlife to old age. But most of the effect came from the sex chromosomes. The XX mice lived longer than the XY mice, whether either one had ovaries or testes. But the mice that lived the longest had ovaries, in addition to two X chromosomes — in other words, they displayed natural female mouse biology.

“This suggests that the hormones produced by female gonads increase lifespan in mice with two X chromosomes, either by influencing how the mouse develops or by activating certain biological pathways during their lives,” Dubal said.

When comparing the two different types of genetically female mice — those with ovaries and those with testes — the researchers found having two X’s plus ovaries enabled mice to live longer, beginning at 21 months, which is toward the end of a normal mouse lifespan. But for the laboratory mice who were genetically female but hormonally male — two X’s plus testes — the second X chromosome only protected them from dying earlier in life without extending their lives beyond the normal mouse lifespan. These benefits trailed off by the time the mice were 23 months old.

“For an expanded lifespan, the mice needed to have ovaries working with XX,” said Iryna Lobach, Ph.D., assistant professor of epidemiology and biostatistics at UCSF, who did the statistical analysis that found these cutoff points. “But in terms of living a normal lifespan, it didn’t matter if they had ovaries or testes. As long as they had XX, they escaped early death during aging.”

A neurologist and neuroscientist who specializes in healthy aging, Dubal is actively investigating how the X and Y chromosomes exert such far-reaching influences.

“We don’t yet understand how the second X chromosome decreases mortality in aging,” she said.

But there is much in the scientific literature to suggest the profoundly protective effect of having a second X chromosome. In females, half of the XX pair is randomly “silenced” — or turned off — in each cell of the body. So when there are defects, cells with the healthy X can compensate for those with the unhealthy X. And even without defects, the X that is silent still expresses itself somewhat, causing more X chromosome to be expressed in each female cell compared to male cells. Dubal said another possible explanation, which remains to be tested, is that the Y could somehow be harmful.

“When things go wrong in aging, having more of the X chromosome, along with its diversity of expression, could be really beneficial,” Dubal said.