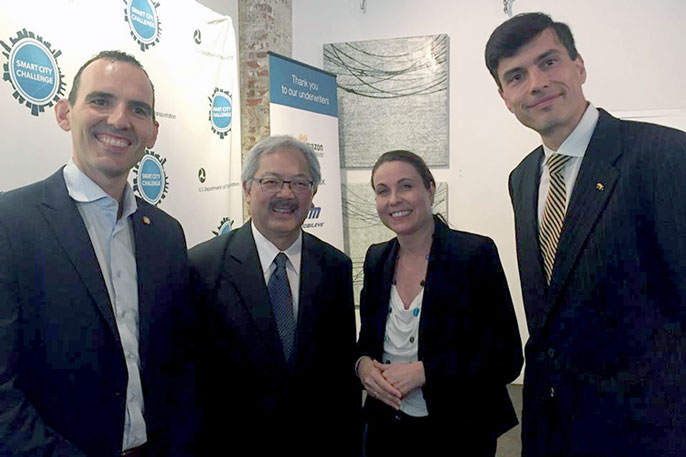 From his days as a young law student living on Blake Street to his time as the mayor of California’s fourth-largest city, Ed Lee was deeply connected to UC Berkeley’s community, friends and former colleagues said.

Lee, a 1978 graduate of Berkeley Law, then called Boalt Hall, died early Tuesday at San Francisco General Hospital after suffering a heart attack. He was 65. He was San Francisco’s first Asian-American mayor and a longtime civil rights attorney and civil servant before being appointed to office in 2011.

Even as he governed a city of 800,000 with an annual budget of nearly $9 billion, Lee maintained his association with his graduate alma mater.

As mayor, Lee regularly turned to UC Berkeley for help with San Francisco’s most vexing problems, whether it was working with the school’s seismology lab to develop an earthquake early warning system or asking the Institute of Transportation Studies to examine how self-driving cars could impact his city.

He often hired summer and academic interns from UC Berkeley, and expected them to take on serious issues and put in long hours. Lee, ever affable and supportive, wouldn’t miss the chance to shout “Go Bears!” when he saw them.

“We will miss his leadership, even as we honor the role he played in forming a partnership that is harnessing Berkeley’s research expertise to confront urban challenges and advance the greater good,” Chancellor Carol Christ said. “We extend our sincere condolences to Mayor Lee’s family, friends and supporters.”

Much of what Lee’s philosophy for social justice can be traced back to this three years at Berkeley Law, when he was widely recognized as a student committed to protecting the rights of those around him.

“Ed was a very idealistic and committed young man who was interested in social justice and very interested in immigrant rights and helping people who were less fortunate,” said David Louie, a Berkeley Law graduate and former attorney general of Hawaii who lived with Lee on Blake Street. “He was a very bright, very articulate, very passionate individual.”

Even during long, late-night meandering conversations in their apartment, Lee would focus on politics and civil rights. Lee was in the minority of students at the law school who weren’t white.

“I don’t think he found (the classwork) overly difficult,” Louie said. “I think he mastered the material. I think he was more interested in how the law could be employed to help people.”

As an intern with Asian Law Caucus, he represented residents of the Ping Yuen public housing complex in San Francisco and helped organize the first rent strike against the San Francisco Housing Authority. The authority agreed to improve conditions after Lee threatened to use “whatever avenues we have” to solve the tenants’ problems.

After graduating, Lee began a distinguished career as a civil rights attorney, often representing low-income tenants. In 1989, Lee represented Asian and female firefighters who successfully sued the city for discrimination at the Fire Department.

A few years later, Lee began working for San Francisco as director of its Human Rights Commission. By 2005, he had become city administrator, a quiet, demure man responsible for the administration of the sprawling government.

That changed in 2011 when then-Mayor Gavin Newsom was elected California lieutenant governor. San Francisco’s Board of Supervisors appointed Lee to replace him, and he won reelection as mayor in 2011 and 2015.

“I think he had a total appreciation for Berkeley,” said Moskowitz, who regularly fielded calls from Lee’s chief innovation officer and often accompanied UC Berkeley experts when they traveled to City Hall to brief Lee. “He would always comment how Berkeley was a great public research university in our midst.”

“He was just happy that Berkeley was working on his projects,” Moskowitz said.

“The ability to have a research center that tests everything, that documents hypothesis, that measures things in incredibly important to the outcome,” Lee said at the time.

Beyond his work, Lee’s story motivated many Berkeley students who appreciated his commitment to civil rights.

“His background as an immigrant and civil rights lawyer was really inspiring,” said Sarah Vasquez Lightstone, a 2013 UC Berkeley graduate who interned with Lee in 2012. “He was a really good guy and cared about the issues that San Francisco faces.”

Almost as soon as she started interning in Lee’s communications office, Lightstone was asked to help organize major events relating to the new hospital in Mission Bay and the construction of a new Warriors basketball arena.

The experience of working with Lee, in part, led Lightstone, 26, to Harvard Law School, where she is in her second year.

“A lot what I learned in that job was how to be public facing and sensitive in what you were doing,” Lightstone said. “I felt that in all of his public appearances and comments, Lee really knew the policy and the issues. That’s what lawyers do, and I felt he had that kind of analytical understanding of things.”

And Lee never forgot to notice the contributions of his interns.

“Whenever he saw me he would say ‘Go Bears!,” Lightstone said. “I feel like he really cared about the Cal community.”