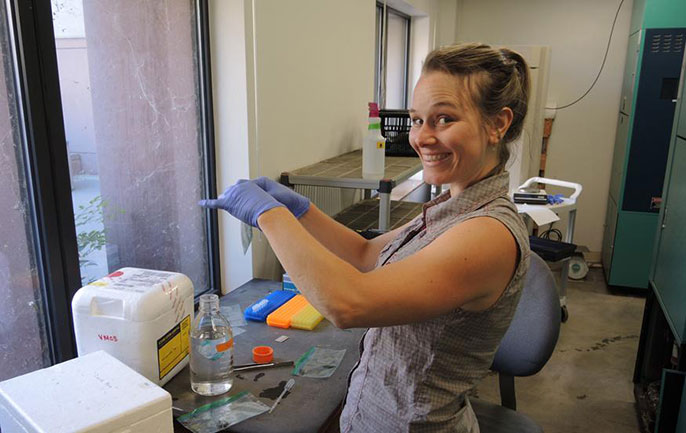 Plant biologist Sharon Gray in the lab: Serious scientist with an "infectious smile and giggle."

Sharon Gray’s work in Ethiopia is not done.

The 30-year-old UC Davis postdoc had gone to the African nation to discuss the start of a plant biology research project. She and others — including Associate Professor Siobhan Brady — were in a car, driving on the outskirts of the capital city, Addis Ababa, when a rock came crashing through a window, striking and killing Gray. Brady was not injured.

The Netherlands Institute of Ecology, which also is involved in the research project, said Gray’s death was not a direct consequence of the large-scale protests that are impacting Ethiopia, but, rather, the result of a random act of a few young individuals throwing stones at passing vehicles.

Before the tragedy, something wonderful had happened. According to her husband, R.J. Cody Markelz, also a UC Davis postdoc in plant biology, Gray had met a young Ethiopian scientist who, in her lab, had access to a wide range of molecular equipment and tools, but needed training in how to use them. “Sharon really wanted to bring her to UC Davis for training and was so motivated to remove this barrier to learning when the resources were already in place,” Markelz said.

Now, to preserve her legacy of mentorship, and hopefully bring this scientist to the United States, Gray’s family is raising money via GoFundMe to mentor women in science. “The mission of this current campaign is to make something positive out of this tragedy,” Markelz wrote for the GoFundMe site.

He said the family is discussing the exchange proposal with multiple institutions, including UC Davis and the University of Illinois at Urbana-Champaign, where Gray received her Ph.D. Meanwhile, as of around 12:45 p.m. today (Oct. 11), the GoFundMe drive had raised more than $63,000 toward its $200,000 goal.

Overseas and at home, Gray had never let her graduate studies or postdoctoral fellowship get in the way of her mentoring. “We all only have 24 hours in the day and mentoring can take away from research commitments,” Markelz told Dateline UC Davis. “Sharon always did an amazing job at balancing research with mentoring and all of the other responsibilities that come with being a Ph.D. student and postdoc.”

She mentored undergraduates at Urbana-Champaign and UC Davis, and high school students, too, from Davis High and Pioneer High in Woodland.

UC Davis alumna An Nguyen had Gray as a mentor for two years before graduating recently with a degree in biotechnology. “The last year that I worked with her, she helped me finish a senior thesis,” Nguyen said. “She was always generous with her time and very supportive.

“Often, she would make time to get to know me better as a person, not just as a student. When we would work late to finish up our experiments, she would boil a cup of hot water to share tea with me.”

At times when Nguyen doubted whether she had chosen the right career track for her, “Sharon always offered words of reassurance and reminded me that being a woman in STEM is very important,” Nguyen said. “We both shared this ideal from the beginning, but with heavy amounts of schoolwork and projects, it is easy to forget.

“Sharon meant a lot to me and was a big part in the success of my undergraduate career,” said Nguyen, who is now working in the biotech industry. “I couldn’t have done it without her support. Even now, I aspire to be able to give the same valuable mentorship to someone else as she had done for me.”

“I hope others will remember her as I do, as a loving, caring and supportive woman who was passionate in the field of science.”

'A true expert in her field'

Associate Professor Brady said Gray dedicated her research to understanding plants’ responses to climate change. Her graduate work focused on the response of soybean plants to high carbon dioxide in the presence of drought and showed that plants did not respond as the scientific community had anticipated.

“Previous research had suggested that plants would have a higher yield in high carbon dioxide,” Brady said in a statement. “In the presence of drought, however, these increases were not observed. This work showed that more research is needed to face our agricultural challenges in the future of climate change.”

Gray had just completed her NSF-funded postdoc project characterizing the responses of a drought-tolerant wild species of tomato and a drought-sensitive domesticated species of tomato. “I anticipate that once published, these results will also provide important perspective needed when breeding plants in environments that are changing,” Brady said.

“Sharon was a true expert in her field of root development and plant physiology. She had a very bright future ahead of her and I was sure she was to be a leader in plant biology and a wonderful mentor.”

Savithramma Dinesh-Kumar, professor and chair of the Department of Plant Biology, told theLos Angeles Times: “She’s a smart, energetic scientist. … Everyone knew she was going to be the star in the plant biology research area.”

Gray attended the University of Illinois at Urbana-Champaign for both her Bachelor of Science degree in integrative biology (2006) and Ph.D. in the Department of Plant Biology, writing her thesis on “Interactive Effects of Elevated Carbon Dioxide Concentration and Water Availability on Field‐Grown Soybean” (2013).

She and Markelz came to UC Davis in December 2012, she for a National Science Foundation Research Fellowship in the Brady Lab and he for an NSF fellowship in Julin Maloof’s lab (with Dan Kliebenstein as co-mentor).

Markelz and Gray, both from Illinois, met as freshmen at Urbana-Champaign, in an introductory biology class. “We were friends for many years before dating during graduate school,” Markelz said. They were married Aug. 22, 2014, at Starved Rock State Park overlooking the Illinois River. She liked the outdoors, for sure, for cycling, running, backpacking and rock climbing, as well as music and cooking.

“Sharon was currently applying for academic faculty positions. We had planned on working together at the same academic institution.” — Cody Markelz

A co-author credits her mentor

Gray had a record of publications going back to 2010, the most recent of which was posted Sept. 5 on the Nature Plants website. Titled “Intensifying Drought Eliminates the Expected Benefits of Elevated Carbon Dioxide for Soybean,” the paper reflects work she did for her Ph.D. at the University of Illinois.

Stephanie Klein was an undergraduate at Illinois when she assisted Gray on her graduate research in 2011 and 2012, and is a co-author — her first such listing — on the Nature Plantspaper.

“Eventually, I wrote about this data for my senior thesis and became so interested in roots that I wanted to study it for my Ph.D.,” Klein told Dateline UC Davis.

“Sharon unquestionably made a huge impact on my personal and professional life. Without her guidance, patience, generosity and enthusiasm, I surely would not be pursuing a Ph.D. at Penn State studying roots. She played a huge role in my development as a very young scientist.”

‘A bright human being’

“Sharon was such a bright human being,” her family said in a statement Oct. 6. “We have been so lucky to have shared part of our lives with her. Sharon was a passionate scientist, friend, spouse, sister, daughter, aunt, godmother and a colleague. We are picking each other up and growing together in her absence.”

Her colleagues also remarked on the pleasure they derived from being around Gray. Said her department chair: “She’s really an always-smiling slip of sunshine.” Brady commented on Gray’s “uncommon kindness,” “infectious smile and giggle” and “calm and patient nature.”

Markelz said the family will have a memorial service for Gray, with details to be announced later.

Improving lives the world over

Campus leadership offered condolences in a message posted on the News and Information website Oct. 5. “Even in tragedy, we hope that we all can find some comfort in the wonderful work Sharon was engaged in that will better the lives of so many around the world,” wrote Ken Burtis, interim provost and executive vice chancellor, and Mark Winey, dean of the College of Biological Sciences.

Associate Professor Brady, in her Oct. 6 statement, wrote: “As a postdoc in my lab, she was a valuable team member, mentor and friend. We were looking forward to exploring Ethiopia together and working with the bright scientists we met over the last few days.”

Now, if all goes according to plan, at least one of those “bright scientists” will be one more beneficiary of Gray’s legacy of mentorship.