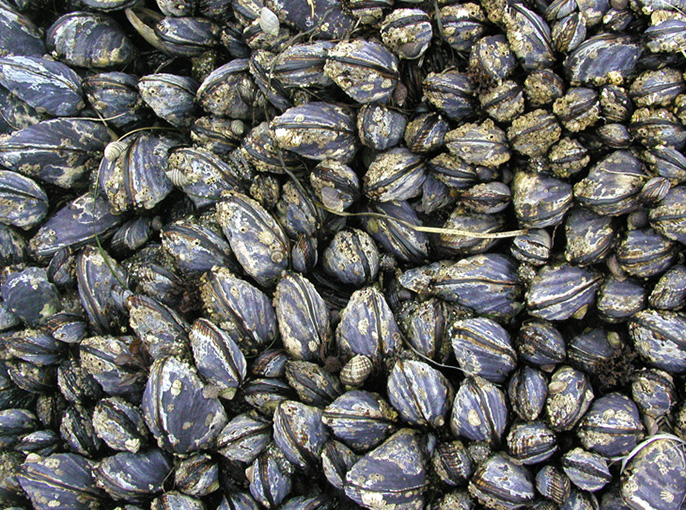 A study of California mussels, a key species in the rocky intertidal ecosystems of the West Coast, indicates that the effects of ocean acidification will vary from place to place along the coast depending on a range of interacting factors.

The study, published today (May 6) in Ecology Letters, looked at how juvenile mussels respond to varying environmental conditions at seven sites spread across 800 miles of coastline in California and Oregon. The results showed that the ability of mussels to cope with more acidic conditions depends largely on how much food is available to them, and both factors vary from place to place in a complex geographic mosaic of environmental and ecological conditions.

"Ocean acidification is likely to progress along our coastline as a patchwork of hotspots rather than a large blanket, and the background conditions in these hotspots can determine how species are affected," said first author Kristy Kroeker, assistant professor of ecology and evolutionary biology at UC Santa Cruz.

As the oceans absorb increasing amounts of carbon dioxide from the atmosphere, ocean acidification is expected to make life harder for many marine organisms, especially shellfish and other animals with shells or skeletons made of calcium carbonate. Acidification refers to a lowering of the pH of seawater when it absorbs carbon dioxide, pushing it closer to the acidic end of the scale, although it is still slightly alkaline. A small decrease in pH affects the chemical equilibrium of seawater, making it harder for organisms to build calcium carbonate structures.

For mussels, that can mean thinner shells, making them more vulnerable to predators like the dogwhelk, a marine snail that attacks mussels by drilling through their shells. The lower the pH, the more energy it takes to build a shell, so the food supply is crucial in determining how well mussels can cope with ocean acidification.

Kroeker's team took advantage of geographic variability in the wind-driven upwelling of cold, deep ocean water along the West Coast. That deep water is not only rich in nutrients, it also has relatively high concentrations of carbon dioxide, both because it is cold (cold water can absorb and hold more carbon dioxide than warm water) and because the decomposition of organic matter that sinks into the depths releases carbon dioxide. Ocean acidification is further increasing the acidity of that deep water.

"We can use the spatial differences in upwelling to study how species respond to seawater that's high in carbon dioxide," Kroeker said. "The upwelling of relatively acidic deep water is a natural process, but these waters will become even more acidic in the future."

The researchers looked at the effects of low-pH seawater, food availability, and temperatures on the growth and morphology of juvenile mussels at each site. They also tested the susceptibility of mussels from each site to drilling by dogwhelks.

The results showed that mussels actually grew fastest at sites with frequent low pH conditions as well as an abundant food supply. These sites tended to experience intermittent upwelling that supplies nutrients to surface waters, spurring blooms of algae and providing plenty of food for the filter-feeding mussels. They grew slowest and were most vulnerable to predators in locations exposed to low pH conditions and an inconsistent food supply. High body temperatures during low tides, another stressor for mussels, also made them more vulnerable to predation.

With continued ocean acidification and climate change, many locations will experience environmental conditions well beyond the range of conditions seen in this study. In trying to predict the impacts of environmental changes, it is crucial to look at multiple environmental drivers and how their co-occurrence and interactions are likely to shift geographically, Kroeker said.

"Most of our tools for managing coastal species and ecosystems -- such as marine protected areas and regulating point source pollution -- are spatially explicit, and this research illustrates there may be hotspots of vulnerability or resilience that we could protect or manage locally," she said.

In addition to Kroeker and co-first author Eric Sanford of UC Davis, the co-authors of the paper include Jeremy Rose, Francis Chan and Bruce Menge at Oregon State University; Carol Blanchette, Peter Raimondi and Libe Washburn at UC Santa Cruz; Francisco Chavez at the Monterey Bay Aquarium Research Institute; Brian Gaylord and Tessa Hill at UC Davis; Gretchen Hoffmann and Ann Russell at UC Santa Barbara; Margaret McManus at the University of Hawaii; and Karina Nelson at San Francisco State University. This work was funded by the National Science Foundation, University of California, and the David and Lucile Packard Foundation.