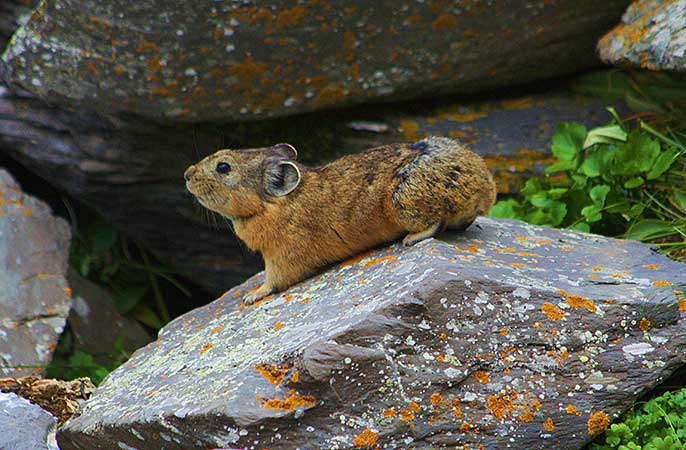 Pikas are disappearing from low elevation sites in the California mountains.

The American pika, a small animal with a big personality that has long delighted hikers and backpackers, is disappearing from low-elevation sites in California mountains, and the cause appears to be climate change, according to a new study.

Researchers surveyed 67 locations with historical records of pikas and found that the animals have disappeared from 10 of them (15 percent of the sites surveyed). Pika populations were most likely to go locally extinct at sites with high summer temperatures and low habitat area, said Joseph Stewart, a graduate student at UC Santa Cruz and first author of a paper reporting the new findings, published January 29 in the Journal of Biogeography.

"This same pattern of extinctions at sites with high summer temperatures has also been observed in the Great Basin region," Stewart said.

Pikas are small herbivores related to rabbits that live in fields of broken rock (called talus) in the mountains of western North America. With high metabolic rates and thick fur (including inside their ears and on the bottoms of their feet), they are well adapted to the cold temperatures at high elevations. Since they do not hibernate during winter, they spend the summer gathering grasses and wildflowers to store in "haypiles" for winter subsistence.

"Backpackers and hikers often see pikas scurrying back and forth across the rocks, gathering little bouquets of wildflowers in their mouths," Stewart said. "They are uniquely adapted to cold temperatures, but these same adaptations make the species vulnerable to global warming."

When summer temperatures are too high, pikas are forced to stay underground to avoid overheating. Less time spent foraging means they don't have as much food to eat, which increases the likelihood of local extinction.

The researchers used their data on where pikas have disappeared to develop a predictive model they could use to explore the fate of the species in the face of ongoing global warming. By 2070, the model predicts that pikas will have disappeared from much of their historical range in California (39 to 88 percent of sites). The severity of the decline will depend on how much summer temperatures actually rise. The researchers looked at a total of 34 different global climate model outputs, encompassing different degrees of atmospheric sensitivity to greenhouse gases and different levels of human emissions of greenhouse gases into the atmosphere.

"It looks like we're going to lose pikas from many areas where people have been used to seeing them. It's a loss not just for the pikas but also for future generations who won't get to have that experience," Stewart said.

Pikas also play important ecological roles, he said. They are prey to many species, such as owls and stoats, and they alter vegetation and soil composition through their foraging activities. Furthermore, he said, the shrinking range of pikas is just one example of the negative effects of global warming on plant and animal species around the world. Other high-elevation species, such as Belding's ground squirrel and whitebark pine, are also vulnerable and could lose a much larger proportion of their range. Stewart is currently working with UC Santa Cruz biologist Barry Sinervo to study the effects of climate change on the blunt-nosed leopard lizard, which also faces major losses of suitable habitat. Sinervo led a landmark study published in 2010 documenting the widespread extinction of lizard populations around the world due to climate change.

"Pikas are a model organism for studying climate change, and their decline at low-elevation sites suggests that the future for other species is not great either," Stewart said. "The problem is that the climate is changing faster than species can adapt or disperse to new sites."

Pikas and other high-elevation species can respond to warming temperatures by moving upslope to higher elevations. But in many locations the mountains just aren't high enough to provide a refuge from warming temperatures for high-elevation species. The study predicts that only the highest peaks of the southern Sierra Nevada, Mt. Shasta, and the White Mountains are likely to remain suitable for pikas through the end of the 21st century.