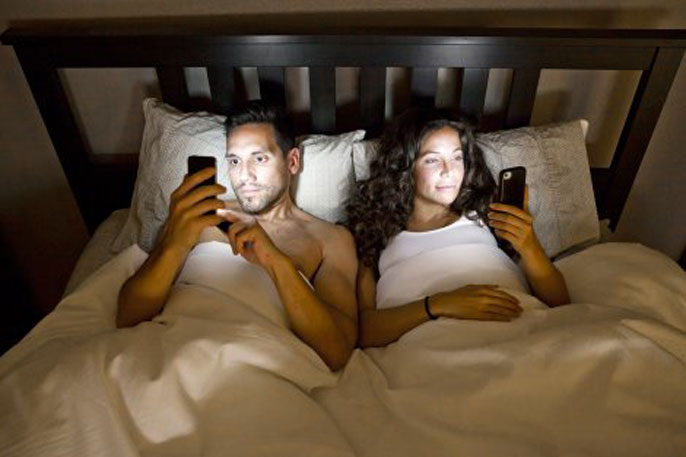 Smartphone use directly correlates with sleep, with greater use demonstrating a significant association with shorter sleep duration and worse sleep efficiency, according to researchers at UC San Francisco.

“Our study found that, not surprisingly, people spend a lot of time interacting with their phones,” said senior author Gregory Marcus, M.D., MAS, a UCSF Health cardiologist and director of clinical research in the UCSF Division of Cardiology. “This was the first study to examine such use in a broad population, directly measuring screen time rather than relying on self-reported use. And, those with more screen time use had poorer sleep.”

About 64 percent of American adults owned a smartphone in 2015, and an estimated 68 percent of owners store their phone on a bedside table while sleeping. Screen time differs across age and race but is similar across socioeconomic groups.

Previous studies have associated exposure to smartphone screens, particularly around bedtime, with poor sleep, but their frequency of use has not been objectively measured and compared to demographics, health information and sleep quality.

Poor sleep – either quantity or quality – has been shown as a risk factor for obesity, diabetes, cardiovascular disease, depression and overall mortality. Light in the blue spectrum, such as that produced by a smartphone, can suppress production of melatonin, leading to decreased drowsiness, difficulty initiating sleep and non-restorative sleep, the authors said.

In their PLOS ONE study, Marcus and his colleagues used a volunteer sample of 653 people (average age 42) from the more than 23,000 individuals enrolled worldwide in the UCSF Health eHeart Study as of Sept. 1, 2015. The ongoing Health eHeart Study, which currently includes nearly 80,000 consented participants toward a goal of 1 million, harnesses the power of online and mobile technology to gather cardiovascular data through devices such as smartphone apps, ECG smartphone cases and portable blood pressure cuffs.

The participants downloaded an app developed by Ginger.io for Android-based smartphones. The app recorded screen time continuously as the number of minutes in each hour the screen was on, as long as the phone was not in “airplane” mode and the app not turned off. Resulting data then was transmitted daily over the Internet to the study database.

Smartphone screen time was measured between Sept. 1, 2014, and Sept. 30, 2015. The total and average screen time was computed over selected 30-day windows for each participant. Participants provided baseline information on demographics, alcohol and tobacco use, mood, physical activity, and cardiovascular diagnoses.

In selected 30-day windows, total screen time exposure averaged 38.4 hours at an average 3.7 minutes per hour. After taking other factors into account, those who were younger and self reported as Black, Hispanic or “Other” race/ethnicity had longer average screen time.

“Increased screen time in the hour of and after bedtime, but not the hour before, was associated with greater sleep onset latency,” said lead author Matthew Christensen, UCSF research fellow. “This agrees with the notion that screen use just before attempting to fall asleep may be particularly problematic.”

Based on the International Physical Activity Questionnaire (IPAQ), a self-reporting survey that measures health-enhancing physical activity in adults, smartphone screen time was not associated with any change in physical activity level or body mass index (BMI). This could be attributable to the multi-functionality of smartphones or their use during physical activities, such as in running apps.

The researchers note these results may not be representative of the general population, and that study participants were predominantly female (75 percent) and Caucasian (75 percent). The authors said iPhones also were not used, multiple people could have used a single smartphone, and the screen could have been on while a participant was unaware.

Ginger.io Inc. provided support in the form of salaries for Kaye and Moturu, but it and the other funders did not have any additional role in the study design, data collection and analysis, decision to publish, or preparation of the manuscript.