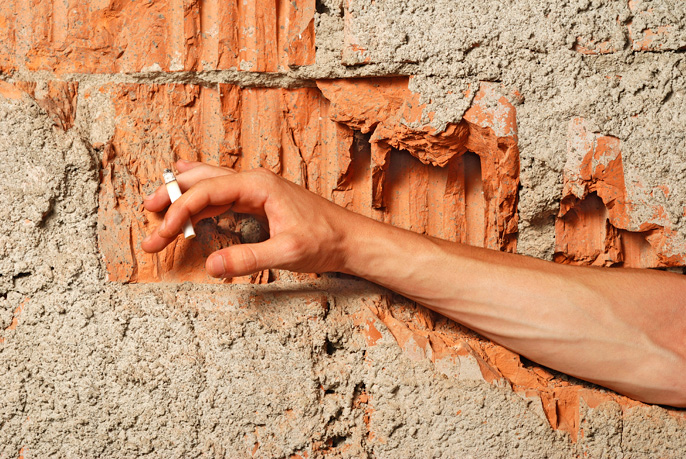 The Tobacco-Related Disease Research Program (TRDRP), admisnistered by the University of California, funds research that enhances understanding of tobacco use, prevention and cessation, the social, economic and policy-related aspects of tobacco use, and tobacco-related diseases in California.

Learn more about the latest findings from TRDRP-funded research.

A new study on smoking and unemployment has found that not only are the unemployed more likely to be smokers, but that tobacco use itself could make job prospects go up in smoke.

The study, published today in JAMA Internal Medicine by lead author Judith Prochaska of the Stanford University School of Medicine, found that unemployed smokers have a significantly harder time finding employment than nonsmokers.

“All of the previous studies that associated smoking with unemployment were cross-sectional: they only looked at a single point in time. There was no way to tell cause from effect,” said Prochaska.

Prochaska herself did a cross-sectional study that found unemployed job seekers in California were significantly more likely to be smokers than employed Californians.

“This is the first longitudinal study to follow job seekers, half of whom were daily smokers and half of whom were nonsmokers, over the course of a year. Knowing who was a smoker versus a nonsmoker, we wanted to see if the groups differed over time in their success with finding work,” said Prochaska.

Not only did smokers have a harder time finding work in the study, when smokers did find a job, their income was lower than nonsmokers, earning on average $5 less per hour than nonsmokers.

Prochaska’s research was supported by a Community Academic Research Award (CARA) from the California taxpayer-supported Tobacco Related Disease Research Program administered by the University of California. This award mechanism supports collaborative partnerships between an academic investigator and community-based organizations to perform scientific research into tobacco-related issues that are important to Californians.

Prochaska and Amy Rogers, a clinician with years of experience treating smoking among job seekers in Marin County, sought grant funding to do research together in this area. Working with two local employment development departments in the San Francisco Bay Area, their team tracked 131 smokers and 120 nonsmokers seeking employment over the course of a year. At 12 months, smokers were less likely to be employed: only 27 percent of smokers had found a job, compared to 56 percent of nonsmokers.

But getting a job relies on many factors, and smoking isn’t the only thing that can affect job seekers’ success.

“The smokers compared to the nonsmokers in our study tended to be men, younger, with less education, poorer overall health, more suburban, often with less stable housing and unreliable transportation,” explained Prochaska.

To account for these factors, Drs. Michael Baiocchi and Eric Daza on the research team ran sophisticated data analyses to equate the groups on key criteria, including time out of work, age, education, race/ethnicity, health status, access to transportation, criminal history, prior alcohol/drug treatment, sex and housing stability. Further, they trimmed the data to remove extreme cases such as smokers who were so different on these variables from nonsmokers that there was no overlap in the distributions.

“You can think of this as a mathematically precise way of ‘comparing apples to apples.’ The groups we compared weren't smokers in general versus nonsmokers in general” said Baiocchi, an assistant professor of medicine at Stanford University. “We compared smokers who looked nearly identical to nonsmokers.”

The researchers found that the magnitude of effect in job seeking success by smoking status was sizable and significant both in the adjusted and raw analyses with absolute differences of 24 percent to 30 percent in re-employment respectively.

Why don’t smokers get hired?

“Employers may not hire smokers due to concerns about absenteeism or higher healthcare costs,” said Prochaska.

Employers have become increasingly aware that employees who smoke come with additional costs. For private employers in the U.S., an employee who smokes can cost an additional $5,816 per year. It is legal in many U.S. states for employers to forbid tobacco use by employees, and urine testing can be required for job applicants.

From the job seeker side, addiction-associated behavior may also play a role in the difficulty in finding new jobs. Prochaska’s team looked at discretionary spending priorities among the unemployed smokers. Worryingly, tobacco was a higher priority on average than all other options, including food, transportation, cell phone bills, clothing, grooming and medical appointments.

For job seekers, the implications are clear: quitting smoking – or not starting the habit in the first place – can significantly improve your chances of finding a new job. But quitting smoking is difficult, and job seekers may not see the connection between smoking and job hunting.

“This research suggests that employment development departments could be an effective intervention point for helping people stop smoking,” said Prochaska.

Is it a viable strategy? Prochaska’s team is currently looking into this question with a new TRDRP-funded study. This time, in a randomized controlled trial, they are testing whether a smoking intervention increases the chances of finding a job among unemployed smokers.

This research was supported by the Tobacco-Related Disease Research Program, by the National Heart Lung and Blood Institute, by the Agency for Healthcare Research and Quality, and by the Stanford Department of Medicine.