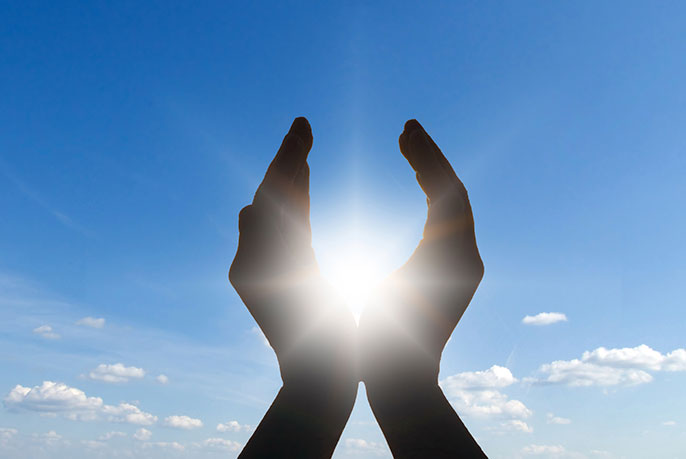 By combining designer quantum dot light-emitters with spectrally matched photonic mirrors, a team of scientists with Berkeley Lab and the University of Illinois created solar cells that collect  blue photons at 30 times the concentration of conventional solar cells, the highest luminescent concentration factor ever recorded. This breakthrough paves the way for the future development of low-cost solar cells that efficiently utilize the high-energy part of the solar spectrum.

“We’ve achieved a luminescent concentration ratio greater than 30 with an optical efficiency of 82-percent for blue photons,” says Berkeley Lab director Paul Alivisatos, who is also the Samsung Distinguished Professor of Nanoscience and Nanotechnology at the University of California Berkeley, and director of theKavli Energy Nanoscience Institute (ENSI), was the co-leader of this research. “To the best of our knowledge, this is the highest luminescent concentration factor in literature to date.”

Alivisatos and Ralph Nuzzo of the University of Illinois are the corresponding authors of a paper in ACS Photonics describing this research entitled “Quantum Dot Luminescent Concentrator Cavity Exhibiting 30-fold Concentration.” Noah Bronstein, a member of Alivisatos’s research group, is one of three lead authors along with Yuan Yao and Lu Xu. Other co-authors are Erin O’Brien, Alexander Powers and Vivian Ferry.

The solar energy industry in the United States is soaring with the number of photovoltaic installations having grown from generating 1.2 gigawatts of electricity in 2008 to generating 20-plus gigawatts today, according to the U.S. Department of Energy (DOE). Still, nearly 70-percent of the electricity generated in this country continues to come from fossil fuels. Low-cost alternatives to today’s photovoltaic solar panels are needed for the immense advantages of solar power to be fully realized. One promising alternative has been luminescent solar concentrators (LSCs).

Unlike conventional solar cells that directly absorb sunlight and convert it into electricity, an LSC absorbs the light on a  plate embedded with highly efficient light-emitters called “lumophores” that then re-emit the absorbed light at longer wavelengths, a process known as the Stokes shift. This re-emitted light is directed to a micro-solar cell for conversion to electricity. Because the plate is much larger than the micro-solar cell, the solar energy hitting the cell is highly concentrated.

With a sufficient concentration factor, only small amounts of expensive III−V photovoltaic materials are needed to collect light from an inexpensive luminescent waveguide. However, the concentration factor and collection efficiency of the molecular dyes that up until now have been used as lumophores are limited by parasitic losses, including non-unity quantum yields of the lumophores, imperfect light trapping within the waveguide, and reabsorption and scattering of propagating photons.

“The CdSe/CdS nanoparticles enabled us to decouple absorption from emission energy and volume, which in turn allowed us to balance absorption and scattering to obtain the optimum nanoparticle,” he says. “Our use of photonic mirrors that are carefully matched to the narrow bandwidth of our quantum dot lumophores allowed us to achieve waveguide efficiency exceeding the limit imposed by total internal reflection.”

In their ACS Photonics paper, the collaborators express confidence that future LSC devices will achieve even higher concentration ratios through improvements to the luminescence quantum yield, waveguide geometry, and photonic mirror design.

The success of this CdSe/CdS nanoparticle-based LSC system led to a partnership between Berkeley Lab, the University of Illinois, Caltech and the National Renewable Energy Lab (NREL) on a new solar concentrator project. At the recent Clean Energy Summit held in Las Vegas, President Obama and Energy Secretary Ernest Moniz announced this partnership will receive a $3 million grant for the development of a micro-optical tandem LCS under MOSAIC, the newest program from DOE’s ARPA-E. MOSAIC stands for Micro-scale Optimized Solar-cell Arrays with Integrated Concentration.

The LCS work reported in this story was carried out through the U.S. Department of Energy’sEnergy Frontier Research Center program and the National Science Foundation.