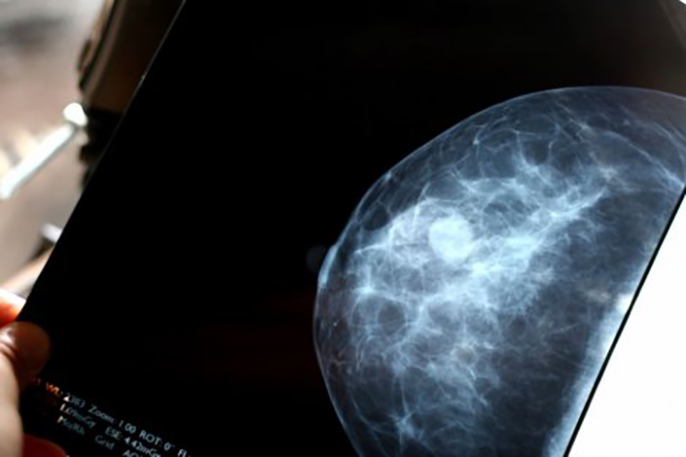 Early-stage breast cancer patients whose tumors carry genetic markers associated with a low risk of disease recurrence may not need to undergo chemotherapy, suggests a new study that employed a test devised by a UC San Francisco researcher.

In the study, reported Aug. 24, in The New England Journal of Medicine, researchers profiled surgically removed tumors from nearly 6,700 patients using a genetic test known as MammaPrint, which predicts the risk of cancer recurrence by measuring the expression of a suite of 70 genes. They found that early-stage breast cancer patients with high “clinical risk” – as determined by conventional measures such as tumor size, the presence of hormone receptors, and metastasis to lymph nodes – but low genetic risk, according to MammaPrint results, had very similar prognoses whether they underwent chemotherapy or not.

After five years, nearly 95 percent of patients with high clinical risk, but low genetic risk, who did not receive chemotherapy were still alive and without metastatic disease distant from the site of their primary cancer, a survival rate only 1.5 percent lower than in women with the same characteristics who did receive chemotherapy. The patients had undergone other standard treatments in addition to surgery, including hormone therapy and radiation treatment.

The results suggest that MammaPrint testing could be used to help clinicians and patients evaluate their treatment course – which may include skipping chemotherapy.

“For the first time, a prospective, randomized trial shows that the active biology of breast cancer in an individual, as assessed by the MammaPrint test, can assist in making a well-informed choice to undergo chemotherapy treatment or not,” said co-first author Laura van ’t Veer, Ph.D., an inventor of MammaPrint, and director of Applied Genomics at the UCSF Helen Diller Family Comprehensive Cancer Center.

The results come from an international research collaboration called MINDACT (“Microarray In Node-Negative and 1 to 3 Positive Lymph Node Disease May Avoid Chemotherapy”).

Joining van ’t Veer as equally contributing authors are Fatima Cardoso, M.D., director of the breast unit of the Champalimaud Clinical Center, in Lisbon, Portugal; and Jan Bogaerts, Ph.D., of the European Organization for Research and Treatment of Cancer Headquarters. The team also included Emiel Rutgers, M.D., Ph.D., of the Netherlands Cancer Institute in Amsterdam, and Martine Piccart, M.D., Ph.D., of the Université Libre de Bruxelles, in Belgium.

Breast cancer is the most frequently diagnosed cancer in women worldwide, according to the World Health Organization. In 2015, the American Cancer Society estimated that there were nearly 1.7 million new breast cancer cases internationally in 2012, accounting for 25 percent of all new cancer cases in women.

Gene expression patterns in tumors differ from individual to individual, and MammaPrint, which is produced by Agendia, a company co-founded by van ’t Veer, represents a new way to assess risk of cancer recurrence in women with breast cancer. The test checks for a 70-gene signature that can predict whether cancer will reoccur in early-stage breast cancer patients.

Chemotherapy, though a powerful treatment for breast cancer, is toxic, and causes serious side effects. In the MINDACT study, 23 percent of nearly 6,700 breast cancer patients across Europe were determined to to be candidates for chemotherapy due to their high clinical risk, but they had low-risk tumors according to MammaPrint. These patients were randomly assigned into two groups: one received chemotherapy and the other did not.

For the most common type of breast cancer, hormone receptor positive (HR+)/ human epidermal growth factor receptor 2 negative (HER2–)/lymph node negative (LN0) disease, 75 percent of patients were found to have low genetic risk via MammaPrint. Of that group, nearly 98 percent of those not receiving chemotherapy had a five-year survival rate without a distant metastasis.

Analysis of the tumor samples for the trial was performed by Agendia at no charge. As a co-founder, part-time employee, member of the management board and stockholder in Agendia NV, van ’t Veer has disclosed that she has received “personal fees and other support from Agendia NV outside the submitted work.” The Netherlands Cancer Institute holds a patent related to MammaPrint, which is licensed to Agendia NV; UCSF has no interest in the MammaPrint patent.