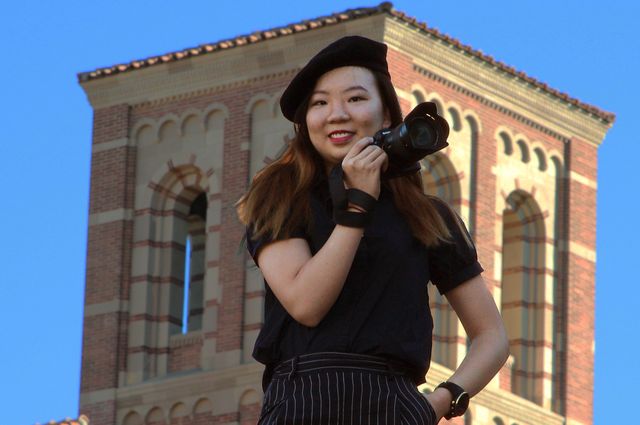 In the last five years, Lisa Ranran Hu has made more than 10 short films even though she has never owned a single book about filmmaking.

When Lisa Ranran Hu set out to make a movie during her senior year of high school, she thought it would simply be shown at her school’s annual film festival and perhaps, if she was lucky, earn an award.

Instead, her 75-minute film, “Escape,” which had an unexpected and circuitous route to its onscreen debut, garnered unexpected attention in her home country of China, spurred public discussion, challenged the status quo in terms of her country’s attitude toward LGBT topics and earned the self-taught filmmaker some impressive recognition.

The latest honor for Hu came Nov. 5. The 19-year-old UCLA sophomore, who is majoring in psychology and minoring in film, was selected from hundreds of nominees to become part of Teen Vogue’s “21 Under 21” Class of 2018.

The honorees, wrote Teen Vogue, are activists, artists and revolutionaries who are making waves in their industry or passion of choice.

“They told me it was actually Emma Watson who nominated me, and that surprised me a lot,” said Hu, adding that she has no idea how the actress who played Hermione Granger in the Harry Potter films heard about her.

Hu is no stranger to honors like this. She was named to Time magazine’s “List of 30 Most Influential Teens of 2017” to Forbes “30 Under 30 Asia” earlier this year.

Hu and the other honorees will be involved with a Teen Vogue Summit, which also features appearances by Serena Williams, actor Terry Crews, actress Storm Reid and Olympic fencer Ibtihaj Muhammad, that will be held Nov. 30 and Dec. 1 in Los Angeles.

Hu started toying with filmmaking when she was about 13. She had been tasked with writing a short script based on a Chinese historical event for a class assignment and decided to take it a step further by producing the script into a 12-minute short. It took her two months. Later, she joined her high school’s film club and made a couple of short films for fun.

Since then, Hu, who loves the work of award-winning Taiwanese film director, Ang Lee, has learned most of her skills and developed her style by watching movies and reading short articles posted to WeChat, a popular social media site she grew up with in China. During the past five years she has made more than 10 short films — without having ever owned a single film book — mainly focused on social issues.

Hu’s film, which took one month to write and five months to film and edit, follows the story of a transgender teenager as she comes to gain acceptance and confidence in her emerging female identity.

“I knew I wanted to present a story about someone who was struggling with his identity and that he should be himself. At the time, self-acceptance was the general theme,” she said. “We were also interested in exploring a topic related to the LGBT community, and we decided to try.”

This message, said Hu, is not exclusive to transgender people. “It can be anyone.”

Hu researched the topic by going to Guangzhou Transgender Center’s online discussion site and interviewing people who are transgender.

“Escape”, which Hu produced with no budget, was shot at her high school and in her home using her Canon 5D Mark II camera. Nearly 40 of her schoolmates volunteered their time and talent to the project.

Although she had originally produced “Escape” to submit to her school’s film festival, it was never shown. The school implemented a new rule that restricted seniors from participating, so that they could focus their attention solely on preparing for their university entrance exams.

“There were a lot of twists,” Hu said.

Hu tried to have “Escape” shown at her school at a later date, but that was met with resistance. A representative from the Communist Youth League asked Hu for a copy of “Escape” before they would make a decision about reserving a room for her.

“They wanted to check to see if there was any inappropriate content,” Hu said. “I was then informed that the transgender topic was too avant-garde and not appropriate to screen in a high school.”

Instead, one of the film’s actors arranged for the film to premier at the Bejing LGBT Center and invited a reporter from the Beijing Youth Newspaper to attend. The next day a story was published and this opened up a flurry of discussion and debate.

Articles began popping up in other Chinese newspapers and websites.

“It spread quickly,” she said.

These articles focused on two distinct areas. One was the subject of visibility and acceptance of those who are transgender. The other highlighted educational access and school funding in China, Hu said.

“We’re only seniors in high school and we’ve made a film, and there are youth in the countryside who can’t even pay their tuition,” Hu said.

In August 2017, the New York Times ran a story noting that subsequent attempts to screen “Escape” in China, a country “where gender identity remains a sensitive topic,” wrote reporter Tang Yucheng, were met with resistance.

“Chinese law allows individuals to change their gender on personal identification cards, but only if they have undergone sex reassignment surgery, and this is illegal for people under 20,” Yucheng wrote. “In June, the China Netcasting Services Association, a government-affiliated industry group, issued regulations to remove online videos that violate socialist values, including those ‘demonstrating ‘abnormal’ sex relations or acts.’ These did not mention transgender people, but included homosexuality, even though it was decriminalized in China in 1997 and removed from the official list of mental disorders in 2001.”

Over the past two summers, Hu has been working on a documentary series that follows the personal and academic lives of students at a Buddhist primary school in Tibet. She is also a video production assistant at UCLA Studio 22, an on-campus multimedia training and resource center for students; director of video production for the Chinese Students and Scholars Association at UCLA; and a cinematography specialist for the Film and Photography Society at UCLA.

After graduation Hu said she’d like to work in the film industry, ideally in the United States, but may take some time away from her school once she earns her undergraduate degree.

“I feel that to be a director specifically, it requires technical skills, but more importantly it requires great life experience…,” she said. “I want to explore life more before I go to grad school to learn the technical stuff.”