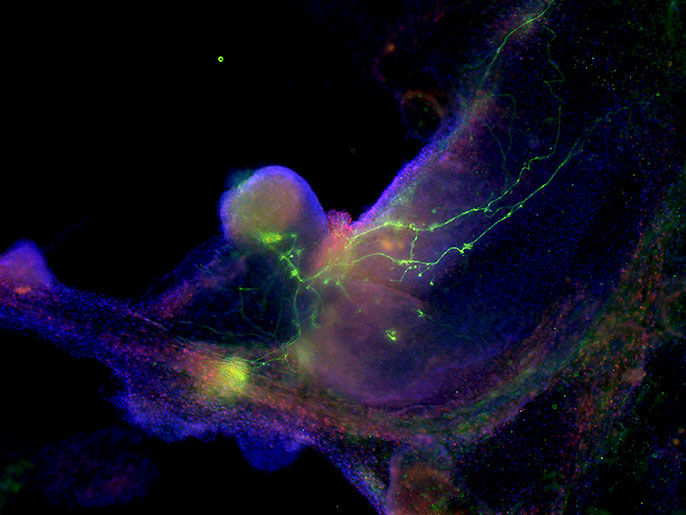 A new stem-cell discovery might one day lead to a more streamlined process for obtaining stem cells, which in turn could be used in the development of replacement tissue for failing body parts, according to UC San Francisco scientists who reported the findings in the current edition of Cell.

The work builds on a strategy that involves reprogramming adult cells back to an embryonic state in which they again have the potential to become any type of cell.

The efficiency of this process may soon increase thanks to the scientists’ identification of biochemical pathways that can inhibit the necessary reprogramming of gene activity in adult human cells. Removing these barriers increased the efficiency of stem-cell production, the researchers found.

“Our new work has important implications for both regenerative medicine and cancer research,” said Miguel Ramalho-Santos, Ph.D., associate professor of obstetrics, gynecology and reproductive sciences and a member of the Eli and Edythe Broad Center of Regeneration Medicine and Stem Cell Research at UCSF, who led the research, funded in part by a prestigious NIH Director’s New Innovator Award.

The earlier discovery that it was possible to take specialized adult cells and reverse the developmental clock to strip the mature cells of their distinctive identities and characteristics — and to make them immortal, reprogrammable cells that theoretically can be used to replace any tissue type — led to a share of the Nobel Prize in Physiology or Medicine being awarded to UCSF, Gladstone Institutes and Kyoto University researcher Shinya Yamanaka, M.D., in 2012.

Turning back the clock on cellular maturation

These induced pluripotent stem (iPS) cells are regarded as an alternative experimental approach to ongoing efforts to develop tissue from stem cells obtained from early-stage human embryos. However, despite the promise of iPS cells and the excitement surrounding iPS research, the percentage of adult cells successfully converted to iPS cells is typically low, and the resultant cells often retain traces of their earlier lives as specialized cells.

Researchers generate stem cells by forcing the activation within adult cells of pluripotency-inducing genes — starting with the so-called “Yamanaka factors” — a process that turns back the clock on cellular maturation.

Yet, as Ramalho-Santos notes, “From the time of the discovery of iPS cells, it was appreciated that the specialized cells from which they are derived are not a blank slate. They express their own genes that may resist or counter reprogramming.”

But the nature of what exactly was getting in the way of reprogramming remained poorly understood. “Now, by genetically removing multiple barriers to reprogramming, we have found that the efficiency of generation of iPS cells can be greatly increased,” he said. The discovery will contribute to accelerating the safe and efficient use of iPS cells and other reprogrammed cells, according to Ramalho-Santos.

The researchers found not merely isolated genes acting as barriers, but rather sets of genes acting in concert through different mechanisms to throw up roadblocks to reprogramming. “At practically every level of a cell's functions there are genes that act in an intricately coordinated fashion to antagonize reprogramming,” Ramalho-Santos said. These mechanisms are likely to help adult cells maintain their identities and functional roles.

“Much like the Red Queen running constantly to remain in the same place in Lewis Carroll's ‘Through the Looking-Glass,’ adult cells appear to put a lot of effort into remaining in the same state,” he said.

To uncover this previously unidentified bustling biochemical matrix of inhibitory gene activity, the scientists had to simultaneously master a few different technical feats in the lab. They combined cutting-edge genetic, cellular and bioinformatics technologies to comprehensively identify genes that act as barriers to the generation of human iPS cells, and probed how these novel barriers work.

Apart from maintaining the integrity of our adult tissues, the barrier genes probably serve important roles in other diseases — including in the prevention of certain cancers, according to Ramalho-Santos.

The work is a result of teamwork between scientists from not only Ramalho-Santos’ lab, but also from the UCSF labs headed by Jun Song, Ph.D., assistant professor of epidemiology and biostatistics, and Michael McManus, Ph.D., associate professor of microbiology and immunology.

The study was funded by the California Institute for Regenerative Medicine, the National Institutes of Health, the UCSF Program for Breakthrough Biomedical Research, the Netherlands Organization for Scientific Research and the Sontag Foundation.