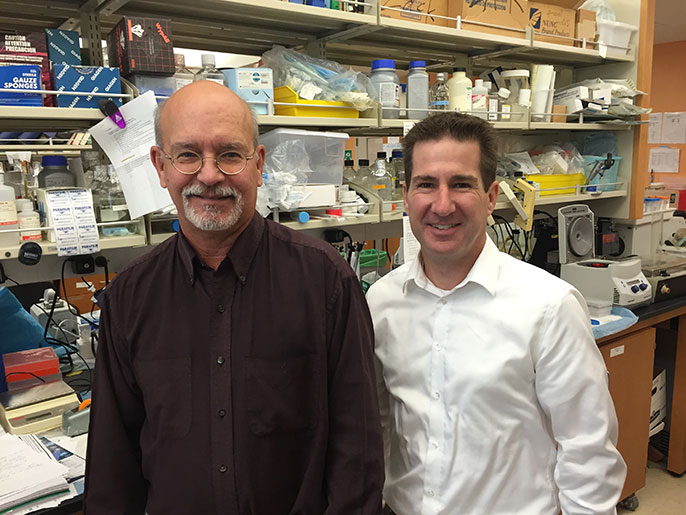 The scientists, led by Jerome Zack (left) and Scott Kitchen, found that the technique decreased HIV levels in mice by 80 to 95 percent.

Scientists at the UCLA Eli and Edythe Broad Center of Regenerative Medicine and Stem Cell Research are one step closer to engineering a tool that could one day arm the body’s immune system to fight HIV — and win. The new technique harnesses the regenerative capacity of stem cells to generate an immune response to the virus.

The findings were published today (June 30) in the journal Molecular Therapy.

“We hope this approach could one day allow HIV-positive individuals to reduce or even stop their current HIV drug regimen and clear the virus from the body altogether,” said Scott Kitchen, the study’s lead author and a member of the Broad Stem Cell Research Center. “We also think this approach could possibly be extended to other diseases.” Kitchen also is a member of the UCLA AIDS Institute and an associate professor of medicine in the division of hematology and oncology at the David Geffen School of Medicine at UCLA.

Kitchen and his colleagues were the first to report the use of an engineered molecule called a chimeric antigen receptor, or CAR, in blood-forming stem cells. Blood-forming stem cells are capable of turning into any type of blood cell, including T cells, the white blood cells that are central to the immune system. In a healthy immune system, T cells can usually rid the body of viral or bacterial infection. But HIV is too strong and mutates too rapidly for T cells to fight against the virus.

From stem cell to T cell

The researchers inserted a gene for a CAR into blood-forming stem cells in the lab. The CAR, which is a two-part receptor that recognizes an antigen, was engineered to be carried by T cells and direct them to locate and kill HIV-infected cells. The CAR-modified blood stem cells were then transplanted into HIV-infected mice that had been genetically engineered with human immune systems. (As a result, HIV infection causes disease similar to that in humans.)

The researchers found that the CAR-carrying blood stem cells successfully turned into functional T cells that could kill HIV-infected cells in the mice. The result was a decrease in HIV levels of 80 to 95 percent.

The findings strongly suggest that stem cell-based gene therapy with a CAR may be a feasible and effective treatment for chronic HIV infection in humans.

The world’s leading infectious killer, HIV has caused approximately 40 million deaths worldwide since it was first identified in the early 1980s. Once HIV invades the body, it targets the very immune cells that are working against it, using the machinery of T cells to make copies of itself to spread through the body. This kills the T cells and weakens the immune system so much that the body can’t fight even a simple infection. Certain drugs help suppress the virus, but since the human immune system can’t clear the virus from the body, people with HIV have the virus for life.

“Despite increased scientific understanding of HIV and better prevention and treatment with available drugs, a majority of the 35 million people living with HIV, and millions more at risk of infection, do not have adequate access to prevention and treatment, and there is still no practical cure,” said Jerome Zack, professor of medicine and of microbiology, immunology and molecular genetics in the UCLA David Geffen School of Medicine and a co-author of the study. “With the CAR approach, we aim to change that.” Zack is co-director of the UCLA AIDS Institute and is affiliated with UCLA’s Jonsson Comprehensive Cancer Center and a member of the Broad Stem Cell Research Center.

Previous studies by Kitchen and Zack demonstrated similar results with other T cell receptors, although it is known that HIV could mutate away from those receptors. Another shortcoming of T cell receptors used in previous clinical studies was that they could not be universally used in patients, because they would have to be individually matched to patients — in the same way organs are matched to transplant recipients.

Kitchen said the CAR approach is more flexible and potentially more effective because it could theoretically be employed in anyone. If further testing continues to show promise, the researchers hope a treatment based on their approach could be brought to human clinical trials within five to 10 years.

The study’s first author was Anjie Zhen, a postdoctoral fellow at UCLA in the Division of Hematology/Oncology, the UCLA AIDS Institute and the Broad Stem Cell Research Center.

The chimeric antigen receptor method is used in preclinical tests only and has not been tested in humans or approved by the Food and Drug Administration for use in humans.