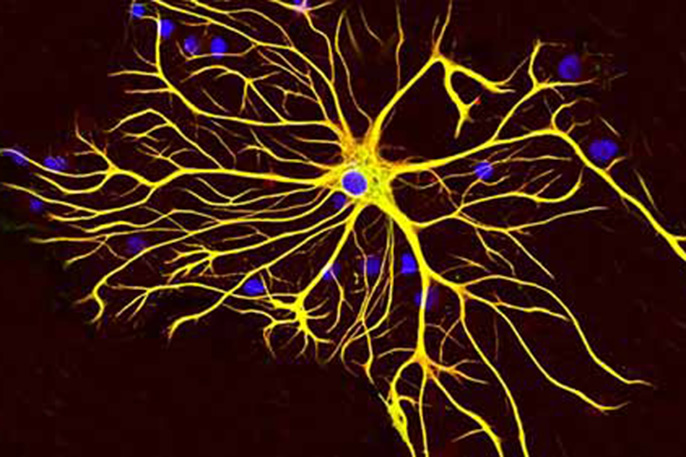 A human astrocyte grown in tissue culture. The blue stain indicates DNA inside the astrocyte’s nucleus and in other nearby cells.

The funding was part of $44.5 million awarded by the California Institute for Regenerative Medicine to address fatal conditions such as severe combined immunodeficiency and Tay-Sachs and Sandhoff disease, along with diseases ranging from cancer to amyotrophic lateral sclerosis, or ALS.

William Murphy, professor of dermatology and internal medicine, and a specialist in cancer immunology, is leading a team that plans to target tumor cancer stem cells in aggressive malignancies such as breast cancer, pancreatic cancer and sarcomas. Working with colleague Robert Canter, associate professor of surgery, Murphy will use an immunotherapeutic cell product derived from placental stem cells to eradicate cancer stem cell populations in patients.

Joseph Anderson, an assistant adjunct professor of internal medicine and a stem cell researcher, is working to develop a therapy that would halt the progression of Tay-Sachs (and its more severe form, Sandhoff) disease, which is a rare, inherited and incurable disease that affects an infant’s central nervous system.

UCLA received more than $7.6 million for a grant led by Lili Yang to genetically engineer immune cells to fight cancer. Yang, a member of the UCLA Broad Stem Cell Research Center, hopes to engineer the body’s immune system to give it the ability to attack and kill cancerous cells, while leaving healthy tissues unharmed. By genetically engineering blood-forming stem cells, Yang will generate a special kind of white blood cell that can both directly kill tumor cells and activate other immune cells to eradicate cancerous tumors.

Building upon past research, scientists will conduct pre-clinical studies in advance of proposed human trials that would transplant neuronal stem cells derived from an established and well-understood human embryonic stem cell line into ALS patients. The neuronal stem cells would develop as astrocytes, providing new support for ailing motor neurons, thus extending their lives and function.

UC San Francisco researchers received $4.3 million to complete the preclinical work needed to develop a therapy for children with severe combined immunodeficiency (SCID) caused by a defect in the ART gene. Children born with SCID have severely weakened immune systems, making it hard for them to fight infections. The standard treatment is a bone marrow transplant, but for children with the ART gene defect, who don’t have a matched sibling bone marrow donor, this can put them at increased risk for potentially deadly complications. The UCSF team hopes to use the patient’s own blood-forming stem cells, genetically modified to correct for the ART defect, to treat the children.

Overall, CIRM’s governing board has awarded almost $2 billion in stem cell grants, with nearly half of the total going to the University of California or UC-affiliated institutions.