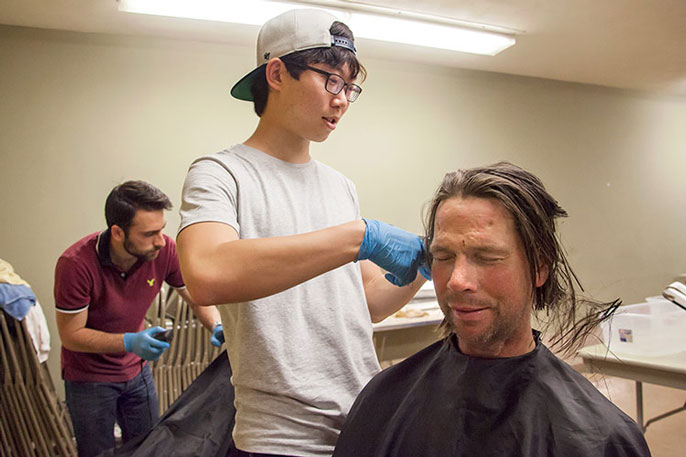 A foot washing. A haircut. Empathy. Legal advice. Eyeglasses or dental work. Medical attention for a wound, a case of scabies or even diabetes.

All these needs bring people living on the margins to the Suitcase Clinic — a free service that UC Berkeley students have provided near campus for more than a quarter-century.

On a recent Tuesday evening, several dozen people turned up at the First Presbyterian Church of Berkeley, on Dana Street, for the first “general clinic” of the summer (the Suitcase Clinic also holds specialized clinics for women, youth and LGBTQI people).

Among them was Rickey Collins, who is currently homeless, though he has a driving job in Hayward. Collins enjoys meeting up with friends from the homeless community, he says, when he visits the Suitcase  Clinic. “Everybody knows about this place,” he says.

The Suitcase Clinic was started by students in the UC Berkeley-UCSF Joint Medical Program (JMP), who, along with campus undergrads, began visiting local parks in 1990. Initially they arrived on foot, carrying suitcases stocked with supplies to help meet the basic needs of people living on the margins; later the students began making their rounds by van.

The program has long since moved indoors, into local churches and shelters, offering its general clinic, open to all, as well as the specialized clinics for women, youth and LGBTQI people.

Encountering the homeless on the streets, “it’s easy to look the other way,” says Dan Morberg, a second-year JMP student who coordinates the general clinic. But working closely with marginalized clients and learning their backstories changes that.

On clinic nights, each client is paired with an undergraduate “caseworker” who is currently taking, or has completed, a student-facilitated service-learning course, affiliated with the UC Berkeley School of Public Health, on issues related to homelessness. As the client accesses medical and non-medical services during the visit, the undergrad’s role is to listen empathically and connect the individual to appropriate services.

“In that human interaction, barriers are broken down,” and students (who typically have no personal experience with homelessness) gain a deeper understanding of what it’s like to survive on the streets, says Suitcase Clinic adviser Christopher “Toff” Peabody. An emergency-room physician at San Francisco General Hospital, Peabody first participated in the clinic in 1999 as a Berkeley freshman.

"What was once private is now public"

One of his own “biggest epiphanies” as an undergrad was coming to understand homelessness this way: “What was once private is now public” — whether that’s “going to the bathroom, having an argument with a partner or even sleeping.”

And yet there are laws against doing most of these things in public, Peabody stresses, so the homeless are routinely cited and fined — for sleeping in public, for example. Miss your court date and you end up with a bench warrant, and eventually with a stark choice: Go to jail or leave Berkeley. “Our clients face this system where they’re asked to disappear.”

While the program helps meet the urgent needs of homeless people, it has also been a “defining experience” for a cadre of doctors and other professionals committed to serving the underserved and sensitive to what that involves, Peabody says. “I can’t say enough about how the Suitcase Clinic has propelled our careers.”

His own apprenticeship at the clinic transformed his understanding of “non-compliant” patients. If you’re homeless with diabetes, “you don’t have a fridge for insulin,” Peabody realized. If you’re nursing a foot wound, “it’s hard to change your bandage three times a day” as the doctor ordered. “You get to see it from the other side — how big those barriers are.”

The Suitcase Clinic at Berkeley is one of the best-known of the student-led free clinics around the country, and medical residency programs view its graduates as dedicated and experienced in ways that prepare them to be good physicians, says Peabody.

As to solutions to homelessness (a subject that clinic volunteers have grappled with since the program’s early days), he sees supportive-housing — combining housing for the homeless with onsite case management and services — as “the model that seems to be the way forward.”

If, for example, a homeless person uses emergency services 10 to 20 times a year, as many do, “that far exceeds the cost of housing them. It’s a very expensive type of care.”

New generations of volunteers may come up with even better models, Peabody believes. Combine all you learn at the Suitcase Clinic with a UC Berkeley education and you have the experience “to one day be part of the permanent solution for homelessness.”