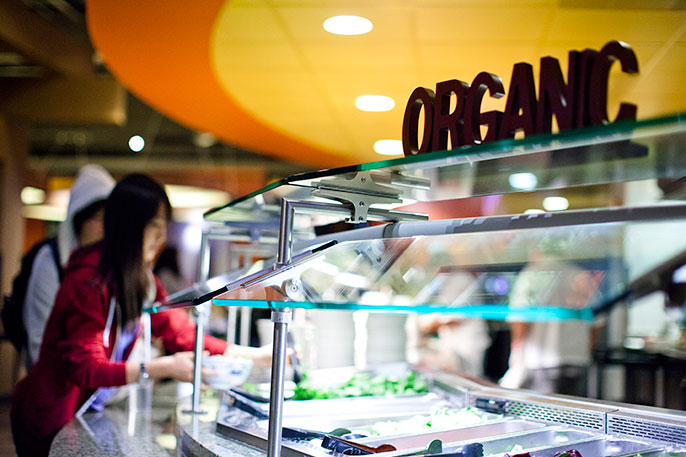 Cal Dining is one of the organizations donating surplus food to Feeding Forward.

For fourth-year Berkeley student Chloe Tsang, it isn’t necessary to take an international flight to encounter the”global poverty” she has studied in class. Hunger, should we choose to see it, is “at our back door,” on the streets of Berkeley — a reality not to ignore or lament, she believes, but to address with head and heart.

As we talk, she checks a website called “Feeding Forward,” on her laptop, and discovers that someone nearby is offering to donate 14 pounds of bagels, 12 pounds of cooked polenta, 110 pounds of hot dogs and 26 pounds of grilled chicken breast. And she deftly identifies a local soup kitchen that can make good use of the food.

An environmental biology major and global poverty and practice minor, Tsang helped found the food-recovery platform, which connects organizations that have surplus perishable food with social agencies that feed the hungry. More than 400 donor groups — including Cal Dining, Cal Catering and scores of Bay Area restaurants — are currently registered on the site, along with some 100 recipient nonprofits. More than a half-million pounds of food have been recovered since the platform’s launch spring 2013.

“I didn’t expect it to be this big, but now that I see it growing, it’s something I can’t let go of,” says Tsang.

Digital technology was not always in the mix. In the fall of 2010, Tsang and classmate Komal Ahmad recruited a handful of students eager to address the inequitable distribution of plentiful food. Together they secured a “Big Ideas” grant to launch “Bare Abundance,” a DeCal class on hunger and nutrition with an outreach component, assisted by the campus’s Public Service Center, to take nutrition education into a West Oakland elementary school.

Aided by the federal Bill Emerson Good Samaritan Act, which frees food donors from the fear of liability suits, they also began ferrying surplus perishables from Cal Dining to nearby homeless shelters and soup kitchens. Like-minded peers on the East Coast, as it happened, were launching similar projects, and together they created the nationwide, student-led Food Recovery Network.

Coordinating volunteers’ schedules was complex and time-consuming, however – and after year two Bare Abundance determined that its model was not sustainable; it was time to leverage technology. A recent Berkeley computer-science graduate rose to the occasion, designing a software program that allows donors to easily post surpluses available for pickup, and helps match those offers with recipients and volunteer drivers. Its launch, under the Feeding Forward brand, catapulted food redistribution to a whole new level at Berkeley.

Tsang grew up in the San Francisco suburb of Millbrae, close to grandparents who emigrated from Hong Kong in the 1940s, and whose stories of scarcity and hunger under the Japanese occupation influenced the family culture around food.”We couldn’t leave a grain of rice in our bowl,” she says.”We had to finish it.”

In contrast to her grandparents’ struggles, attending UC Berkeley (as her older brother did before her) seemed to Tsang “an immense privilege,” one that comes with a moral obligation to address the needs of the far less-privileged close at hand.

Coursework on global poverty “helped solidify my passions and explain some of the structural issues involved,” she says. And the food-recovery project put theories intro practice, elegantly marrying her interests in natural resources, environmental justice and food justice — her twin desires to address hunger and reduce food waste.

Tsang is now doing research, with a faculty member in public health, for a senior thesis on nutrition and oral health in Nepal and India, and plans to attend dental school after graduating in May.

Before then she hopes to find a volunteer software developer to build out and further streamline Feeding Forward. It should be, she says, “a mobile app accessible to anyone on this planet.”