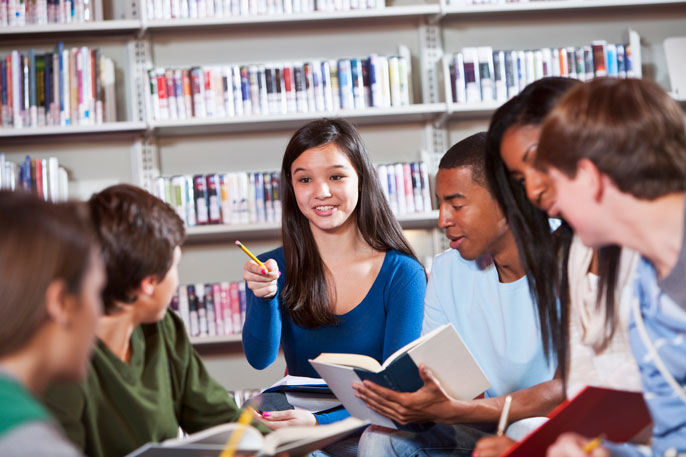 The study found that students in diverse schools reported more tolerance and less prejudice toward students of other ethnicities.

Middle school students from a range of racial and ethnic backgrounds feel safer, less lonely and less bullied if they attend schools that are more diverse, UCLA researchers report today in the journal Child Development.

The study also found that students in diverse schools — those with multiple ethnic groups of relatively equal size — reported more tolerance and less prejudice toward students of other ethnicities and believe teachers treated all students more fairly and equally.

Jaana Juvonen, a UCLA professor of psychology and the research’s lead author, said the study is the first to show such a wide range of personal and social benefits for students of all races and ethnicities from attending ethnically diverse schools.

“When ethnic groups are of relatively equal size, there may be more of a balance of power,” said Juvonen, who has conducted research on school bullying and bullies for more than 20 years. “One or more large ethnic groups will be less likely to exert their influence over one or more small ethnic groups.”

The researchers studied more than 4,300 sixth-grade students in 26 urban middle schools in Southern and Northern California with varying degrees of ethnic diversity. Nearly all of the students in the study were from middle-income and working-class families, and they primarily came from four ethnic groups: African American, Latino, Asian American and white.

Researchers asked the students to rate, on a five-point scale, how safe or unsafe they felt, whether they were bullied or lonely at school, how close they felt to students of different ethnic groups and whether they felt that their teachers treated all students fairly.

“Bullying likely occurs in nearly every school, and many students are concerned about their safety,” Juvonen said. “But our analysis shows students feel safer in ethnically diverse classrooms and schools.”

While demographics change, diversity is on the decline

The study’s co-authors are Sandra Graham, a UCLA distinguished professor of education, and Kara Kogachi, a UCLA graduate student in education. In the paper, they write that U.S. public schools are becoming less ethnically diverse even as, for the first time, more than half the nation’s students are members of ethnic minority groups.

Previous research has shown that school segregation breeds social inequality and causes students to be less accepting of people who differ from them, a finding supported by the new UCLA study.

The study also found that when students attended classes that were significantly less diverse than their school overall, the benefits of diversity disappeared.

“School diversity by itself is only half of the story,” Graham said. “To reap the social benefits of ethnic diversity, instruction needs to be organized so that students’ classes reflect the overall diversity of their school.”

Research has shown that students who have positive social experiences at school perform better academically, Graham said, adding that diversity enhances learning because divergent points of view challenge students’ own beliefs. She encourages schools to add or strengthen opportunities for students from different racial groups to interact with one another.

“It is in everybody’s interest for K-12 schools and classrooms to be more racially diverse,” she said.