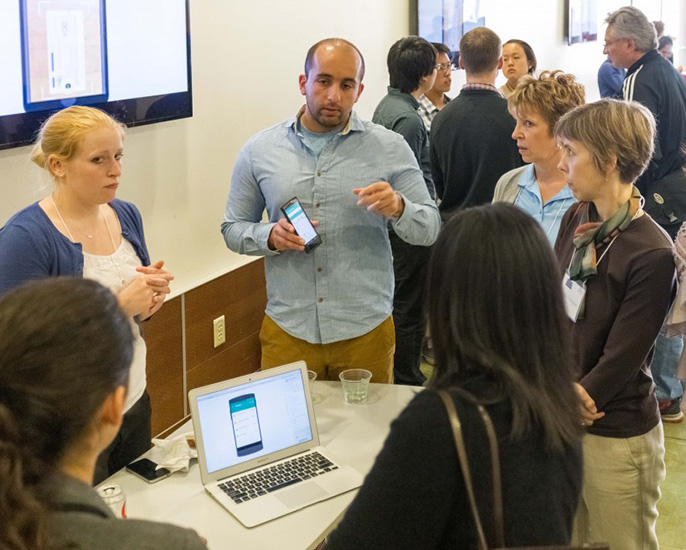 Members of Snapily discuss their app at the CITRIS Mobile App Challenge at UC Berkeley.

UC Davis
ProFacts (Alexander Godbout, Tara Parker-Essig, Vidush Vishwanath, Dominic Yang)
This app informs users about what proteins are in the foods they eat, and which pose the greatest risks to their health.

With support from the University of California Global Food Initiative, this year’s challenge added a new dimension: finding ways to nutritiously and sustainably feed people. Student teams from UC Berkeley, UC Davis and UC Merced answered the call, developing apps to make it easier to shop for groceries and choose healthier food.

A total of 50 teams applied for the three challenges, with 21 teams making it to the finals held throughout May. Teams competed in categories for education, health, civic tech/smart communities and energy/climate/environment, with several food-related projects, including apps for smart gardening, mobile grocery shopping and dining with gluten sensitivity.

“The Mobile App Challenge offers an opportunity for students to pitch their big ideas,” said Brandie Nonnecke, CITRIS research and development manager. “I’m amazed at how innovative the students are — all of the teams are interdisciplinary and all of their apps have a social impact.”

With the U.S. Department of Agriculture estimating that 13.5 million low-income Americans live in food deserts, “not everyone has access to affordable food,” said information school student Irina Lozhkina of Snapily.

Snapily is aimed at low-income, at-risk Oakland residents who lack access to healthy food near their homes. In just a few easy steps, a user can shop online at a grocery store, pay with food stamps or a voucher from the federal Women, Infants and Children (WIC) program, and have the food delivered to a convenient pickup location. With more than 4 million California residents on food stamps and 1 million receiving WIC benefits, this app addresses a need shared by a significant section of the population.

The app is a prototype now, but the team hopes to develop Snapily further and build partnerships with the potential for making it available to the public.

An app designed to keep people from having to eat alone won UC Berkeley’s runner-up prize. The app provides an on-demand social scheduling platform, connecting friends and colleagues nearby for shared meals and conversations.

“The exposure has been amazing,” said systems engineering doctoral student Fadi Kfoury of WeEat, the team that developed it.

The team hopes to make its app available this summer, initially on Apple’s App Store and later for Android phones.

“We have to be more efficient with how we use land,” said computer science major Jeff Zheng of Seedit. “We can’t be wasteful.”

After meeting someone with celiac disease, UC Davis biomedical engineering student Alexander Godbout and his ProFacts team worked to develop an app to help people with gluten sensitivity and their families, letting them know what proteins are in their food and which of those proteins pose the greatest risks to their health. The team is beta testing the app now and later hopes to make it available to the public.

“I’m glad that the research I’m doing is being applied,” said Godbout, whose team won second place overall in the Mobile App Challenge at UC Davis.

The Burger Burn app, which won fourth place overall in the challenge at UC Davis, helps adults with cognitive disabilities improve their ability to manage their diet. The team of six first-year students — friends who live on the same dorm floor — represent disciplines ranging from biology and biochemistry to computer science and psychology.

“I had no experience making apps,” said Michaela Rohrbough, a wildlife biology major. “I thought that’s what engineers do, not freshmen in college.”

The team learned quickly, developing an app that is simple to use, allowing users to click on pictures of food, select their portion size and receive easy-to-make recipes featuring foods that will fill their nutrition deficits.

The app includes a game to keep users motivated to eat well by tapping less-healthy choices and “burning” them. Next steps include animating the game and adding more recipes and information about nutrition and portion sizes. The team hopes to finish making the app market-presentable over this summer.

“We tend to have a black-and-white view of what’s healthy,” said Radhika Iyer, a biology major. “In talking with nutrition experts, it depends a lot on your portion size. It’s not that pizza is so unhealthy, but that you’ve been eating too much of it and you’re missing out on other vitamins.”

CITRIS, the Center for Information Technology Research in the Interest of Society, is one of four UC institutes for science and innovation that support UC research aimed at fostering California’s economic growth and improving the quality of life for its residents.

The Mobile App Challenge began four years ago at UC Merced. The challenge expanded last year to Berkeley and this year to Davis. Organizers hope to extend the challenge next year to the remaining CITRIS campus, UC Santa Cruz.

At UC Merced, the Global Food Initiative-winning team was StockUp, which worked on an app to create grocery lists and share them through Facebook or Google, helping users buy more efficiently while also suggesting healthy recipes.

“It was fun working with other people and finding out what can I make,” said computer science and engineering major Tam Le of StockUp.

“The challenge teaches students the basics of user design and product development. They learn how to make a pitch and a business plan — all of which is part of winning the competition,” said Jefferson Laird, who competed in last year’s Mobile App Challenge as a UC Merced undergraduate and is now a CITRIS UC Merced research assistant.

“The students learn how to build a team and gain valuable experience,” Gillette said.

“The CITRIS Mobile App Challenge was a great showcase of what students are capable of and how they can change the future,” said judge Katherine Harris of Microsoft.