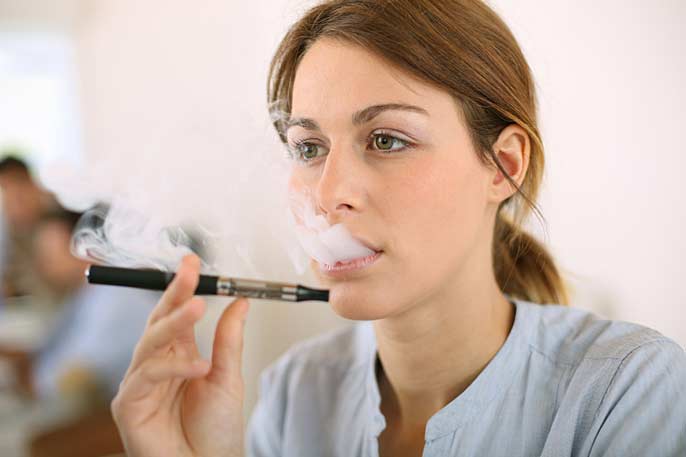 In a major scientific review of research on e-cigarettes, UC San Francisco scientists found that industry claims about the devices are unsupported by the evidence to date, including claims that e-cigarettes help smokers quit.

The review marks the first comprehensive assessment of peer-reviewed published research into the relatively new phenomenon of electronic cigarettes.

The devices, which are rapidly gaining a foothold in popular culture particularly among youth, are marketed as a healthier alternative to tobacco smoking, as an effective tool to stop smoking, and as a way to circumvent smoke-free laws by allowing users to “smoke anywhere.” Often the ads stress that e-cigarettes produce only “harmless water vapor.”

But in their analysis of the marketing, health and behavioral effects of the products, which are unregulated, the UCSF scientists found that e-cigarette use is associated with significantly lower odds of quitting cigarettes. They also found that while the data are still limited, e-cigarette emissions “are not merely ‘harmless water vapor,’ as is frequently claimed, and can be a source of indoor air pollution.”

The long-term biological effects of use are still unknown, the authors said.

In tackling the question of whether e-cigarette use is helping or harming the nation’s tobacco control efforts, the authors analyzed 84 research studies on e-cigarettes and other related scientific materials.

The paper is published May 12, 2014 in the American Heart Association’s journal Circulation.

Despite many unanswered questions about e-cigarette safety, the impact on public health, and whether the products are effective at reducing tobacco smoking, e-cigarettes have swiftly penetrated the marketplace in the United States and abroad in both awareness and use. Sold by the major multinational tobacco and other companies, the devices are aggressively marketed in print, television and the Internet with messages similar to cigarette marketing in the 1950s and 1960s, even in the U.S. and other countries that have long banned advertising for cigarettes and other tobacco products.

Furthermore, most adults and youths who use e-cigarettes are engaging in “dual use” — smoking both e-cigarettes and conventional cigarettes.

While most youth using e-cigarettes are dual users, up to a third of adolescent e-cigarette users have never smoked a conventional cigarette, indicating that some youth are starting use of the addictive drug nicotine with e-cigarettes.

“E-cigarettes do not burn or smolder the way conventional cigarettes do, so they do not emit side-stream smoke; however, bystanders are exposed to aerosol exhaled by the user,” said the authors. Toxins and nicotine have been measured in that aerosol, such as formaldehyde, acetaldehyde, acetic acid and other toxins emitted into the air, though at lower levels compared to conventional cigarette emissions.

Not an aid to quitting

When UCSF scientists pooled the results of five population-based studies of smokers, they found that smokers who used e-cigarettes were about a third less likely to quit smoking than those who did not use e-cigarettes. Whether e-cigarette use prevents attempts to quit or whether people who choose to use e-cigarettes are more highly dependent and therefore have a harder time quitting remains to be determined.

The scientists said their research illustrates the need for product regulation.

“Furthermore, high rates of dual use may result in greater total public health burden and possibly increased individual risk if a smoker maintains an even low-level tobacco cigarette addiction for many years instead of quitting.”

The authors are Rachel Grana, Ph.D., MPH, a postdoctoral fellow at the UCSF Center for Tobacco Control Research and Education (CTCRE); Neal Benowitz, M.D., a UCSF professor of medicine and bioengineering and therapeutic sciences and chief of the division of clinical pharmacology at San Francisco General Hospital and Trauma Center; and Stanton Glantz, Ph.D., professor of medicine at UCSF, director of the CTCRE and the American Legacy Foundation Distinguished Professor in Tobacco Control.

The same authors have previously published general information on e-cigarettes.

The paper is a condensed and updated version of a longer report by Grana, Benowitz and Glantz with the support of the World Health Organization. Additional support came from the University of California Tobacco Related Disease Research Program and the National Cancer Institute and Food and Drug Administration Center for Tobacco Products.

Benowitz is a consultant to several pharmaceutical companies that market smoking cessation medications and has been a paid expert witness in litigation against tobacco companies.