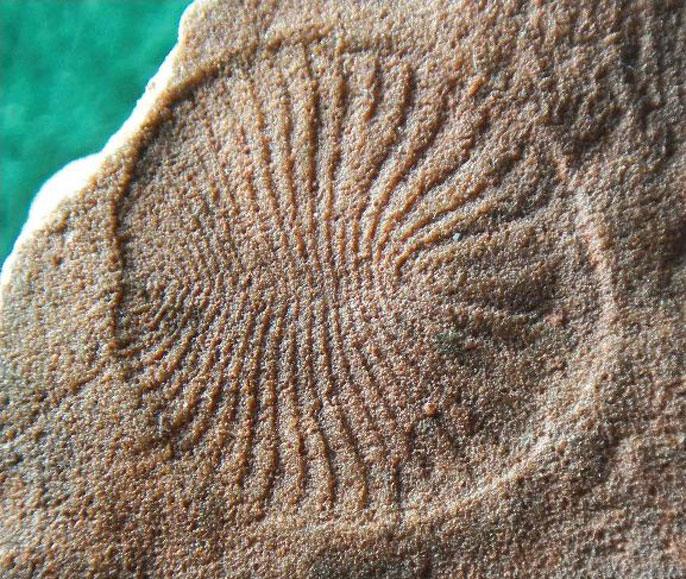 Researchers at UC Riverside are studying the world’s oldest fossil animal, Dickinsonia, to learn more about the evolutionary history of animals.

More than 550 million years ago, the oceans were teeming with flat, soft-bodied creatures that fed on microbes and algae and could grow as big as bathmats. Today, researchers at the University of California, Riverside are studying their fossils to unlock the secrets of early life.

In their latest study, published today in the journal PLOS ONE, Scott Evans, a graduate student in the Department of Earth Sciences, and Mary Droser, a professor of paleontology, both in UC Riverside’s College of Natural and Agricultural Sciences, show that the Ediacaran-era fossil animal Dickinsonia developed in a complex, highly regulated way using a similar genetic toolkit to today’s animals. The study helps place Dickinsonia in the early evolution of animal life, and showcases how the large, mobile sea creature grew and developed.

Dickinsonia was a flat, oval-shaped creature that ranged in size from less than an inch to several feet, and is characterized by a series of raised bands — known as modules — on its surface. These animals are of interest to paleontologists because they are the first to become large and complex, to move around, and form communities, yet little is known about them. For years, scientists have been debating the taxonomic status of Dickinsonia — placing it with fungi, marine worms and jellyfish, to name a few. It is now generally accepted that Dickinsonia was an animal, now extinct.

“Part of this study was trying to put Dickinsonia in context in the development of early life. We wanted to know if these creatures were part of a group of animals that survived or a failed evolutionary experiment. This research adds to our knowledge about these animals and our understanding of life on Earth as an artifact of half a billion years of evolution,” Droser said.

To the Outback, 550 million years ago

Dickinsonia, which lived more than 550 million years ago, were flat, soft-bodied creatures that moved along the sea bed to eat microbes and algae.

To study Dickinsonia, the researchers travelled to South Australia’s desert outback, which was once underwater and is now home to an abundance of Ediacaran fossils. They measured the size, shape and structure of almost 1,000 specimens of Dickinsonia costata, paying attention to the number and size of the modules. The work was done in collaboration with James Gehling of the South Australian Museum in Adelaide, Australia, who is a coauthor on the paper.

The study showed that Dickinsonia’s development, and particularly that of the modules, was complex and systematic to maintain the oval shape of the animal. The accumulation of new modules, by a process called terminal addition, suggests that Dickinsonia developed in a related way to bilaterians, a complex group that display bilateral symmetry, including animals ranging from flies and worms to humans. However, the researchers do not believe Dickinsonia was ancestrally related to bilaterians, since it lacked other features that most bilaterians share, most notably a mouth, gut and anus.

“Although we saw some of the hallmark characteristics of bilateral growth and development, we don’t believe Dickinsonia was a precursor to today’s bilaterians, rather that these are two distinct groups that shared a common set of ancestral genes that are present throughout the animal lineage,” Evans said. “Dickinsonia most likely represents a separate group of animals that is now extinct, but can tell us a lot about the evolutionary history of animals.”

The title of the paper is “Highly regulated growth and development of the Ediacara macrofossil Dickinsonia Costata.” The study was supported by the National Science Foundation and the National Aeronautics and Space Administration Exobiology.