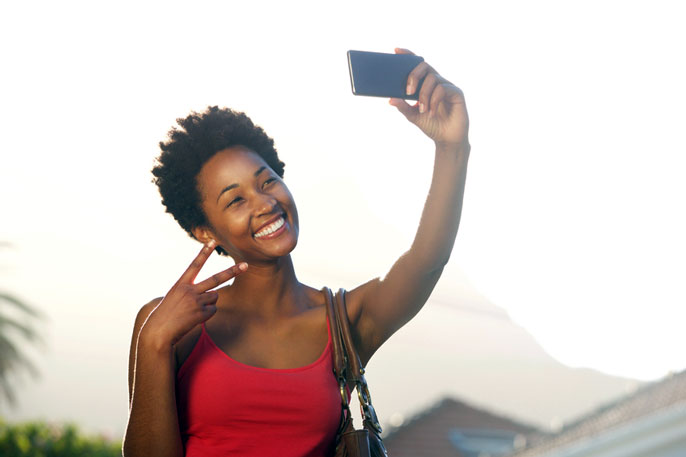 Regularly snapping selfies with your smartphone and sharing photos with your friends can help make you a happier person, according to computer scientists at the University of California, Irvine. In a first-of-its-kind study published just before back-to-school season, the authors found that students can combat the blues with some simple, deliberate actions on their mobile devices.

By conducting exercises via smartphone photo technology and gauging users’ psychological and emotional states, the researchers found that the daily taking and sharing of certain types of images can positively affect people. The results of the study out of UC Irvine’s Donald Bren School of Information & Computer Sciences were published recently in the Psychology of Well-Being.

“Our research showed that practicing exercises that can promote happiness via smartphone picture taking and sharing can lead to increased positive feelings for those who engage in it,” said lead author Yu Chen, a postdoctoral scholar in UC Irvine’s Department of Informatics. “This is particularly useful information for returning college students to be aware of, since they face many sources of pressure.”

These stressors – financial difficulties, being away from home for the first time, feelings of loneliness and isolation, and the rigors of coursework – can negatively impact students’ academic performance and lead to depression.

“The good news is that despite their susceptibility to strain, most college students constantly carry around a mobile device, which can be used for stress relief,” Chen said. “Added to that are many applications and social media tools that make it easy to produce and send images.”

Chen and her colleagues designed and conducted a four-week study involving 41 college students. The subjects – 28 female and 13 male – were instructed to continue their normal day-to-day activities (going to class, doing schoolwork, meeting with friends, etc.) while taking part in the research.

But first each was invited to the informatics lab for an informal interview and to fill out a general questionnaire and consent form. The scientists helped students load a survey app onto their phones to document their moods during the first “control” week of the study. Participants used a different app to take photos and record their emotional states over the following three-week “intervention” phase.

Subjects reported their moods three times a day using the smartphone apps. In evening surveys, they were asked to provide details of any significant events that may have affected their emotions during the course of the day.

The project involved three types of photos to help the researchers determine how smiling, reflecting and giving to others might impact users’ moods. The first was a selfie, to be taken daily while smiling. The second was an image of something that made the photo taker happy. The third was a picture of something the photographer believed would bring happiness to another person (which was then sent to that person). Participants were randomly assigned to take photos of one type.

Gaining an appreciation for 'positive computing'

Researchers collected nearly 2,900 mood measurements during the study and found that subjects in all three groups experienced increased positive moods. Some participants in the selfie group reported becoming more confident and comfortable with their smiling photos over time. The students taking photos of objects that made them happy became more reflective and appreciative. And those who took photos to make others happy became calmer and said that the connection to their friends and family helped relieve stress.

“You see a lot of reports in the media about the negative impacts of technology use, and we look very carefully at these issues here at UC Irvine,” said senior author Gloria Mark, a professor of informatics. “But there have been expanded efforts over the past decade to study what’s become known as ‘positive computing,’ and I think this study shows that sometimes our gadgets can offer benefits to users.”