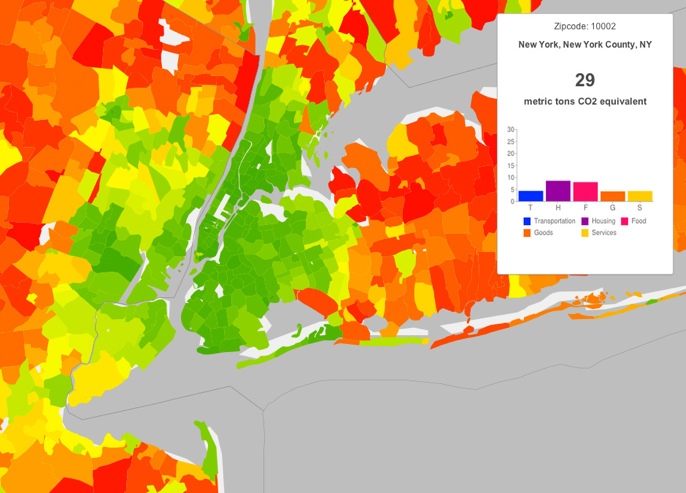 A CoolClimate Map of New York City’s carbon footprint by zipcode tabulation area shows a pattern typical of large metropolitan areas: a small footprint (green) in the urban core but a large footprint (orange and red) in surrounding suburbs.

According to a new study by UC Berkeley researchers, population-dense cities contribute fewer greenhouse-gas emissions per person than other areas of the country, but these cities’ extensive suburbs essentially wipe out the climate benefits.

Dominated by emissions from cars, trucks and other forms of transportation, suburbs account for about 50 percent of all household emissions — largely carbon dioxide — in the United States.

The study, which has been accepted for publication in the journal Environmental Science & Technology (ES&T), uses local census, weather and other data — 37 variables in total — to approximate greenhouse gas emissions resulting from the energy, transportation, food, goods and services consumed by U.S. households, so-called household carbon footprints.

“The goal of the project is to help cities better understand the primary drivers of household carbon footprints in each location,” said Daniel Kammen, Class of 1935 Distinguished Professor of Energy in the Energy and Resources Group and the Goldman School of Public Policy, and director of the Renewable and Appropriate Energy Laboratory. “We hope cities will use this information to begin to create highly tailored climate action plans for their communities.”

A key finding of the UC Berkeley study is that suburbs account for half of all household greenhouse gas emissions, even though they account for less than half the U.S. population. The average carbon footprint of households living in the center of large, population-dense urban cities is about 50 percent below average, while households in distant suburbs are up to twice the average.

Taking into account the impact of all urban and suburban residents, large metropolitan areas have a slightly higher average carbon footprint than smaller metro areas.

“A number of cities nationwide have developed exceptionally interesting and thoughtful sustainability plans, many of them very innovative,” Kammen said. “The challenge, however, is to reduce overall emissions. Chris and I wanted to determine analytically and present in a visually striking way the impacts and interactions of our energy, transportation, land use, shopping and other choices. Cities are not islands: they exist in a complex landscape that we need to understand better both theoretically and empirically.”

The UC Berkeley researchers found that the primary drivers of carbon footprints are household income, vehicle ownership and home size, all of which are considerably higher in suburbs. Other important factors include population density, the carbon intensity of electricity production, energy prices and weather.

“Cities need information about which actions have the highest potential to reduce greenhouse gas emissions in their communities,” explained Kammen. “There is no one-size-fits-all solution.”

“That would require a really extraordinary transformation for very little benefit, and high carbon suburbanization would result as a side effect,” Jones said.

“Population dense suburbs also tend to create their own suburbs, which is bad news for the climate,” explains Jones.

So if building more population-dense cities is not a viable solution for city planners, what is? The project website includes a tool that calculates carbon footprints for essentially every populated U.S. zip code, city, county and U.S. state (31,531 zip codes, 10,093 cities and towns, 3,124 counties, 276 metropolitan regions and 50 states) as well as an interactive online map allowing users to zoom in and out of different locations. Households and cities can calculate their own carbon footprints to see how they compare to their neighbors and create customized climate action plan from over 40 mitigation options.

In some locations, motor vehicles are the largest source of emissions, while in other locations it might be electricity, food, or goods and services. California, for example, has relatively low emissions associated with household electricity, but large emissions from transportation. The opposite is true in parts of the Midwest, where electricity is produced largely from coal.

The real opportunity, say the authors, is tailoring climate solutions to demographically similar populations within locations.

“Suburbs are excellent candidates for a combination of solar photovoltaic systems, electric vehicles and energy-efficient technologies,” said Kammen. “When you package low-carbon technologies together you find real financial savings and big social and environmental benefits.”

The authors argue that cities need to step out of traditional roles in planning urban infrastructure and learn how to better understand the needs of residents in order to craft policies and programs that enable the adoption of energy and carbon-efficient technologies and practices.

One example of this is the CoolCalifornia Challenge, a statewide carbon footprint reduction competition to name the “Coolest California City.” The program, run by Jones and Kammen and sponsored by the California Air Resources Board and Energy Upgrade California, will be accepting applications for new cities in February. Each city creates its own, targeted strategy to reduce barriers and increase motivation to engage residents in climate action.

“People need to act within their own spheres of influence, where they feel they can make the most difference,” Jones said. “We hope the information provided in these tools will help individuals, organizations and cities understand what makes the most impact locally and to enable more tailored climate strategies.”

The research was funded by the National Science Foundation and the California Air Resources Board.