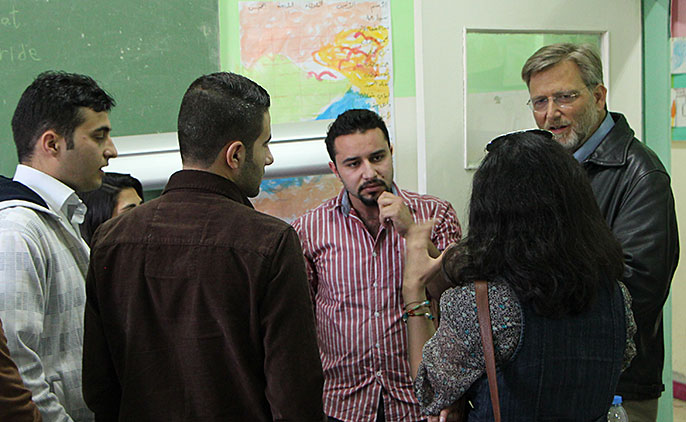 Professor Keith Watenpaugh, right, meets with Kurdish students in a classroom in Turkey to discuss their academic futures.

The war in Syria has had a devastating effect on that country’s university students and scholars, creating a lost generation, according to a recent University of California, Davis, report.

“The war will end but the young people who would be integral in rebuilding the country are being left behind,” said Keith David Watenpaugh, an associate professor and director of the UC Davis Human Rights Initiative, and lead author of the report.

Young Syrians have fled the violence in their homeland to the neighboring countries of Lebanon, Jordan and Turkey. While they have escaped one set of circumstances, they still lack educational opportunities and face discrimination in their new homes, he said.

As many as 70,000 Syrian university-age students are in Lebanon, but it is estimated that only 6,500 to 10,000 have been able to continue any form of higher education, according to the report. There are another 60,000 college-age Syrian refugees in Jordan and 70,000 in Turkey. Watenpaugh and his multidisciplinary research team have completed reports on Jordan and Lebanon and are completing a report on Turkey.

Their work identifies barriers Syrians face in accessing higher education in Lebanon, but it also identifies programs that are working, such as educational outreach programs by nongovernmental organizations.

The resilience of the young people impressed Watenpaugh, as some persevere to continue their education.

“It was surprising to me how hopeful they are that they can return to university even though they have been out for two or three years,” he said. “There’s a tremendous amount of frustration, but also evidence of initiative and an eagerness to study. Many of them work 12-hour shifts in bakeries, restaurants and in construction and still try to carve out time to study.

“As an educator I was deeply moved seeing young people willing to work so hard, but we don’t need the smartest young Syrians to be waiters and house painters — we need them to be the leaders of a new and better society. Most want to go back to Syria and rebuild their country and we should do all we can to help them.”

The report argues that young adults aged 18 to 24 — the subset of university students — should become a specific and internationally recognized category of humanitarian analysis and support. Universities in the region and abroad need to consider cooperative efforts including establishing counseling centers to assist students with continuing their studies, Watenpaugh said.

“I’m excited about a possible consortium of American universities in the Middle East working on this,” Watenpaugh said. “UC Davis already has relationships with the American University in Beirut and the American Lebanese University, and we have been in contact with them.”

A key recommendation of the report is that universities in Europe and North America should build collaborative relationships with universities and educational nongovernmental organizations in those states on the front line of the humanitarian crisis in Syria: Lebanon, Jordan and Turkey.

These relationships can lay the foundation for additional opportunities to support displaced and refugee students. The report also calls on American and European governments to show the “utmost flexibility” in granting student and visiting scholar visas to displaced Syrians.

“All of these policies are within reach and UC Davis is uniquely positioned to show global leadership in this field,” Watenpaugh said.

The report, “The War Follows Them: Syrian University Students and Scholars in Lebanon,” published by the Institute of International Education in conjunction with UC Davis, is available online. The report was supported by the Carnegie Corporation of New York.