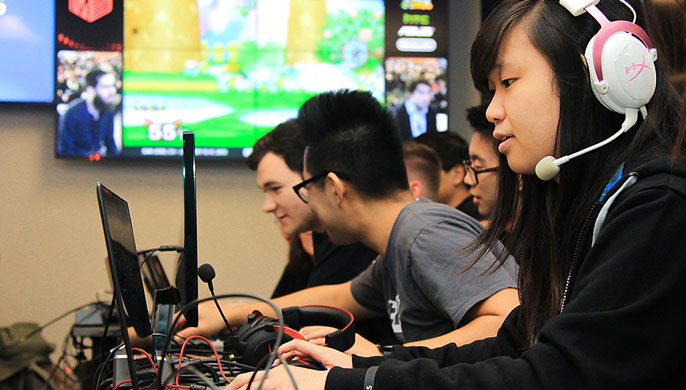 Kathy Chiang wears her love of gaming on her sleeve. Or wrists, actually. She often sports rubber bracelets inscribed with the logos of her favorite computer games, including League of Legends. A recent University of California, Irvine graduate, Chiang served as president of the campus’s Association of Gamers during her last year at the university. She also designed video games as part of her major, computer game science. So it should come as no surprise that Chiang is an enthusiastic supporter of UC Irvine’s new eSports initiative, which encompasses an official League of Legends team, a state-of-the-art gaming arena and a scholarship program for team members.

“Online and role-playing games allow you to get immersed in fantasy worlds and the lives of the characters you’re playing,” Chiang says. “It’s like literature, except you have a say in what happens. The possibilities seem limitless. Strategy games can be as satisfying as playing sports, and the teamwork aspect is similar.”

The gaming world can be a bit of a boys club, and female gamers have been targets of harassment and bullying. At UC Irvine, though, they’ve found a strong support network.

“At the collegiate level – and especially at UC Irvine – you do see more girls in gaming, and women are involved in leadership positions with campus gaming clubs,” Chiang says. “There’s something about UC Irvine that enables girls to do more with gaming, whether as players or designers and developers of games.”

Chiang is part of a diverse community of gamers who have advised UC Irvine administrators on the development of the eSports initiative, an effort led by Mark Deppe, assistant director of events & student programming.

Survey: 74 percent of campus are gamers

“We hope to attract the best gamers with scholarships and an elite training facility,” Deppe says. “UC Irvine already has a highly regarded computer game science major, and it can truly be a school of first choice for students interested in gaming and technology.”

He surveyed 1,200 students on campus and found that 74 percent identified as gamers. The figure doesn’t surprise Jesse Wang, president of The Association of Gamers.

“Most gamers I know also study a lot,” he says. “In a traditional university setting, some of these students might feel like they don’t fit in. UC Irvine is very gaming- and STEM-friendly and has a home for gamers. If you come here, gaming can be a big part of your academic and social life.”

Video games have come a long way since the days of Pac-Man and Super Mario Bros. About 70 percent of Americans between the ages of 8 and 64 say they play video games. And more people play and watch e-sports – competitive multiplayer online games – than watch the NBA finals, World Series or college football playoffs.

Gaming as "a calling and a labor of love"

Morgan Romine, a Ph.D. candidate in anthropology at UC Irvine, knows a bit about how the love of gaming can straddle academic and personal lives. Her dissertation is on the ethnography of video game design.

She conducted her fieldwork in a local game design studio and discovered that employees saw their jobs as both a calling and a labor of love.

“What’s noteworthy is that designers are almost always themselves really dedicated gamers and passionate about gaming as a lifestyle,” she says. “You can’t say the same about designers in other fields.”

A longtime champion of diversity and inclusion in e-sports, Romine was named one of 2009’s Most Influential Women in Tech by Fast Company and is the former captain and co-founder of the Frag Dolls, the first all-women e-sports team to win a professional gaming tournament.

Collegiate teams are catalysts for diversifying the sport, she says: “The great thing about them – and UC Irvine eSports – is that they provide the opportunity to build and support women at the amateur level. It’s purely a numbers thing. Only about 5 percent of pro players are women, so you aren’t seeing them in the top 10. When you build a groundswell at the college level, you’ll see more women advance in the sport.”

UC Irvine’s gaming arena and League of Legends team are set to debut this fall.