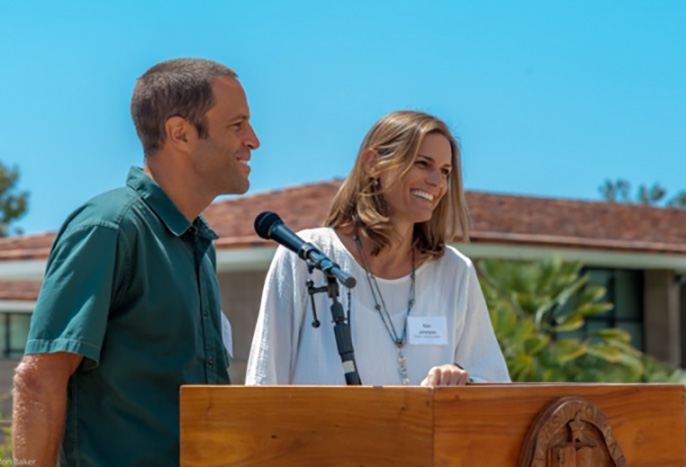 Call it something to grow on. And then some.

Ever an institution to advance all things environment and sustainability, UC Santa Barbara is flourishing in a pursuit uncommon for a beachside campus: farming. Two years after pot-planting a duo of citrus trees beneath Storke Tower, UC Santa Barbara has now added a hydroponic vertical garden near the Recreation Center.

All credit to the Edible Campus Program, a collaboration of the Associated Students (A.S.) Food Bank, the A.S. Department of Public Worms (DPW) and UC Santa Barbara Sustainability that seeks to grow fresh produce on campus, for campus, in the interest of food security, food justice and sustainability more broadly.

The biggest driver of this thriving effort: UC Santa Barbara students, with key support from two prominent Gaucho predecessors — Kim and Jack Johnson. The educator and musician, respectively, through their Johnson Ohana Foundation, have partnered with Edible Campus since its inception, providing both mentorship and money.

It was a no-brainer for the couple who found each other, and a passion for food, at UC Santa Barbara — and whose many philanthropic efforts center on environmental education.

“The neat thing about a garden is that it continues to grow, and it always improves as long as you put love into it,” said Jack Johnson. “If there is anything we can do with UCSB to put something back into the school that has given us both so much, a garden or farm is the perfect thing. By the time our kids are there it’s something they could work on, to continue to put love into and help grow it even more. It’s always fun to see how a garden grows and evolves, and that’s what I’m so excited about. This is something that every time we come back and visit UCSB, we can watch improve.”

There will be a lot to see.

Along with raised beds of row crops, the farm’s design calls for multiple companion plantings, such as corn, beans and squash. A multilayer permaculture garden of trees tall and short, bushes and low-lying plants — all integrated together — will reflect the production potential of a forest-style structure. A composting demonstration area will include both worm composting and hot composting units. On top of all that, a dedicated, flexible space for pre-K-12 and college-level education is also in the plans.

“We knew UCSB had been doing amazing things in the area of food and food waste, and it’s definitely something we wanted to jump on and help push forward,” said Kim Johnson. “It’s really exciting that they’re running with it. It’s so great to see.

“Whether you think you’re an environmentalist or not, everybody eats, so when you talk about food it’s a very unifying platform to get people motivated — especially kids,” she added. “Start there, start a garden. It’s a natural place to teach from. Then they’ll have appreciation for where their food comes from, and it trickles down to appreciating everything the environment gives us.”

Once all three Edible Campus installations — the orange trees, the tower garden and the farm — are in full production mode, UC Santa Barbara hopes to double, from 25,000 pounds to 50,000 pounds, the amount of fresh produce distributed annually by the A.S. Food Bank. That’s according to Katie Maynard, campus sustainability coordinator for UC Santa Barbara.

“The potential impact is enormous — and not only in terms of the fresh produce and healthy options students will have access to,” Maynard said. “By growing fresh produce right here on campus, we can give students a direct connection to the land, to understand where their food is coming from and to have some level of food sovereignty. They will get to see the whole process — where their food was grown, how their food was grown and how it got to them.

“Kim and Jack Johnson got involved very early on and were excited to help us think through what food production could look like on campus,” Maynard continued. “They gave us advice and guidance as to how we could start a project like this, they connected us to other school garden programs and school farms so we could learn best practices from other institutions. So they’ve been involved not just from a financial end, but also in terms of advice, mentorship, networking and really being full partners in the project from day one. We look forward to keeping that relationship going over time.”

The idea for a campus farm has long been in the sights of the Department of Public Worms, a composting collective. Turning food waste into fresh food through composting, presented the opportunity to create and model a so-called “closed loop” system in the UC Santa Barbara student community. As the number of students using the A.S. Food Bank for supplemental sustenance grew, the need became even clearer.

A successful pilot outing with the citrus trees — the oranges are all donated to students via the food bank — provided additional momentum for what has now evolved into a comprehensive food production program. Robust educational components for toddlers on up will include everything from gardening classes and science instruction to planting lessons for preschoolers.

And that’s what takes the Edible Campus Program to a new, essential level, said Kim Johnson, who worked on a local farm during her UC Santa Barbara days.

“The campus farm can also be used as a teaching tool for teachers to learn how to integrate gardening into their curriculum,” she said. “At the university level there are so many ways to bring awareness to this. Think about the undergrad student riding around campus and seeing a citrus tree. Having these visual, tangible examples with Edible Campus is so perfect. It’s been really exciting to hear what they’re already doing, hear their ideas and contribute our ideas. I really think this program has legs and it’s going to take off.”

In fact, Edible Campus will get another boost courtesy of the couple’s All At Once campaign, which benefits selected community groups and nonprofits at Jack Johnson’s tour stops, and offers a matching donation opportunity to inspire alumni and the broader UC Santa Barbara community to support the program.

Added Jack Johnson: “It’s such an inspirational time to be going to school anywhere, and from our experience we know what it was like to be at UCSB. I remember that feeling of creating something for the first time. To meet the students in this realm of gardening work and farm work, and we’ve met a lot along the way, who are so inspired, they have inspired us.”