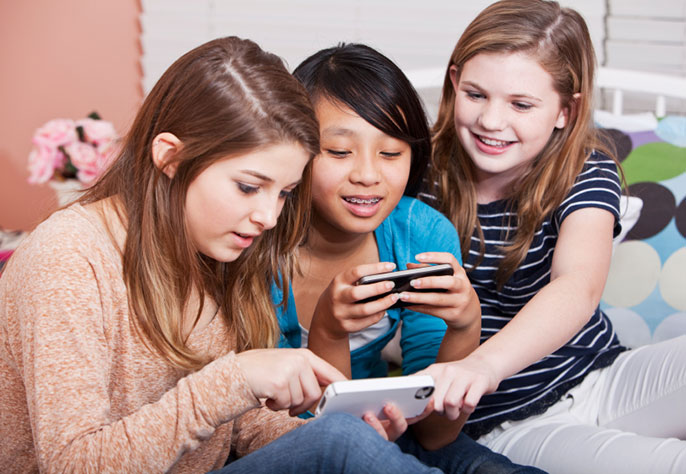 In this digital age, we have assumed that smartphones and apps are the new normal for youth.

A recently released Pew Research Center report on teens and technology further corroborates this belief by showing that 88 percent of U.S. teens have access to a mobile phone. Of these, 73 percent have smartphones and 15 percent only a basic cell phone.

But it’s worth pausing to consider what online participation looks like for the 15 percent of teens with basic cell phones or the 12 percent who don’t have access to any form of mobile phone and what kind of a new “digital divide” might be emerging.

In other words, low-income teens are unable to participate in the social media conversations of their wealthier peers.

Our team at the University of California, Irvine, has been conducting research and developing programs in coding and digital media for these less-connected youth. The nationally representative sample in the Pew data provides context for these populations of urban teens who we work with day-to-day in Southern California.

Teens use of social media

Last summer, we helped organize and conduct research on a digital storytelling course for teens in South Los Angeles. The 30 teens who participated all came from low-income households, were evenly split in gender and were predominantly Latino, with some black and Asian participants.

We designed one program around photo-sharing apps and mobile phone cameras, as we believed that was what teens would be most comfortable doing. It turned out, however, that none of them had an Instagram account and few had ever shared a photo online.

We were struck by the contrast between the subjects of our study and those in the Pew study.

More recently, we conducted interviews with 14 teens in the same demographic, who were participating in a workshop using the Scratch programming platform, a creative online learning tool in which young people can develop and share their stories, animations and games.

When we asked the teens participating in this program about their mobile and social media use, all of them said they texted to keep in touch with friends and family.

Only half had a smartphone.

None of them used the photo-sharing tool Instagram. Only one used Snapchat, another photo messaging tool. They did have Facebook accounts, but none described themselves as active on the site. In a group interview, one of the boys called out the one boy who did use Snapchat. “We are all ghosts on social media except you. You have Snapchat.”

What’s notable is that these low-income teens do not use the social media in ways their wealthier peers do. One of our interviewees notes that she doesn’t use social media at all. “When I’m on my phone, I’m either reading or texting,” she said.

Peer groups will gravitate to the modes of communication that are most widely shared.

In low-income communities, fewer teens have smartphones, so texting is the most common mode of communication. It’s no fun being on Instagram and Snapchat if your friends are not.

In other words, the shift to smartphones means low-income teens are shut out of the dominant communications media of their generation.

These observations are backed by the Pew survey data. Teens in wealthier households are more likely to have smartphones and to prefer Snapchat and Instagram.

For Instagram, the differences are less pronounced but the survey shows a slight tendency for teens in higher income brackets to prefer the app. That’s not surprising given the high cost of mobile Internet plans. Contrast that with Facebook use, which is higher among lower income teens.

While 51 percent of teens in households earning less than $30,000 use Facebook often, only 31 percent of the teens in the wealthiest households, earning more than $100,000, do so.

Facebook can be accessed through a shared family PC or a public library computer, making it a much more accessible platform than those that rely on smartphone connectivity for an app.

An area of concern

Teens’ access to Snapchat and Instagram may not seem like something we should be terribly concerned about, but it is an indicator of deeper and troubling forms of digital inequity.

Social digital and networked media use is where young people gain everyday fluency and comfort with the technology and social norms of our times.

Whether it is managing a LinkedIn network or learning to code, young people who lack digital fluency and full access will always be a step behind their more connected peers.

In many ways, this emerging smartphone divide is more troubling than the digital divide we faced back in the 1990s. The digital divide at that time described the gap between those who had access to desktop computers and the Internet and those who did not.

Public concern led to policies and community efforts to bridge the divide through public infrastructures. Schools and libraries emerged as important access points for children and youth who did not have access at home.

Today’s smartphone divide is potentially much more difficult to bridge as it goes hand and glove with expensive consumer technologies and private infrastructure.

We need to address this new divide head-on before it becomes entrenched in the experiences of this rising generation.