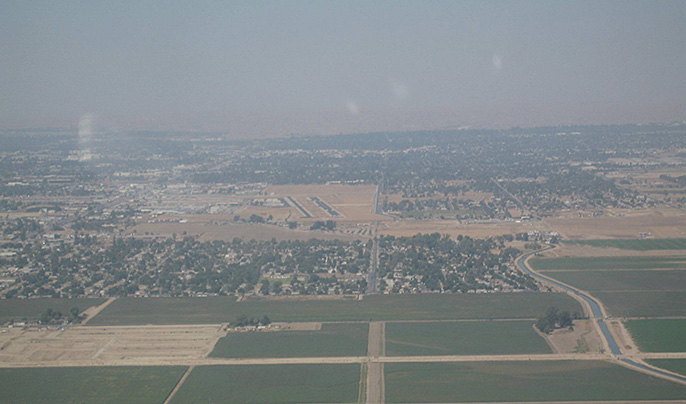 Much of the smog over Bakersfield and the rest of the San Joaquin Valley comes from as far away as Asia.

Approximately 10 percent of ozone pollution in California’s San Joaquin Valley is estimated to be coming from outside of the state’s borders, particularly from Asia, according to preliminary research presented today (March 31) by the University of California, Davis.

Secondhand smog from Asia and other international sources is finding its way into one of the nation’s most polluted air basins, the San Joaquin Valley. UC Davis atmospheric scientist Ian Faloona shared his research with air quality regulators and scientists today at a transboundary pollution conference near Yosemite National Park. The issue serves as an example of how air quality is a global — not just local — problem.

“To me, it’s an exciting new chapter of how we think of air pollution,” Faloona said. “How do we deal with this not just as an air district of a couple of counties, but as a nation and a global citizen of the planet? Traditionally, air pollution has always been considered an issue to be handled locally, ‘It’s your backyard, it’s your problem.’ But we’re going to have to treat air pollution to some extent how we treat greenhouse gases.”

Up in the air

When someone smokes a cigarette next to you, you know that secondhand smoke is harmful to your lungs, even though you aren’t the smoker. But what about when your neighbor is thousands of miles away, and the pollution they are emitting is from an industrial plant, millions of cars, or a raging wildfire?

Scientists have long known that a portion of ozone pollution was coming from overseas, but attempts to quantify just how much were hamstrung by coarse computer models that overlooked or broadly simplified California’s complex terrain.

UC Davis researchers have spent the past three years trying to measure that contribution from a mountaintop air quality monitoring station near California’s Point Sur. They’ve also gathered it from a plane equipped with scientific instruments that measure air pollutant levels — a flying air monitoring station of sorts. The combined data has allowed them to analyze the “signature” of the sources and quantify how much of the valley’s ozone pollution is locally produced, and how much is drifting across from international sources.

The research comes as the U.S. Environmental Protection Agency has proposed tightening ozone limits from 75 parts per billion to between 65 ppb and 70 ppb, later this year. (A final rule is due Oct. 1.) In the San Joaquin Valley, which includes the cities of Fresno, Stockton and Bakersfield, asthma rates are roughly twice that of the rest of the state. Such a change by the EPA is expected to push much of the valley further out of compliance.

Air districts are financially penalized and considered out of compliance for going over federal ozone pollution thresholds, known as National Ambient Air Quality Standards. As they continue to work to improve local air quality, regulators have an increasing stake in being able to account for how much pollution is within their local control and how much is not.

“In addressing the tremendous public health challenge we face in reducing ozone, it is critical to accurately identify the sources of ozone pollution so that solutions can be appropriately targeted,” said Seyed Sadredin, executive director of the San Joaquin Valley Air Pollution Control District. “The scientific information being discussed at the transboundary ozone conference will be invaluable to many regions throughout the nation.”

Faloona notes that the majority of the air pollution in California is coming from local sources, which requires further work. His research is not about pointing fingers but about having a clearer picture of where pollution comes from — and how a global community can help reduce it.

“One of the reasons I was so drawn to atmospheric science is because we’re intimately sharing this substance that’s totally vital to us,” Faloona said. “Air is something that we have to share. To me, it’s always been an obvious connector of people. We’re becoming more cognizant of how connected we are and how all of our decisions have to be made on a global scale from here on in.”

The research was funded by the San Joaquin Valley Air Quality Control District.