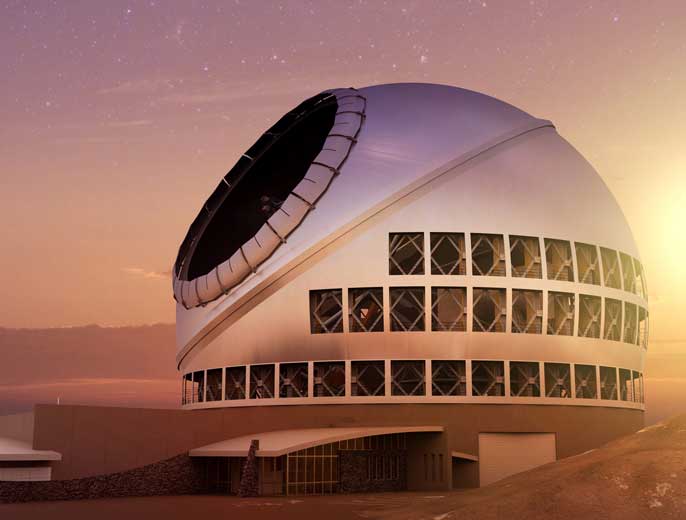 The University of California is on a mission to revolutionize humankind’s understanding of the cosmos, by building the world’s most powerful telescope.

That epic quest took a big step forward Thursday when the Board of Regents approved UC’s financial participation in the development and operation of the Thirty Meter Telescope, commonly known at the TMT.

Once complete, the TMT will be the largest and most powerful land-based optical/infrared telescope on Earth.

The project — which has been spearheaded by UC and the California Institute of Technology since 2003 — will be built and run by a consortium of universities and scientific organizations from Canada, China, India and Japan.

The Thirty Meter Telescope will stand atop the Mauna Kea volcano on the island of Hawaii, near the W.M. Keck Observatory that UC has operated with Caltech since 1993. Groundbreaking on the eight-year project is expected to occur later this spring, with the telescope becoming fully operational by 2022.

Along with allowing UC astronomers to collaborate internationally, the telescope "promises to revolutionize our understanding of the universe, and will benefit the eight UC campuses that have vibrant astronomy and astrophysics programs,’’ said UC spokesman Steve Montiel.

TMT scientists and engineers, including those affiliated with UC, have been working for years on the design of the telescope. Its primary mirror will be comprised of 492 individually segmented mirrors that will work together as a single reflective surface 30 meters across — a size slightly larger than a basketball court.

Clear view of the cosmos

Special adaptive optics will correct for the blurring of Earth’s atmosphere, enabling the TMT to study the universe as clearly as if the telescope were in space.

The technologies for building segmented-mirror telescopes and for adaptive optics corrections were pioneered by UC scientists and have been realized in the extremely successful Keck Observatory telescopes.

The total cost is estimated to be $1.2 billion, an amount shared by the various consortium members. UC is funding its share primarily through private donations.

The Gordon and Betty Moore Foundation already has contributed $250 million, a gift shared equally by UC and Caltech. UC and Caltech are now raising $100 million in matching funds. UC's $50-million share is being raised by campus leaders through philanthropic support, building on relationships between the university and generous donors.

As Yang and others have noted, UC has been a world leader in astronomy and astrophysics research for more than 125 years, and the TMT will build on that history.

Among the discoveries made by UC researchers:

With the TMT, UC expects to continue to build on that history of discovery. The TMT is expected to allow astronomers to analyze the light from the first stars born after the Big Bang, directly observe the formation and evolution of galaxies, see planets around nearby stars, and make observations that test fundamental laws of physics.