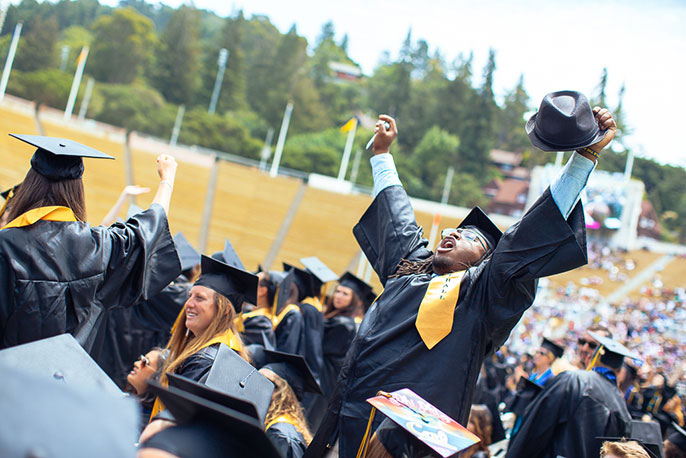 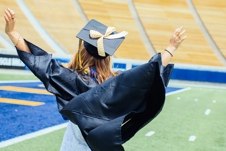 Of those earning undergraduate degrees:

On a morning when the sky itself seemed to wear blue and gold, 4,000 newly-minted Berkeley grads hugged, cried and pumped fists into the air.

“Whoa, that feels good!” shouted one young man, stopping mid-field to raise his arms in jubilation. Around him flowed a river of black robes and mortar boards, many sporting messages like “Dream Big,” “and “Thanks, mom and dad.”

From the stands came the roar of 20,000 beaming onlookers. Youngsters craned necks to get a glimpse of the graduates; uncles and grandmothers cheered and waved; and proud parents snapped photos and dabbed their eyes.

A similar scene is unfolding at every one of UC's 10 campuses this spring. In all, the University of California will award 62,000 degrees — each representing a unique story of triumph.

“The cycle of struggle ends with me,” a jubilant Mariah Castro proclaimed as she prepared to take the field at Cal's Memorial Stadium for Berkeley’s commencement ceremony. “My mom is so proud,” said the social welfare major who, along with earning straight As and a student leadership award, is the first in her extended family and one of the few from her community to successfully complete a college degree.

Castro's background is far from unusual in the 10-campus university system. UC alums include military veterans, undocumented students, those who returned to studies after years in the workforce, and those who have persevered through illness and disability. Almost half of those earning their bachelor's degrees this year come from low-income families, and roughly 40 percent are the first in their family to go to college. Almost a third started their education at community college.

It’s a diversity of economic and social backgrounds unmatched among any other top-tier university in the country. “Our new graduates are evidence that here in California, the American Dream is alive and well,” said UC President Janet Napolitano. “These are the men and women who won’t just fuel today’s workforce. They will redefine tomorrow’s.”

A journey from struggle to opportunity

For all those who don cap and gown this spring, their UC diploma represents a hard-won accomplishment — the result of years of effort, long hours in the library and lab, and countless coffee- and ramen-fueled study sessions.

But for the roughly 25,000 graduates who come to the university from backgrounds of economic disadvantage, it also signifies something else: a ticket out of a life of hardship and the chance to establish a new, more hopeful legacy.

“This isn’t just for me. It’s also for my mother and younger brothers,” said Castro, recalling her journey from a rough Salinas high school to the top-ranked public university system in the nation.

A disruptive ninth grader who was often kicked out of class, Castro was told by one of her teachers she’d never go to college. But when her mother lost her job and struggled to buy food and pay rent, Castro realized she had to apply herself if she was to hope for a different life for herself and her brothers.

“I knew the only way they would have opportunities was if I set the example,” said Castro. “I had to step it up and be a role model.”

Adjusting to the academic rigor of Berkeley was difficult at first. When Castro failed her first mid-term, she called home in tears, afraid she didn’t have the chops to make it. And she faced outside circumstances that compounded the pressure, such as needing to send money home to keep her family from being evicted from their apartment.

She became active in the Educational Opportunity Program (EOP) — a program which has counterparts on every UC campus — that provides resources to help low-income and first-generation students succeed. The program, where Castro became a peer advisor, helped her gain academic confidence and leadership skills. It even made it possible for her to attend her graduation ceremony by providing no-cost regalia on loan.

“I was just trying to survive at college,” she said. Her experiences at UC, she said, “taught me to lead.”

As one of the nation’s first public universities, UC was founded on the ideal that any academically qualified student — no matter how humble their beginnings — would have access to a world-class education.

At a time when the nation’s top colleges and universities are struggling to serve those on the lower rungs of the economic ladder, UC stands apart.

Since UC began tracking data in 2000, the university has enrolled an increasing number of low-income and first-generation college-going students each year — and has done so in spite of deep cuts in state funding. The university now serves more low-income students than any other instititution of its caliber.

More than half of California residents who enter UC pay no tuition at all, thanks to need-based aid programs like UC’s Blue and Gold Opportunity Plan, available to families with incomes of $80,000 or less. Almost three-quarters of UC students get some form of need-based assistance.

In addition to financial support, programs on every UC campus, like EOP, provide a portfolio of services to support those students who are from backgrounds traditionally underserved by higher education.

The result: These students succeed on campus and graduate at a high rate — one that equals or comes close to matching that of their more affluent peers. They go on to graduate and make important contributions to the workforce, the economy and the well-being of others.

“You think of colleges generally as a place where most of the people are privileged. Here, there’s such a big population of people who just never thought they’d be able to go to college,” said UC Berkeley graduate Alyshia Macaysa, who earned a double major in social welfare and psychology.

Watching her from the stands were her father, a high school graduate who works as a roofer, and her mother, an immigrant from the Philippines who only completed sixth grade. “I’m fulfilling their dream today too,” she said.

As UC’s newest graduates go out into the workforce, they bring the brainpower, innovation and passion for public service that will improve the well-being of people everywhere.

Addressing the throng at Berkeley’s graduation, Chancellor Nicholas Dirks called upon graduates to be outspoken defenders of public higher education, what he called one of America’s greatest ideas.

“Public higher education has been fundamental to enabling people to reach their full potential and at the same time achieve the full potential of our society,” he said.

It’s a message that resonates for graduates like Castro. She now is off to a summer internship at a Bay Area philanthropic foundation and then to a master’s program in social welfare at the University of Pennsylvania.

Inspired by her example, her mother went back for an associate’s degree, and her brother just enrolled in a four-year college.

As for herself, what once seemed to be a narrow window of options has opened onto a vista of possibility.

“I feel like I can do almost anything,” Castro said.