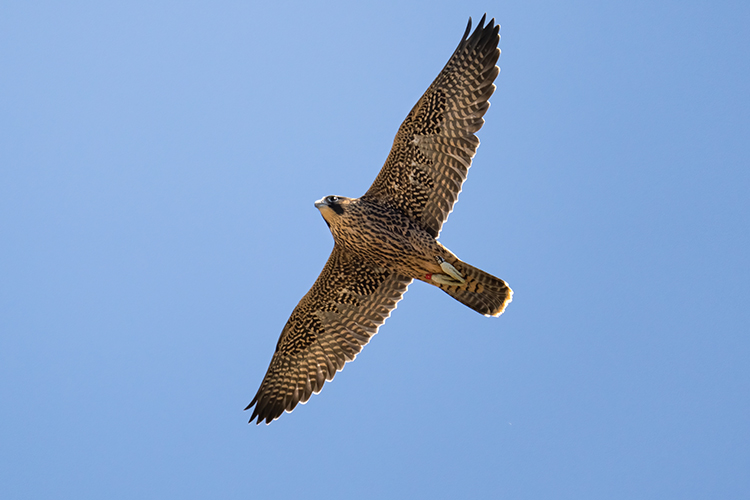 Fauci, so far, is the strongest flier of the three falcon brothers.

Fauci flew first, fledging off UC Berkeley’s Campanile in late May to a tree south of the bell tower, then to Stephens Hall, and on to Evans Hall. There, he was chased by crows until his mother, Annie, flew to his defense.

His brother Kaknu went next, making a big circle out and back from the Campanile, later flying to Stephens Hall, then Evans. The next day, Wek’-wek took his first flight, also doing a loop from the tower and eventually flying to Evans.

For the next few months, all three of the campus’s newest peregrine falcons — male triplets born in April — will be in flight school, practicing takeoffs and landings, perching and, most importantly, hunting.

Fauci, already proving to be an incredibly strong flier, even has attempted a mid-air food exchange with his mother, Annie.

“Hunting training occurs when parents will first attempt mid-air prey handoffs with the chicks, which eventually graduate into dropping dead prey for the chicks to catch, simulating a hunting dive,” said Lynn Schofield, an ornithologist who co-runs the Cal Falcons program with her husband, Berkeley Ph.D. candidate Sean Peterson. “They will often fly together and will often play with and chase each other, which hones their flight skills.

“Learning to hunt takes a lot of work, but is incredibly important. Many young raptors starve to death or get injured in hunts in their first year of life, so the more practice they get with their parents, the better.”

Fauci’s brothers watched his flights around the tower by peeking through the Campanile’s fleur-de-lis ornamention, said Peterson.

“Kaknu and Wek’-wek definitely spent Thursday, Friday and Saturday watching Fauci fly around,” said Peterson. “Fauci would fly in and stop by to say hi to his brothers and eat meals with them occasionally.”

Meanwhile, falcon parents Annie and Grinnell “are keeping a pretty close eye on all the chicks’ first flights and landings,” he said. “They’ve got pretty good tabs on where everyone is.”

Fauci even spent last Thursday night on Evans Hall, and his mother brought him food there.

Also watchful was a team of about 15 Fledge Watch volunteers who for six days, and for 12 to 14 hours a day, diligently and continuously monitored the falcons from below the tower, eyeing their first flights “and ready to help if a chick ended up in a dangerous spot,” said Schofield.

“The purpose of Fledge Watch,” added Mary Malec, a Cal Falcons and Fledge Watch member who monitors local raptor nests for the East Bay Regional Park District, “is to be there if the fledglings hit a building or land on the ground — to get them to safety, to get their health checked and to return them for a do-over.”

Also on the team was John Davis, a photographer who specifically takes photos of raptors. For five years, he’s captured the drama and majesty of Annie, Grinnell and their youngsters during Fledge Watch.

“In 1972,” he said, “there were two known peregrine falcon nests in California, as their population was nearly wiped out by the pesticide DDT. Many of the biologists and conservationists I work with figured that they would never see a peregrine falcon in the wild. Now that the falcon population is recovering, we are all able to watch these beautiful raptors raise another family in front of us, shoulder-to-shoulder with many of the people that dedicated themselves to the decades of hard work it took to get here. “

Davis added that the birds’ beauty is “amazing, it’s timeless.”

So that everyone could be part of Fledge Watch this year, with the campus closed, Cal Falcons ran, for the first time, a 12-hour livestream, using a phone mounted on a wildlife spotting scope below the tower, “so viewers could see the young getting prepared for their first flights on the ledge below the balcony,” said Schofield.

Each stream was about 2 ½-hours long and had at least 10,000 unique viewers. Peterson and Schofield also held a Q&A during the livestream.

“People were watching from all over the world,” said Schofield, “chiming in from places including Japan, Australia, the UK and parts of eastern Europe.”

Said Peterson of Cal Falcons’ livestreamed event, “It felt like this exciting party with hundreds of friends hanging out and cheering on these birds taking their next big step. Even though we weren’t able to all gather together in person, it was amazing to share this moment with so many people around the world.”