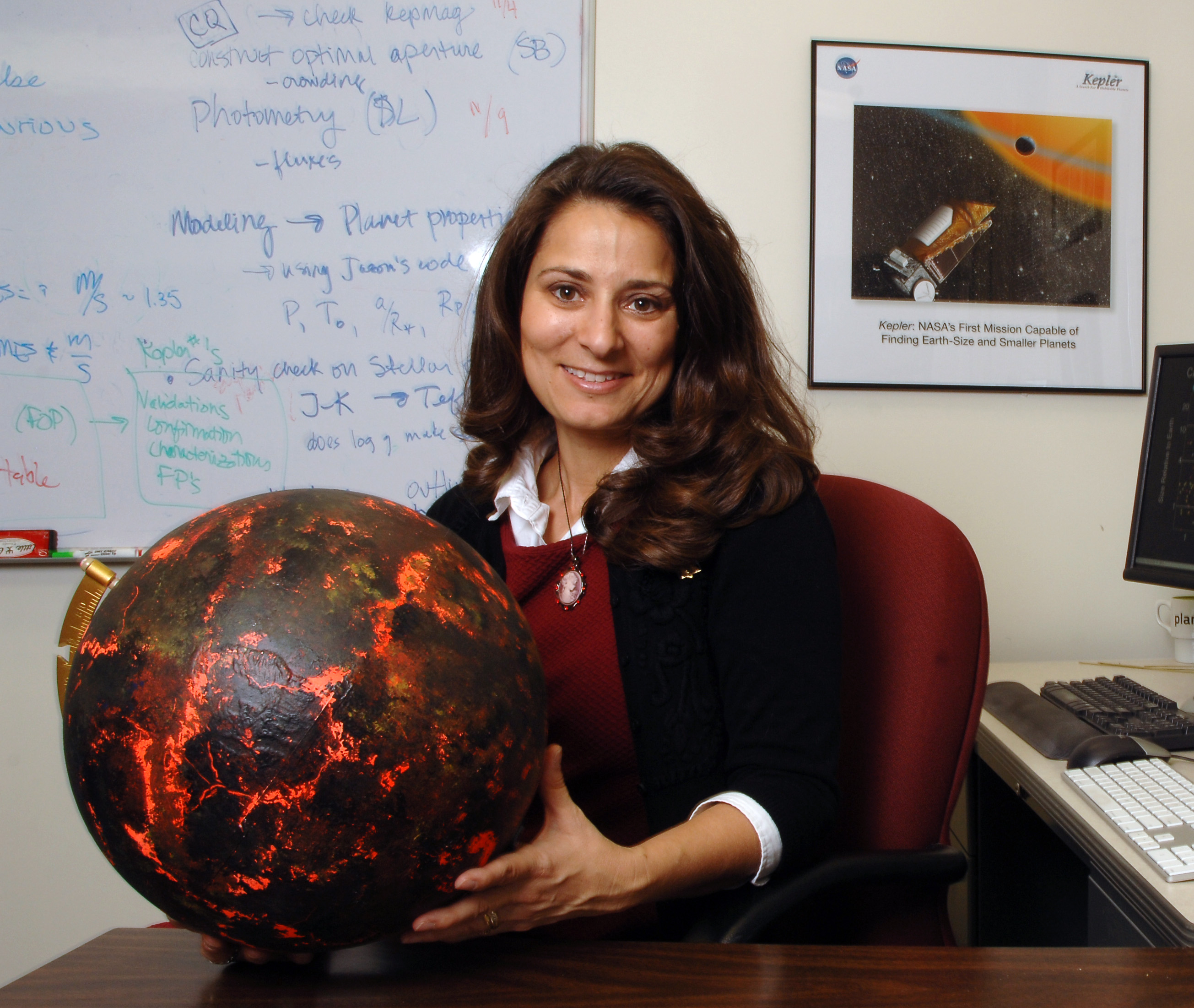 When Natalie Batalha was 15 years old, she bounded down the stairs and announced to her startled mother that she’d decided to become a philosopher.

Thirty-five years later, that declaration would land Batalha on Time magazine’s list of the 100 most influential people on Earth. But the ranking would not be for her philosophical musings.

Instead, Batalha, 50, is one of the world’s foremost planet hunters, a Marco Polo of the universe whose team has discovered approximately 4,000 new planets, some of which may turn out to be capable of supporting life.

But the need to answer the great philosophical questions about who we are, why we are here, and where we are going, was — and still is at the heart of what Batalha does.

Spend time with Batalha, who earned her Ph.D. in astrophysics at UC Santa Cruz, and amid talk of transit photometry and spectroscopic methods, she’ll speak about how human survivability depends on empathy and how empathy is deepened by knowledge. She’ll describe how the cells in our bodies were manufactured in the core of stars which, therefore, connects every human on the planet, and talk about the poignancy of the moment she walked out of the redwoods at UC Santa Cruz after a day of studying lifeless planets and was overwhelmed with the idea of the fragility of our existence.

Discovery, she believes, is fundamental to human survival. And, right now, Batalha is at the forefront of a rapidly growing field of knowledge that a UC Santa Cruz astronomer described as “one wild ride.”

Adding up the universe

The building that houses Batalha’s office at NASA’s Ames Research Center is flanked by a cracked asphalt road called Pioneer Avenue. But that’s about the only nod to the game-changing work that is going on inside. The concrete structure is a warren of small offices and long fluorescent-lit hallways, with Batalha’s workspace no different than any other, despite the fact she is lead scientist for one of NASA’s most significant projects: to find Earth-sized planets that may lead us to an answer of whether we are alone in the universe.

Batalha came to science in a roundabout way. Her teenage pronouncement that she would become a philosopher arrived after she became disillusioned with the Catholic religion she’d studied and read the 1970 novella, Jonathan Livingston Seagull. The book seeded the idea in her that the way to enlightenment was through the pursuit of knowledge.

Then, she took a physics class.

“When I saw the universe could be represented through numbers and equations, it blew me away,” Batalha says. “I thought, though mysterious, the universe is not just chaos. It’s not a collection of meaningless, random events. If we can uncover the secrets of the universe through numbers, then what limits are there to what we can learn?”

Still, she hadn’t planned to be become a scientist. That event happened at a summer internship at the Wyoming Infrared Observatory. On one of Batalha’s first days there, her faculty advisor handed her a bunch of data concerning a star called HL-Tau and a surrounding disc from which, it was thought, exoplanets could form. The problem was, the information wasn’t making sense.

By the end of the summer, Batalha had figured out why.

“I was given a puzzle to solve,” Batalha says. “Putting the pieces together was challenging but fun. And just like a puzzle, there was immense gratification when it was solved and you could see the big picture. But here, as often is the case with science, I got to see something that no other human had ever seen before.”

Her life would take another turn, however. By the time Batalha took her last final exam at UC Berkeley and decided to go to graduate school, she was pregnant with her and her husband’s first child.

What would follow was years of child-rearing — she has four children — mixed with the demands of research and her husband’s own astrophysics career.

Raising a family while studying the stars was not easy. Even though her professors at UC Santa Cruz were accommodating, there were missed conferences, unconventional hours, and summers spent with her children instead of doing research, she says.

Still, her then-advisor, UC Santa Cruz Professor of Astronomy Steve Vogt, who built a planet-hunting spectrometer that was mounted on the 10-meter Keck-I telescope in Hawaii, remembers her talent and drive. Given only a small window of time to use the powerful instrument to Doppler-image stars, Batalha figured out which stars were amenable to being imaged in a short amount of time and how it could be done.

“By golly, she lowered her head and muscled through it and made a fine project out of it (the imaging),” he says.

Then, chance stepped in.

As Batalha tells it, she was sitting in the office of Gibor Basri, a professor of astrophysics at UC Berkeley and a member of her doctoral thesis committee, when she noticed a report on his desk from a NASA Ames scientist about a new way to detect Earth-sized planets circling other stars.

Called transit photometry, it measured the brightness of a star and then looked for dimmings that would indicate the presence of an Earth-sized planet as it orbited the star. Batalha, who had been studying magnetic activity and sunspots on young stars, wondered how the method could distinguish between sunspots and planets and promptly wrote the scientist a letter.

By February 2000, she was working with the NASA Ames team on that question, and by the next year, a plan to launch a space telescope called Kepler, which used transit photometry, was given the go-ahead thanks to her help. She also won a teaching position at San Jose State University about the same time.

Batalha gets up and begins to sketch a wave of disordered dots on her office whiteboard, describing the moment she and other Kepler scientists realized they’d accomplished what they set out to do.

“The brightness measurements looked like beads on a string,” she says, drawing a line of more distinct dots through the chaotic scattering to mark the spot where a star’s light dimmed. “At that scale, you couldn’t see the measurement noise. It was just beautiful.”

Even more “beautiful” was the team’s discovery in 2015 of an Earth-sized planet orbiting a star in what is known as the “Goldilocks Zone,” the sweet spot where a planet is just the right distance from its star so that liquid water might pool on the surface. Two to three dozen similar planets have now been discovered.

So, is there intelligent life out there?

Batalha says she hopes there is but it may be up to her eldest daughter, an astrophysicist who is also studying exoplanets, to answer.

Batalha lays out upcoming NASA undertakings: a project to help characterize the atmosphere of the most promising planets and, later, another space-based telescope that can look at the surface structure of these planets to determine if they might be habitable. The latter wouldn’t launch until 2030.

“I’ll be at retirement age by then,” Batalha says and smiles. “Luckily, my daughter will be able to pick up where I leave off.”