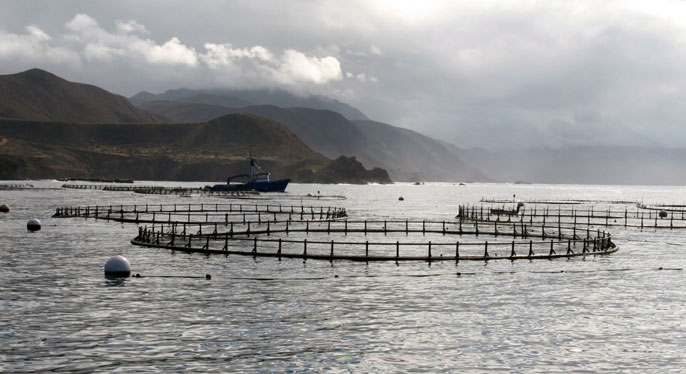 Covering 70 percent of Earth’s surface, the world’s oceans are vast and deep. So vast, in fact, that nearly every coastal country has the potential to meet its own domestic seafood needs through aquaculture. In fact, each country could do so using a tiny fraction of its ocean territory.

So finds a study led by scientists from UC Santa Barbara and including researchers from the Nature Conservancy, the National Oceanic and Atmospheric Administration and UCLA. Their research, published in the journal Nature Ecology and Evolution, demonstrates the oceans’ potential to support aquaculture. Also known as fish farming, the practice is the fastest-growing food sector, and it’s poised to address increasing issues of food insecurity around the globe.

“We need to find more protein for our growing population, and we have pretty much tapped out wild fish as protein sources,” said study co-author Peter Kareiva, director of the UCLA Institute of the Environment and Sustainability. “This study shows that farming fish in the ocean could play a huge role in feeding people without degrading our ocean or overfishing wild species.”

“There is a lot of space that is suitable for aquaculture, and that is not what’s going to limit its development,” said lead author Rebecca Gentry, who recently completed her Ph.D. at UC Santa Barbara’s Bren School of Environmental Science & Management. “It’s going to be other things such as governance and economics.”

According to the study, among the first global assessments of the potential for marine aquaculture, the world’s oceans are rife with aquaculture “hot spots” that provide enough space to produce 15 billion metric tons of finfish annually. That is more than 100 times the current global seafood consumption.

More realistically, the researchers note, if aquaculture were developed in only the most productive areas, the oceans could theoretically produce the same amount of seafood that the world’s wild-caught fisheries currently produce globally, but in less than 1 percent of the total ocean surface — a combined area the size of Lake Michigan.

“There are only a couple of countries that are producing the vast majority of what’s being produced right now in the oceans,” Gentry said. “We show that aquaculture could actually be spread a lot more across the world, and every coastal country has this opportunity.”

The U.S. could meet its national demand

The United States, for example, has enormous untapped potential and could produce enough farmed seafood to meet national demand using only 0.01 percent of its exclusive economic zone, Gentry noted. Given that the U.S. imports more than 90 percent of its seafood, aquaculture presents a powerful opportunity to increase domestic supply and reduce the nation’s seafood trade deficit, which now totals over $13 billion.

“Marine aquaculture provides a means and an opportunity to support both human livelihoods and economic growth, in addition to providing food security,” said co-author Ben Halpern, executive director of the UC Santa Barbara-affiliated National Center for Ecological Analysis and Synthesis (NCEAS). “It’s not a question of if aquaculture will be part of future food production but, instead, where and when. Our results help guide that trajectory.”

To determine aquaculture’s global potential, the researchers identified areas where ocean conditions are suitable enough to support farms. They used synthesized data on oceanographic parameters like ocean depth and temperature and the biological needs of 180 species of finfish and bivalve mollusks, such as oysters and mussels.

The research team ruled out places that would come into conflict with other human uses, such as high shipping zones and marine protected areas, and excluded ocean depths that exceed 200 meters, following current industry practice to keep their assessment economically realistic. Their analysis did not consider all possible political or social constraints that may limit production.

“There’s so much area available that there’s a lot of flexibility to think about how to do this in the best way for conservation, economic development and other uses,” said Gentry.

Co-author Halley Froehlich noted that aquaculture could also help make up for the limitations of wild-caught fisheries. In the past two decades, the wild-caught industry has hit a production wall, stagnating at about 90 million metric tons, with little evidence that things will pick up.

“Aquaculture is expected to increase by 39 percent in the next decade,” said Froehlich, a postdoctoral researcher at NCEAS. “Not only is this growth rate fast, but the amount of biomass aquaculture produces has already surpassed wild seafood catches and beef production.”

Froehlich emphasized that it will be crucial for science, conservation, policy and industry to work together to proactively ensure fish farms are not just well placed but also well managed, such as balancing nutrient inputs and outputs to avoid pollution and monitoring for diseases. This study is a step in that collaborative direction.

“Like any food system, aquaculture can be done poorly; we’ve seen it,” she said, referring to the boom and bust of shrimp farming in the 1990s, a fallout of poor management. “This is really an opportunity to shape the future of food for the betterment of people and the environment.”

Setting off into uncharted waters

When settling on the broad subject of the study, the research group quickly discovered that there were many questions to answer.

“We realized that there is a lack of broad-scale science looking at how aquaculture can be done sustainably,” Gentry said. “We really didn’t know where it can be done, how much it can be done.”

First, they had to rule out areas that can’t be farmed — places like shipping lanes, marine protected areas and offshore drilling sites. They looked at the physiology of 180 species being farmed and what environments are most conducive to them, combining data like ocean depth, temperature and the biological needs of species. They also ruled out places that would be impractical given current technology — the middle of the ocean might be farmable in the future, but the industry can’t do it effectively now.

With warmer waters that support more life, “tropical countries tend to have the highest production potential,” Gentry said. “These are also the places where there’s a lot of need for economic development, with food security issues looming.”

Ocean aquaculture is already the fastest-growing food sector, but a lot of work remains to reach its vast potential. There are a few difficult barriers to overcome. In some countries, including the United States, a network of regulations makes it challenging to establish even a single farming operation, the researchers said. In other places, lack of regulation leads to environmental destruction — concentrated waste from poorly managed or designed operations can severely pollute waters and coastal areas.

Also, ocean aquaculture needs to compete in the marketplace and turn a profit, and farming in the open ocean is trickier than doing so close to shore, requiring extra investment. “It takes some engineering to be able to withstand waves and currents,” Gentry said. “The offshore environment can be a pretty brutal place. Having strong infrastructure is taking some time to get going.”

Aquaculture is a tradition that stretches back to at least the fifth century B.C., when East Asian farmers raised fish in their flooded rice fields. Doing it in the ocean is a more recent development — and has mostly taken place in sheltered bays and estuaries near land. Farming close to shore is often less sustainable because it lacks deep waters to disperse the byproducts of the process and interferes with other uses like recreation.

Poorly planned farms have led to negative press, much of it well-deserved, Gentry said. Farmed fish operations have often come with environmental degradation and problems with diseases and parasites. In recent years, however, the science and industry best practices have been refined. Now it’s a matter of putting it into action in a thoughtful way that takes into account the needs of various communities.

“We need to think and be smart and put it where it should go from a production, environmental and social perspective,” Gentry said.

Still, the growing industry has massive promise. Coastal countries like Argentina, Indonesia and India have fertile seas that could feed huge populations while providing local economic benefits. Doing it sustainably will not only keep fish on the menu, it will help wild populations bounce back, improving the health of all marine life.

This research is part of the Science for Nature and People Partnership, a collaboration of NCEAS, The Nature Conservancy and the Wildlife Conservation Society.