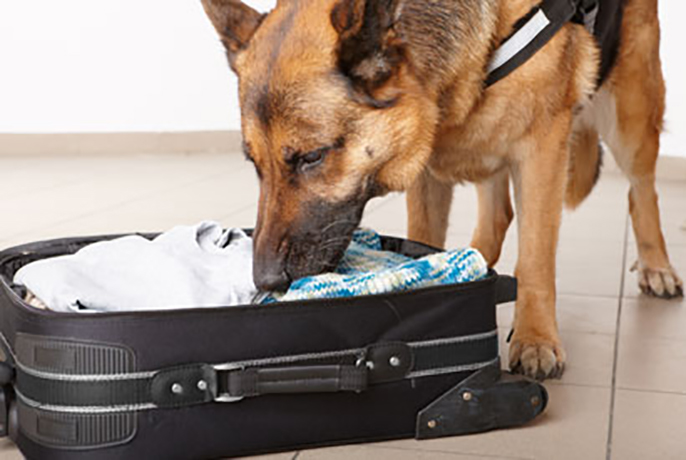 New technology under development at UC Berkeley could soon give bomb-sniffing dogs some serious competition.

A team of researchers led by Xiang Zhang, UC Berkeley professor of mechanical engineering, has found a way to dramatically increase the sensitivity of a light-based plasmon sensor to detect incredibly minute concentrations of explosives. The researchers noted that the sensor could potentially be used to sniff out a hard-to-detect explosive popular among terrorists.

The team’s findings are published Sunday ( July 20) in the advanced online publication of the journal Nature Nanotechnology.

The engineers put the sensor to the test with various explosives — 2,4-dinitrotoluene (DNT), ammonium nitrate and nitrobenzene — and found that the device successfully detected the airborne chemicals at concentrations of 0.67 parts per billion, 0.4 parts per billion and 7.2 parts per million, respectively. One part per billion would be akin to a blade of grass on a football field.

They noted that these results are much more sensitive than those published to date for other optical sensors.

“Optical explosive sensors are very sensitive and compact,” said Zhang, who is also director of the Materials Science Division at the Lawrence Berkeley National Laboratory and director of the National Science Foundation Nanoscale Science and Engineering Center at UC Berkeley. “The ability to magnify such a small trace of an explosive to create a detectable signal is a major development in plasmonsensor technology, which is one of the most powerful tools we have today.”

The new sensor could have many advantages over current bomb-screening methods.

“Bomb-sniffing dogs are expensive to train, and they can become tired,” said study co-lead author Ren-Min Ma, an assistant professor of physics at Peking University who did this work when he was a postdoctoral researcher in Zhang’s lab. “The other thing we see at airports is the use of swabs to check for explosive residue, but those have relatively low-sensitivity and require physical contact. Our technology could lead to a bomb-detecting chip for a handheld device that can detect the tiny-trace vapor in the air of the explosive’s small molecules.”

The sensor also could be developed into an alarm for unexploded land mines that otherwise are difficult to detect, the researchers said. According to the United Nations, landmines kill 15,000 to 20,000 people every year. Most of the victims are children, women and the elderly.

The nanoscale plasmon sensor used in the lab experiments is much smaller than other explosive detectors on the market. It consists of a layer of cadmium sulfide, a semiconductor, that is laid on top of a sheet of silver with a layer of magnesium fluoride in the middle.

Potential use to sense a hard-to-detect explosive

In designing the device, the researchers took advantage of the chemical makeup of many explosives, particularly nitro-compounds such as DNT and its more well-known relative, TNT. Not only do the unstable nitro groups make the chemicals more explosive, they also are characteristically electron deficient, the researchers said. This quality increases the interaction of the molecules with natural surface defects on the semiconductor. The device works by detecting the increased intensity in the light signal that occurs as a result of this interaction.

“We think that higher electron deficiency of explosives leads to a stronger interaction with the semiconductor sensor,” said study co-lead author Sadao Ota, a former Ph.D. student in Zhang’s lab who is now an assistant professor of chemistry at the University of Tokyo.

Because of this, the researchers are hopeful that their plasmon laser sensor could detect pentaerythritol tetranitrate, or PETN, an explosive compound considered a favorite of terrorists. Small amounts of it pack a powerful punch, and because it is plastic, it escapes x-ray machines when not connected to detonators. It is the explosive found in Richard Reid’s shoe bomb in 2001 and Umar Farouk Abdulmtallab’s underwear bomb in 2009.

U.S. Attorney General Eric Holder Jr. was recently quoted in news reports as having “extreme, extreme concern” about Yemeni bomb makers joining forces with Syrian militants to develop these hard-to-detect explosives, which can be hidden in cell phones and mobile devices.

“PETN has more nitro functional groups and is more electron deficient than the DNT we detected in our experiments, so the sensitivity of our device should be even higher than with DNT,” said Ma.

The sensor represents the latest milestone in surface plasmon sensor technology, which is now used in the medical field to detect biomarkers in the early stages of disease.

The ability to increase the sensitivity of optical sensors traditionally had been restricted by the diffraction limit, a limitation in fundamental physics that forces a tradeoff between how long and in how small a space the light can be trapped. By coupling electromagnetic waves with surface plasmons, the oscillating electrons found at the surface of metals, researchers were able to squeeze light into nanosized spaces, but sustaining the confined energy was challenging because light tends to dissipate at a metal’s surface.

The new device builds upon earlier work in plasmon lasers by Zhang’s lab that compensated for this light leakage by using reflectors to bounce the surface plasmons back and forth inside the sensor – similar to the way sound waves are reflected across the room in a whispering gallery – and using the optical gain from the semiconductor to amplify the light energy.

Zhang said the amplified sensor creates a much stronger signal than the passive plasmon sensors currently available, which work by detecting shifts in the wavelength of light. “The difference in intensity is similar to going from a light bulb for a table lamp to a laser pointer,” he said. “We create a sharper signal, which makes it easier to detect even smaller changes for tiny traces of explosives in the air.”

The researchers noted that the sensor could have applications beyond chemical and explosive detection, such as use in biomolecular research.