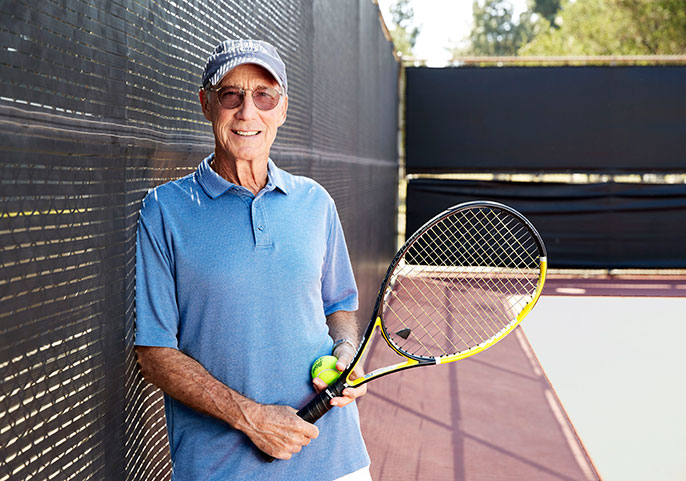 Diagnosed with metastatic melanoma, Tom Stutz had tumors in his lung, liver, spine and shoulder. Luckily, he was able to take one of the last spots in a clinical trial on an experimental medication that is based on immunotherapy. Today, he's alive and thriving, with only one shadowy spot on his lung.

Read Roan’s complete story in U Magazine and learn about other work being done on immunotherapies and other kinds of cancers.

In the spring of 2012, Tom Stutz was a man without a future. Just getting through the day took all of his energy and determination.

The retired attorney from Sherman Oaks, California, had been diagnosed with metastatic melanoma the previous year. He had tumors in his lung, liver, spine and shoulder. He could no longer walk. His wife Sophia had just died after a long illness, and Stutz, at age 71, was depressed and hopeless. Struggling to breathe, nighttime became almost unbearable.

“I had to sleep sitting up and could only get catnaps,” Stutz recalled. “I used to dread the night.”

But in the midst of this misery, Stutz had the good fortune to meet with Dr. Antoni Ribas,  professor of medicine, surgery and pharmacology at UCLA, and secure one of the last spots in a Phase 1 clinical trial on an experimental medication for advanced melanoma. The study was designed to assess the drug’s safety at various doses and look for some signs of effectiveness.

Stutz, wheelchair-bound and tethered to an oxygen tank, had tried every other available therapy, but the disease had progressed relentlessly. “I figured this was my last shot,” he recalled. “I wasn’t optimistic.”

Today, Stutz is in excellent health. He travels, plays tennis and cycles. What’s remarkable is that he’s not an exception — one of those rare cases of someone who survives seemingly terminal cancer for reasons unknown. Rather, Stutz is among a growing number of cancer patients who are being snatched from the precipice by novel immunotherapy treatments.

Immunotherapy is the catchall word for treatments that enlist the body’s own immune system to fight cancer. Unlike chemotherapy, which poisons cancer cells but also can damage healthy tissue, immunotherapies provoke the body into doing to cancer what it does naturally to viruses, bacteria and other foreign invaders: attack and destroy.

Because of its stunning success, the medication that Stutz took, pembrolizumab, received “fast-track” approval by the U.S. Food and Drug Administration last fall and now is being prescribed under the brand name Keytruda. It’s among the first in a new class of immunotherapies known as checkpoint inhibitors. Another drug, nivolumab (Opdivo), was approved by the FDA in December 2014 for metastatic melanoma and, two months later, for patients with metastatic squamous non-small-cell lung cancer. Several other drugs with similar mechanisms are in the pharmaceutical pipeline.

Pembrolizumab and nivolumab represent a jaw-dropping burst of progress in the field of cancer immunotherapy. Today, many experts believe immunotherapies will emerge as primary treatment modality for many types of cancer, perhaps, in some cases, even relegating chemotherapy to the sidelines.

“I’ve been working in the field of immunotherapy for lung cancer for 25 years,” said Dr. Steven M. Dubinett, chief of the Division of Pulmonary and Critical-care Medicine and director of UCLA’s Jonsson Comprehensive Cancer Center’s lung cancer research program. “I think we had all hoped that there would come a point where our knowledge about human immunotherapy would be sufficient to overcome critical obstacles. That has come to pass, and, although many questions remain to be addressed in further research, optimism is certainly warranted.”

The checkpoint inhibitors “have been one of the biggest stories in cancer in the last 10 years, and they are the biggest advance in cancer immunotherapy ever,” added Dr. John Timmerman, associate professor of medicine in the Division of Hematology/Oncology.

When he launched his clinical trial, Ribas was hopeful the drug would work in 10 to 15 percent of patients with advanced melanoma.

At first, Stutz concluded that the infusions of pembrolizumab he received every three weeks at UCLA weren’t working. “I got quite a lot worse,” he said. “I couldn’t turn over in bed without being out of breath,” and he had to undergo a procedure to drain fluid from his lungs.

Then, one night, one of his fitful catnaps stretched into a blissful 16 hours of uninterrupted sleep. Gradually, he found he could breathe easier. He took short walks outside his house, adding a few more steps every day. By June, he no longer needed oxygen therapy. In July, a scan showed the two main tumors in his liver and lung had shrunk by half.

Stutz continues to receive pembrolizumab infusions every three weeks. There is a shadowy spot in his lung that may be a small tumor, the remnants of a tumor or scar tissue. He doesn’t really care what it is; he’s alive and thriving, spending precious time with his children and grandchildren.

“In the beginning, I was stunned. I would say to myself: I can’t believe I’m still here,” he said. “The wonderful thing about this treatment, besides the result, is you can live pretty much a normal life. The side effects are minimal.”

Ribas’ clinical-trial data, published in the July 2013 issue of the New England Journal of Medicine, showed that one-third of patients with advanced melanoma experienced long-term responses to pembrolizumab. Another third had some tumor shrinkage, but the disease eventually progressed. Only 12 percent of patients had a significant side effect, such as fatigue or joint pain.

“I honestly didn’t think it would work this well,” Ribas said. “When we started the clinical trial, sometimes we tried to select patients whom we thought would be more likely to benefit. Then we started giving it to patients with more aggressive metastatic melanoma, even patients who were at the limit of eligibility for the clinical trial, where a day or two more and they wouldn’t have been eligible. Some of those patients responded. Those were patients where, if we didn’t do anything, life expectancy would have been weeks.”

The therapy also appears to attack cancers that have spread throughout the body, including the brain. “If you get an immunotherapy that works really well, it can work all over,” Ribas noted.

Now, similarly stunning results are being seen with other checkpoint inhibitors and in other types of cancer. Thirty-two percent of melanoma patients receiving nivolumab experienced a reduction in tumor size, and more than one-third had an effect that lasted for more than six months. In people with advanced squamous non-small-cell lung cancer, nivolumab produced tumor shrinkage or the complete disappearance of the tumor in 15 percent of patients, many with long-lasting results.

In a highly anticipated presentation in April at the American Association for Cancer Research annual meeting in Philadelphia, UCLA researchers reported evidence of positive responses to pembrolizumab in about 20 percent of patients with non-small-cell lung cancer. The study will be published in the New England Journal of Medicine.

“These results have the potential to very substantively change the way that lung cancer is treated,” said Dr. Edward B. Garon, director of the thoracic oncology program at UCLA, who presented the data. “The prolonged duration of the response with this class of drugs has been particularly appealing to patients. It’s quite exciting.”