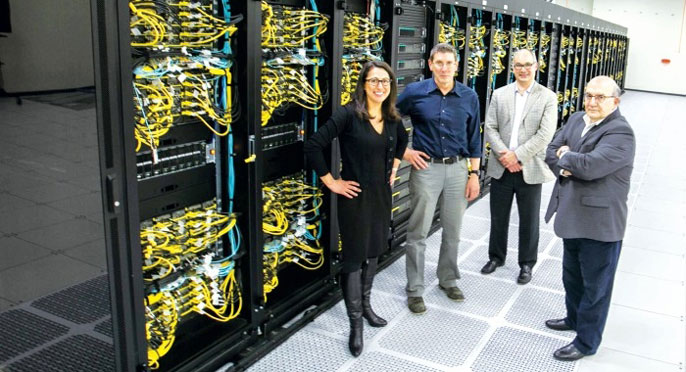 The nation’s most advanced supercomputing capabilities will soon be unleashed in a quest to dramatically accelerate the development of new, personalized cancer therapies.

University of California researchers, affiliated national laboratory scientists and industry experts have teamed up on an effort that could revolutionize the drug discovery process by tapping into the power of high-performance computing and deep machine learning to more quickly and accurately predict promising cancer treatments.

Known as ATOM — Accelerating Therapeutics for Opportunities in Medicine — the public-private effort leverages UC’s partnership with Lawrence Livermore National Laboratory with the goal of speeding the development of cancer drugs that are ready for patient testing within a single year from initial discovery. That process now takes roughly five to 10 years.

Drug discovery is not only slow, but also costly and prone to failure: Just 12 percent of new drugs succeed during clinical trials, said Jim Brase, Lawrence Livermore National Laboratory’s deputy associate director for computation, one of the ATOM project leads. Predictive simulations could be a real game changer, allowing researchers to quickly vet millions of molecules for their potential therapeutic efficacies.

“We have a bold goal of moving from a molecule target to human trials within one year,” Brase said.

The project — part of the national Cancer Moonshot — is getting off the ground with $3 million in funding from UC for a three-year proof-of-concept project housed at UC San Francisco’s Mission Bay campus. The National Cancer Institute and GlaxoSmithKline are also partnering on the project.

UC has made a major investment in the ATOM program in recognition of its huge potential to change how we combat cancer, Brase said.

As part of its public service mission of managing the UC-affiliated Department of Energy national laboratories, UC funds ambitious, interdisciplinary partnerships like ATOM using a portion of the fees that it collects from DOE for its management oversight of the labs. These research partnerships bring UC and its national labs together on projects that further national security goals, said Kimberly Budil, UC’s vice president for national laboratories.

Since 2008, the UC National Laboratory Fees Research Program has awarded more than $122 million in collaborative research and training grants that benefit both the university and its labs. These partnerships have produced roughly 1,000 peer-reviewed papers and provided research support to more than 300 UC faculty and lab scientists, 100 postdoctoral scholars and 330 graduate students.

“This UC program has reinvested a substantial portion of the income received from managing the national security labs back into research and training, creating a pipeline of skilled researchers for the national labs and long-lasting academic partnerships,” Budil said.

It’s a highly successful model. UC faculty, postdoctoral scholars and graduate students gain access to the labs’ specialized facilities, equipment and expertise, and in return, the lab is able to develop its next generation of researchers and scientists.

Arthur Ellis, UC’s vice president for research and graduate studies, co-hosted a symposium with Budil in late September that showcased the potential and mutual benefit of these strategic research partnerships to UC and its national labs.

Presentations included biomedical and health science projects like ATOM, along with collaborative research and training programs in other areas of high importance to national security, including mesoscale materials science and high energy density science.

As Livermore celebrates its 65th anniversary, it’s important to remember that UC has been a partner to the national labs since the very beginning, said Bill Goldstein, director of Livermore Lab.

“The fee program is one more manifestation of that close engagement,” Goldstein said. “The university ethos, spirit and mission have always suffused the labs. That partnership brings and sustains innovation and engenders a pipeline of postdocs, students and interns, and ultimately, lab staff who service our country’s national security goals.”