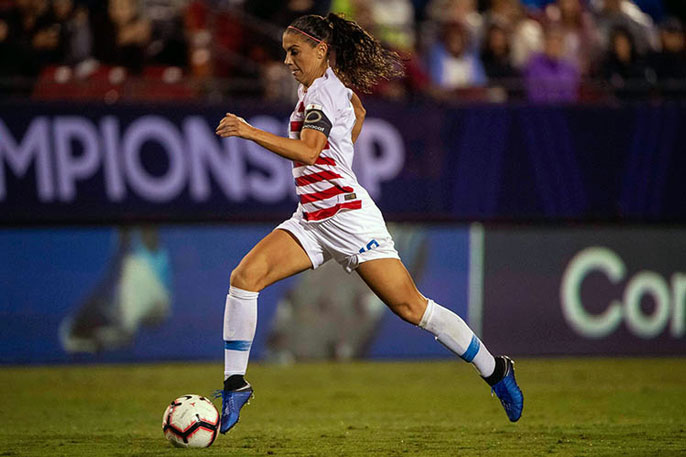 Alex Morgan, who started her legendary career at UC Berkeley, is leading Team USA into the World Cup while at the same time pushing for gender equity in the sport.

UC players in the World Cup

As former and current UC Berkeley soccer stars Betsy Hassett, Daisy Cleverley, Miranda Nild and Alex Morgan line up today at the Women’s World Cup, they will be wearing different uniforms. But they’ve got a common goal: ending gender discrimination in the sport.

Morgan, who became a major figure in women’s soccer as part of the American team that brought home gold in the 2012 London Olympic Games, is the reigning U.S. women’s soccer player of the year.

Since then, she’s used her celebrity on the global stage to speak out against inequality. On March 8, International Women’s Day, the team filed a federal gender-discrimination lawsuit against the sport’s governing body in the United States, the U.S. Soccer Federation.

Morgan’s name was listed first in the lawsuit, which was filed to address pay discrepancies between the men’s and women’s teams. In the lawsuit the claim is made that from 2013-16 while the women’s team earned more for U.S. Soccer than did the men, men’s team players earned an average of $263,320 while women were earning a maximum of $99,000.

The lawsuit is creating echoes around the world. The Australian players’ union is pressing for more equitable prize money, and Norway’s Ada Hegerberg, the first-ever female winner of the Ballon d’Or as the outstanding player in the women’s game, is sitting out the World Cup over what she sees as the uneven pace of progress in the women’s game, including pay.

“I’m feeling the momentum and the hype,” New Zealand midfielder Cleverley says. “It’s important to be part of the discourse around women’s pay in the game. It’s driving the game forward.

“Alex is an amazing player with incredible pace. She’s hard to defend, she has a lethal left foot, and she has the consistency that great players have. And she’s speaking out on our behalf, too.”

Nild, who like Cleverley played for UC Berkeley this past season, is a forward for Thailand playing under her given name, Suchawadee Nildhamrong.

“I think all of us, at some level, are thinking about a balance between men’s football and women’s football,” Nild says. “Alex is leading the way. And it could be very important for the sport. If we get that equity, it would entice more girls to play soccer throughout the country.

“And if the U.S. is able to make that platform equal, it’s the kind of thing that could spread around the world. It takes name recognition, and Alex has that. Once she spoke out, I’ve heard a lot more talk about it everywhere in soccer.”

Morgan, who played for UC Berkeley coach Neil McGuire from 2007-10, has support throughout the soccer community. McGuire says that, even a decade later, some of the soccer recruits that UC Berkeley now gets “come here because they want to emulate Alex.”

LUNA Bar, a company that makes a nutrition bar that targets women athletes, has pledged to step up as part of its “Someday Is Now” campaign. The company will pay each of the 23 U.S. women who made the World Cup Team $31,250 — the difference between what the U.S. Soccer Federation pays the members of the men’s team and the women’s team.

As Morgan told Time recently, “Eventually, you just have to take a stand. How come we’ve had to fight this whole time, year after year?”

As for back in 1995, nine members of the women’s national team boycotted the Olympic training camp over money issues. In 2015, the team joined players from other nationals to final a gender discrimination lawsuit against world soccer’s governing body, FIFA and the Canadian Soccer Association. That suit, in part, was over games being played on artificial surfaces, Men’s teams weren’t asked to play on those surfaces because of the increased chance of injury. The players didn’t win that time around, but all games this year will be played on grass.

Of the four Berkeley women playing in this World Cup, Morgan is the only one with a realistic opportunity to bring home gold with Team USA. Oddsmakers have the top-ranked Americans as 7-4 favorites to take home the title, just ahead of the host and fourth-ranked French, at 7-2.

Hassett, a 28-year-old midfielder whose time at UC Berkeley (2009-12) overlapped with Morgan’s, is optimistic about advance and says “the best years of my career were at Berkeley. It taught me just how to prepare for the World Cup.” Even so, oddsmakers see New Zealand, the world’s 19th-ranked team, as 150-1 to win it all.

For the most part all eyes will be on Morgan and top-ranked Team USA. What she and her teammates do on field will be

“Mostly what I know about Alex is what I’ve seen of her playing on TV,” Nild says. “She’s very speedy, accurate and powerful, and that’s a pretty impossible trio. I met her in person once two years ago when she came by because the U.S. team was playing in San Jose. And now she’s speaking for everybody.”

Morgan, 29, and Team USA are playing with the world title on the line in France. She will be in the spotlight like never before, even for someone who has more than 3.5 million Twitter followers, 5 million followers on Instagram and who will be seen in ads for Coca-Cola, Nike and Secret deodorant. The fight for gender equity will follow her every move on the field.

So, no pressure, right?

“If we do our jobs,” Morgan told Time recently, “people will be captivated. This can be something greater and bigger than there’s ever been before.”