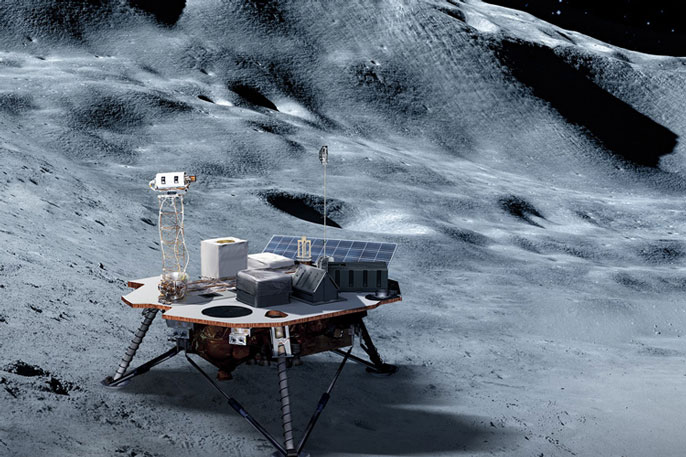 Commercial landers like this will carry science and technology payloads, including one built by UC Berkeley, to the lunar surface, paving the way for NASA astronauts to land on the Moon by 2024.

Scavenging spare parts and grabbing off-the-shelf hardware, University of California, Berkeley, space scientists are in a sprint to build scientific instruments that will land on the moon in a mere two years.

NASA announced on July 1 that it has selected 12 scientific payloads to fly aboard three lunar landing missions within the next few years. One of them will be the Lunar Surface Electromagnetics Experiment (LuSEE), which will be built under the direction of Stuart Bale, a UC Berkeley professor of physics and a veteran of several past NASA missions, including the Parker Solar Probe that was launched last August.

The science and technology experiments will explore the moon’s surface environment in advance of upcoming human missions and are part of NASA’s collaboration with commercial partners to launch payloads — and, by 2024, humans — to the moon.

Bale and his colleagues at UC Berkeley’s Space Sciences Laboratory have less than $6 million to cover the costs, which means they will be co-opting spare parts originally built for the Parker Solar Probe and other spacecraft, including STEREO, which launched in 2006 and is still providing stereo views of the sun, and the 2013 MAVEN on a mission to Mars. The LuSEE will make comprehensive measurements of electromagnetic phenomena on the surface of the moon and erect a simple radio telescope — the first operational telescope on the moon.

“NASA wanted instruments that are ready to go, because the schedule is really aggressive. We are talking about pulling something together and delivering it in about 18 months, which is fast,” Bale said. “We proposed a re-flight of our Parker Solar Probe instrumentation, which works like a charm, and the team is still together to get it tuned up. We’re good at building experiments quickly and that work.”

“Berkeley is going to put an experiment on the surface of the moon,” Bale added. “That is pretty cool, I think.”

The experiment is not expected to last longer than one lunar day — about two weeks — because the batteries will discharge during the two weeks of night. But Bale is hoping it will survive the lunar darkness and live to observe another lunar day.

“The thermal environment is really nasty on the dark side, so we will land at morning, when the sun comes up on the moon, spend two weeks — one lunar daylight — observing like crazy, and when it becomes night, the lander goes into the dark and the batteries will run down because there is no solar input to recharge them. They are not required to wake up on the other side.”

The missions are part of NASA’s Commercial Lunar Payload Services program, which on May 31 commissioned three upstart companies to build lunar landers to return NASA to the moon 50 years after America last landed a spacecraft there: the Apollo 17 manned mission in 1972. These landers will carry the 12 payloads, seven of which will focus on answering questions in planetary science and heliophysics, and five on demonstrating new technologies.

“These new lunar payloads represent cutting-edge innovations that will help us get to know the moon as we never have before, as we prepare to land humans on the moon and, eventually, Mars,” said Thomas Zurbuchen, associate administrator of the agency’s science mission directorate in Washington, D.C. “Each one brings something new to the moon and can take advantage of early flights through our commercial partnership program.”

One of the three landers will carry LuSEE, which will measure the moon’s fluctuating magnetic field and the dust kicked up by light and electrons coming from the sun.

Dust could be a big problem for future moon colonists, Bale said. Harrison Schmitt, who crewed Apollo 17, suffered an allergic reaction to moon dust, as did a doctor who unloaded Schmitt’s spacesuit upon return to Earth. The fine dust was also a nuisance inside the Apollo landers, because it is electrically charged and sticks to everything.

The moon’s surface is electrostatically charged, too, which could cause problems for structures and humans on the moon. Apollo astronauts saw fountains of dust thrown into the air at the day-night boundary of the moon, presumably because of voltage differences between the lit and unlit portions of the moon. The voltage differences can also charge up objects on the surface, leading to sparking.

Bale is interested in how the electrostatic environment on the surface changes as the sun moves across the sky and how that changing electrostatic environment affects the dust. Magnetometers on board will measure changes in the magnetic field, which have to date only been measured indirectly by spacecraft orbiting the moon, using instruments built at the Space Sciences Laboratory.

The LuSEE will also carry the first U.S. radio telescope on the moon, a simple dipole antenna that is like a rabbit-ear TV antenna. The antenna will be identical to the one aboard the Parker Solar Probe, which so far has been able to record radio emissions from the Milky Way Galaxy in frequency ranges not possible to detect on Earth, because such wavelengths are blocked by ions in the atmosphere.

“I am sure we will see the sun — solar flares, type 3 radio storms, coronal mass ejections — but also Jupiter and other planets, which we already see with the solar probe,” Bale said. “And we will see a lot of emissions from Earth. We propose to do a survey of the radio environment on the surface of the moon in preparation, someday, for a more advanced radio telescope.”

Such a solar array on the moon could answer questions about the early history of the universe, including the “epoch of reionization,” when the first stars began to form in the universe, about 400 million years after the Big Bang.