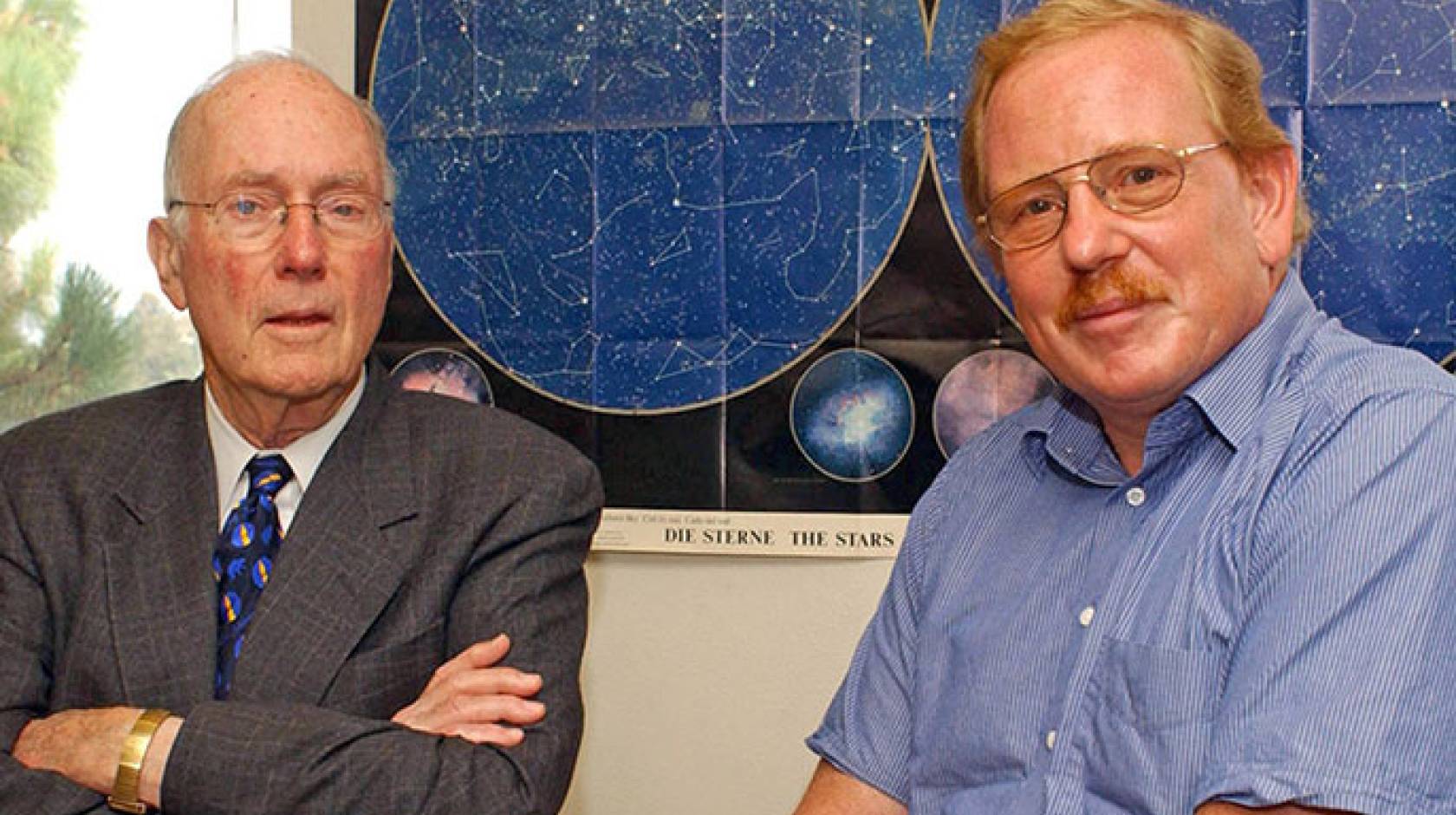 Credit: UC Berkeley
In 2003, Nobel laureate Reinhard Genzel, right, posed with his mentor, Charles Townes, who won a Nobel Prize in physics for invention of the laser. Townes, who died in 2015, and Genzel collaborated on some of the first observations of the galactic center, later shown by Genzel and Nobel co-winner Andrea Ghez to host a supermassive black hole.

Huge leaps in technology allowed Reinhard Genzel to probe stars zipping around the center of the Milky Way galaxy 25,000 light years away, eventually earning him a portion of today’s 2020 Nobel Prize in physics. But later in the day, Zoom technology proved too balky to bridge the gap between the physicist, currently in Munich, and his fans in Berkeley.

Nevertheless, Genzel’s voice was patched in to a group of some 175 colleagues and students eager to hear from the newest UC Berkeley Nobel laureate and to learn about the steps along the way to his discovery and that of co-winner Andrea Ghez of UCLA: A black hole sits at the center of our galaxy.

Genzel, a UC Berkeley professor emeritus of physics and astronomy, as well as director of the Max Planck Institute for Extraterrestrial Physics in Germany, credited the late UC Berkeley Nobel laureate Charles Townes for initiating the studies that led to the discovery. Decades ago, Townes, the inventor of the maser and laser, desperately wanted to use infrared detectors to study the center of the galaxy, which some astronomers thought might host an unseen and very large black hole.

Yet, Genzel said, the technology was not up to it then.

“Charlie Townes’ dream was to do this experiment we have done, already in the 1970s,” he said. “And he, in fact, did these fantastic, pioneering experiments. But (when he saw) the results, he knew he would never get to the galactic center, which was a real disappointment to him.”

It was up to Genzel, Townes’ postdoctoral fellow, to create a team to improve detectors one hundred thousandfold to be able to track stars with such precision that they could essentially measure the concentration of mass in the galactic center.

“I was very pleased that I got mails from all four of Townes’ daughters,” he said. “That is very important to me, because they appreciate where it all comes from. Berkeley has played a big role in this.”

“You worked with our late, great Charlie Townes, also a Nobel laureate. I cannot imagine a more profound academic lineage than that, and I thank you for passing along your knowledge to generations of students and collaborators here at Berkeley,” Chancellor Carol Christ said to Genzel, in her welcoming remarks.

Genzel’s research group, working with an adaptive optics system to sharpen images from the Very Large Telescope array in Chile, and Ghez’s group, using equivalent adaptive optics with the Keck I and II telescopes in Hawaii, ran neck and neck for decades, each spurring the other to greater precision and, eventually, to certainty that the heavy object at the galactic center could be nothing other than a supermassive black hole, some 4 million times more massive than our sun.

“I very much appreciated the competition,” Genzel said. “It was like we were both artists, … and the scientific audience was in a perfect position to see us perform the same exercise and then judge whether the outcome was the same. And so, when the two teams would agree, the audience would believe what we have. It was initially very much of an advantage.”

Ghez’s team welcomed the competition, as well, said Jessica Lu, a UC Berkeley associate professor of astronomy who has been part of Ghez’s team studying the galactic center since her days as a UCLA graduate student in 2003.

“That spirit of competition really led us all to be better,” she said.

“When I joined Andrea’s group, the suspicion that there was a supermassive black hole (at the center of the galaxy) was very strong, and there was some observational evidence,” she added. “But many still speculated that it was a swarm of dark stars or quark stars or something else exotic. We fought to prove every alternative scenario wrong, and showed that the stars had to be orbiting a supermassive black hole.

“To have a role model like Andrea to pave the way, and a friendly competitor like Reinhard to really inspire us to have great conversations and great ideas and innovations around the technology and methods and the science itself, was a real pleasure.”

Said Genzel, “It was quite a trip. A long one, but a good one. And I think we are not done yet.”

“The discovery of the Milky Way’s supermassive black hole was the first, but not the last, at the galactic center.” she said. “It opened the window to new and interesting insights about our own galactic center and galactic centers across the universe. We found that stars can be born in their immediate vicinity, right around the black hole, even though it is an extreme environment and there are strong tidal forces.”

While continuing their studies, Genzel and Ghez are also passing the torch to younger scientists, like Lu, who in the future will have even larger telescopes — three 30-meter-class telescopes are currently being built — to observe the galactic center.

“I think this Nobel Prize is a special one, in that is awarded both to astrophysics, for gravity and black hole studies, and to the first female astronomer that has ever been awarded a Nobel Prize,“ Lu said.

For the moment, Nobel laureate George Smoot advised, Genzel should “relax. Hopefully soon, you will go home to rest, because I know how hard it is for the first few weeks. You should tell people it is not exactly trivial, what you end up going through.”

Genzel regretted that he could not fly out to meet and reminisce with UC Berkeley colleagues. But when he can return to California, he will receive something that makes Nobelists the envy of everyone on the UC Berkeley campus: a free parking space.

“It is at this point in the ceremony that I would present you the most prized of Berkeley perks, a Nobel laureate parking spot,” Christ quipped, in her remarks. “I hope that, when things are back to normal, you will visit, and you’ll park your car. And thank you for showing the world that Berkeley is one of the best places to study in the universe.” 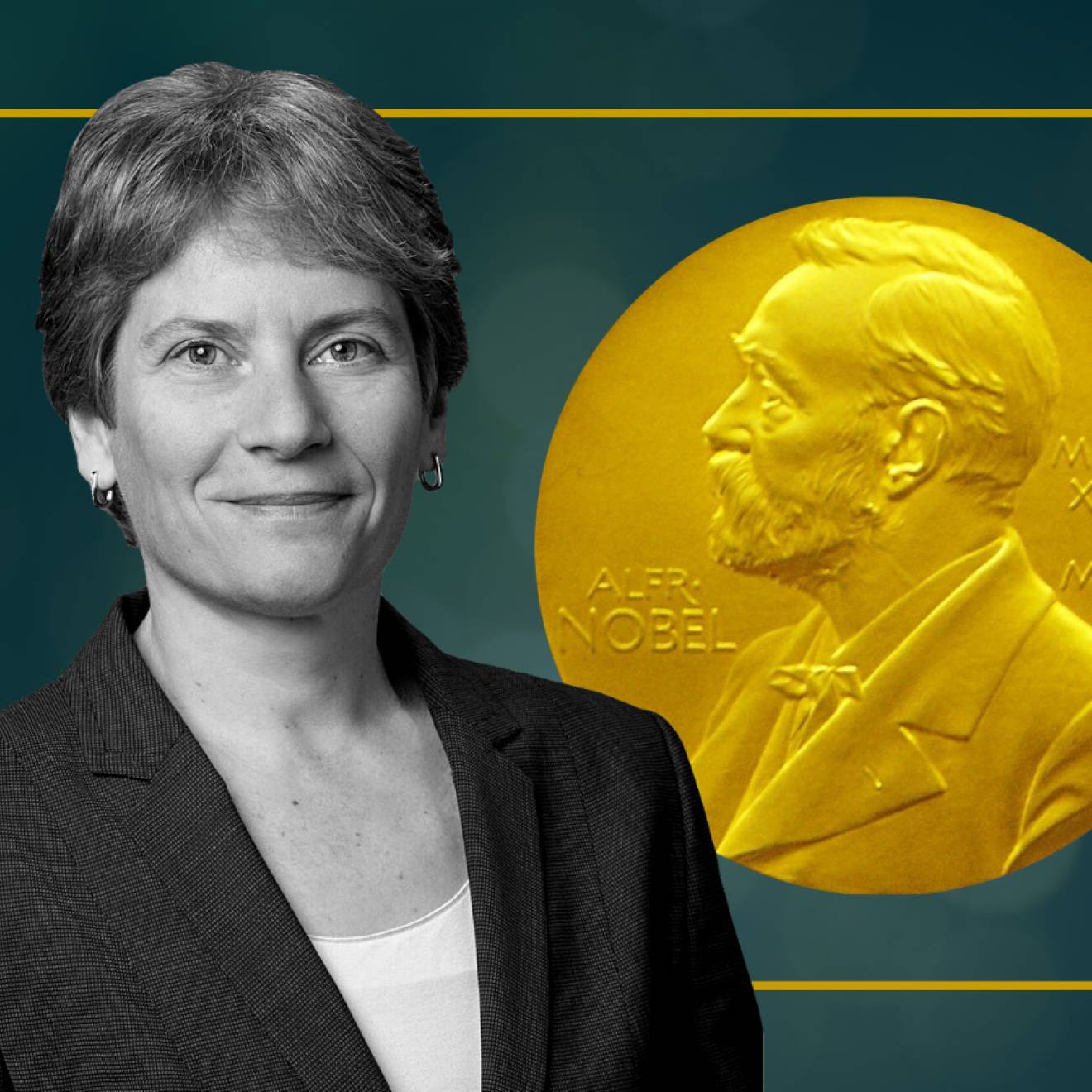 This year, the winners in physiology or medicine, physics and chemistry all share one important distinction: important foundational time spent at UC, a cradle of inventiveness, experimentation and…