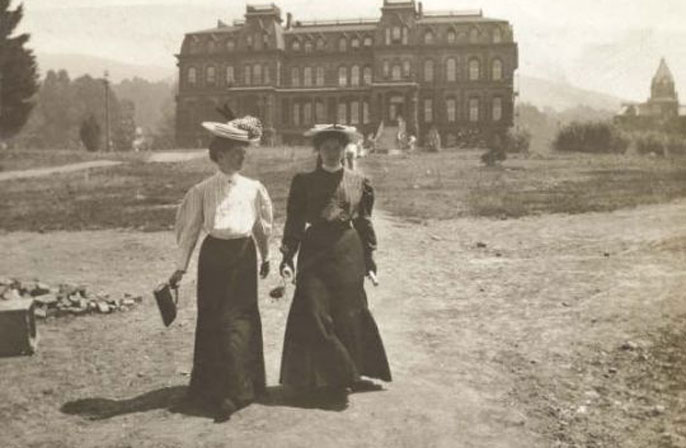 Female students approaching the east entrance of California Hall with North Hall and the future site of Doe Library in the background, 1906. Women began to be admitted into UC only two years into its history, in 1870.

The University of California began 150 years ago on a simple, but revolutionary idea: that college should be available to everyone.

That bold, forward-looking spirit has stayed with the University of California ever since. Just two years after it was created in 1868, the UC Board of Regents decreed that women would be admitted equally with men.

For a perspective on just how advanced that was, consider that women didn’t earn the right to vote for another 50 years, and it was longer still before women were admitted to many of the Ivy League schools.

Much of UC history, in fact, has been about pushing boundaries, pioneering new ways of doing things and expanding educational and economic opportunities — not bad for an institution that started out in temporary buildings, with just 40 students and 10 faculty members.

That rich history is captured in a new digital timeline, created in honor of UC’s 150th anniversary. It shows how far the university has come since its earliest days, and details its role in pivotal moments like World War II, the Free Speech Movement and the birth of the biotech industry.

“Californians should feel tremendously proud of their public research university and all that it has accomplished over the last 150 years,” said UC President Janet Napolitano. “Since the very beginning, UC has done more than just help California prepare for the future — we’ve helped create it. And we have no intention of slowing down now.”

Today, UC enrolls 273,000 students across its 10 campuses, conducts one-tenth of all academic research in the nation, and oversees five top-ranked medical centers that provide care to more than 4.5 million people a year.

The last century and a half has seen UC and California grow up together. Today the Golden State has become the world’s sixth largest economy and is renowned for the same hallmarks that set UC apart: innovation, cultural creativity and a penchant for dreaming up the future.

The two entities are so inextricably entwined that writer Joan Didion, a Berkeley alum, called the university, “California's highest, most articulate idea of itself, the most coherent, perhaps the only coherent expression, of the California possibility.”

The state was less than 20 years old when Gov. Henry Haight signed the act that created the University of California.

At the time, college was usually reserved for the elite few, but lawmakers believed that their young state deserved an excellent public university, a place that would be open not just to the wealthy, but to the children of farmers and other working people.

Of all the enduring legacies, that egalitarian ideal remains at the heart of UC today. The university now enrolls more Californians than at any time in its history, with 38 percent of its undergraduates from low-income families and 42 percent among the first in their families to attend college.

In many ways, it’s proof of a promise kept — one that UC leaders are committed to preserving and protecting for the future.

“This pivotal milestone is much more than an occasion to celebrate the founding of our great university,” said UC Board of Regents Chair George Kieffer. “It is a testament to the enduring and far-reaching value of the University of California to our state, nation and world. UC’s mission of education, research and public service is more vital than ever to meeting society’s challenges today and over the course of the next 150 years.”