This report on UC's per-student expenditures includes data on social mobility, graduation rates, degrees in STEM fields, global and national rankings, and contributions to California's workforce, economy and health care. See details at the end of this article.

The cost to provide a University of California education is lower today than it was two decades ago, a result of educational efficiencies made by UC in response to reduced state funding.

That's the conclusion of a report to state lawmakers, which details the university's costs, on a per student basis, for undergraduate and graduate instruction and research.

"As the state's contributions to UC have diminished, we've become more efficient at how we deliver a world-class education," said UC Chief Financial Officer Nathan Brostrom. "Some of those efficiencies have brought improvements to UC operations, but not all of them are positive."

Student-faculty ratios have risen, for example. Faced with tight budgets, campuses have deferred faculty hiring, with 2011-12 and 2012-13 marking the first time in UC history that more faculty separated from the university than were hired.

Meanwhile, UC has continued to increase enrollment in response to California demand. The result has been a slow upward creep in the student-faculty ratio, Brostrom said.

The other big impact from reduced state funding has been on students.

"Students are paying a significantly larger portion of the cost through tuition, even though the overall education expenditure has gone down," Brostrom said.

"UC is one of the best investments the state can make in its people and its economy, but it needs additional state resources if it is to remain affordable, accessible and of the same high quality that it is today."

UC produced the expenditure report in response to a new state mandate that requires that UC, California State University and California Community College system to delineate their educational expenditures by student level and discipline.

The university had been providing the legislature each year with a report on its average expenditures for instruction. That report used a methodology that aligned with how UC is funded, and which had been developed by UC, CSU, and CCC, the California Postsecondary Education Commission.

UC's budget office had to develop new methodologies to meet the reporting requirements. Brostrom cautioned that there are inherent limitations to the data, given UC's complexity and the decentralization of its 10 campuses.

"Instruction, research and public service are inextricably tied together at UC, and all are an important part of the educational experience," Brostrom said. "Faculty often teach courses and conduct research at both the graduate and undergraduate level, for instance."

That commonplace scenario makes it extremely difficult to disaggregate costs between undergraduate and graduate instruction, he said.

The state used to fund UC on a per student basis. That practice ended in the 1990s when the state began allocating UC funds on an average student basis, using a single number for both undergraduate and graduate students. UC's cost reporting methodology followed suit.

University officials say that using a cost-averaging method gives a more realistic picture, given how entwined research is to the educational experience at UC for both graduate and undergraduate students.

UC surveys its undergraduates every two years to ask them about their UC experience. In its most recent survey, 85 percent of respondents said that attending a university with world-class researchers was important to them; and 60 percent of senior undergraduates had participated in research activities as part of their coursework.

"Students come to UC to learn from and work alongside faculty who are leaders in their academic discipline," Brostrom said. "It's a hallmark of what makes UC unique among the state's system of higher education." 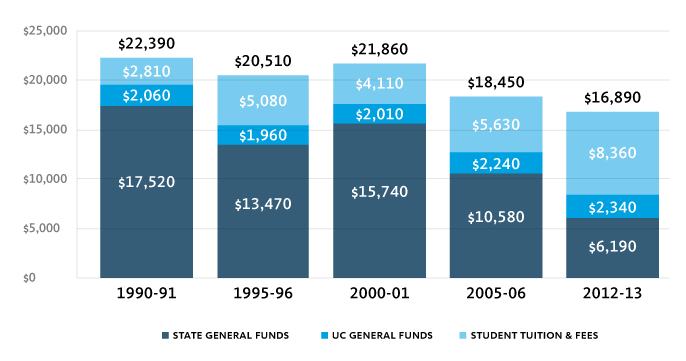