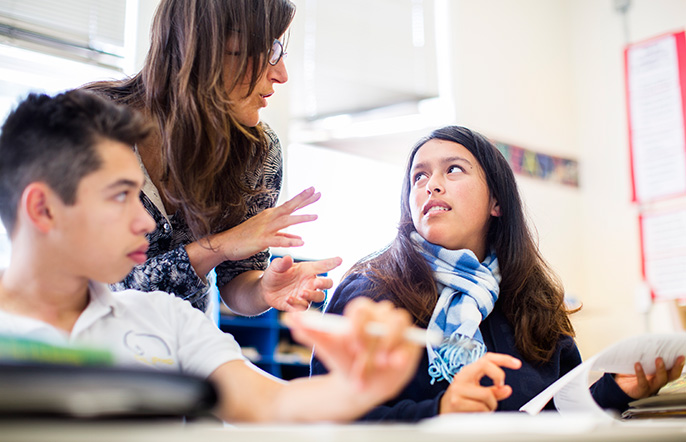 Educators interested in learning more about and applying for TES can visit the Transcript Evaluation Service site, call (510) 987-9491 or email tes@ucop.edu.

This fall, thousands of California high school students will receive a new kind of report card — a specialized transcript that shows them how to achieve eligibility for the state’s public universities.

The transcript evaluates exactly where a student stands in terms of grade point average and course requirements for admission to UC or a California State University campus. And it provides a personalized road map of how to achieve eligibility.

Roughly 80 public high schools use the Transcript Evaluation Service now. But it has proved so successful in boosting college eligibility rates that UC is expanding it to as many as 500 schools this fall, with the goal of reaching 1,800 schools by 2018.

UC analyzed data from schools that had used the service for three years and found that completion of course requirements had jumped by 38 percent, and 21 percent more students were eligible to attend the University of California.

"TES helps to identify those students that are right there: who are just short of the finish line and don’t realize it,” said Reginald Hillmon, director of college access and preparation at UC Office of the President.

The transcripts have enabled students who didn’t think of themselves as college material to see a four-year education within their reach, said Hillmon. They also help counselors identify students with the ability to excel, so they can push them to take the courses that will make them competitive candidates for UC.

Now, with a new technology platform that makes it possible to process student data faster and on a much larger scale, UC is scaling up the program from one that served a select number of high-need, low-resource schools to one that administrators can offer statewide. UC officials are reaching out to high schools, especially those in communities that are low-income or have low college-going rates, and encouraging them to sign up for the program.

“We want every school to be using it, so every California student has access to a UC-evaluated transcript that is credible,” Hillmon said.

A tool for overtaxed guidance counselors

High school guidance counselors in California maintain average caseloads of more than 1,000 students — twice the national average and the highest caseload in the nation. As a result, counselors often focus on students in danger of dropping out or those who are star students eligible for prestigious schools and awards, said Vanessa Goulart Agredano, an academic counselor in the San Jose Unified School District, where there is one counselor for every 1,500 to 1,800 students.  It is those students in the middle of the road academically who are especially likely to be overlooked, she said.

“We may have students that are definitely on track for college in terms of their grades, but they are two or three classes short of meeting requirements,” Agredano said. TES, which the district has been using since 2006, has been essential in supporting those kids, with both one-on-one and programmatic resources.

Less than half of students complete college-going requirements, but the San Jose district has recently launched a major effort to improve those statistics.

“A lot of students struggle with geometry. So we can see that, and decide — can we offer it over the summer, and target exactly those students who are really close to meeting the benchmarks? And can we support them with extra resources that can get them over that hump?” Agredano said.

Increasing college eligibility by 50 percent in a single year

TES doesn’t help just individual students. It has lifted entire schools and districts by helping them identify scheduling and administrative issues that can serve as barriers to college access.

One large district, for example, was able to use TES data to zero in on the fact that many of their students did not complete college math requirements because there were too few teachers offering geometry.

“It was astounding,” Hillmon said. “There was this one course bottleneck that was having a huge impact on all these students and their futures. Once administrators had the data to illuminate and fix the problem, they saw an almost immediate change.”

For teenagers, who are often living in the moment, having a personalized roadmap to college can give them an essential nudge to start planning for what’s next.

After reviewing their TES transcript, advisers say they’ve seen students change their entire vision for their future: studying for and taking the SAT, completing a-g requirements, and applying to college or starting community college on a transfer path.

“When students hear this comes from the University of California, it gets a big reaction,” said Agredano. The fact that that someone has taken the time to look at their record and give specific recommendations means something, she said. “It becomes a big motivator to get to that next level.”