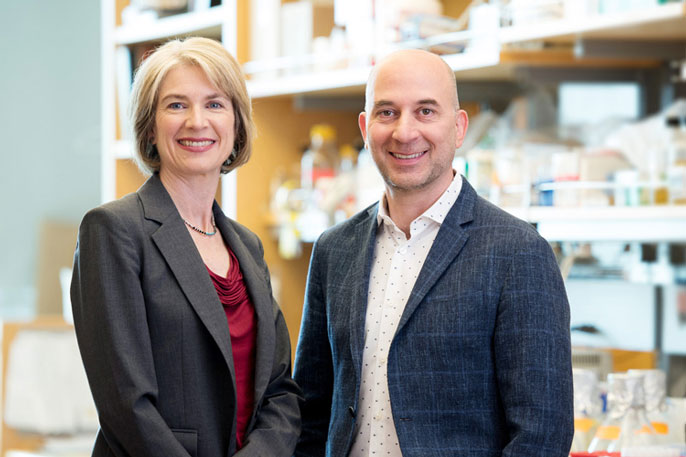 Jennifer Doudna of UC Berkeley and Jonathan Weissman of UCSF are two high-profile scientists who have resigned from Cell Press editorial boards until the publisher, Elsevier, resumes negotiations with UC over access to journal articles.

A group of prominent University of California faculty say they will step away from the editorial boards of scientific journals published by Elsevier until the publishing giant agrees to restart negotiations, which stalled in February and left the 10-campus system without subscriptions to some of the world’s top scholarly journals.

A letter circulating since July 12 throughout the UC system and already signed by 30 faculty from four UC campuses warns Elsevier that the signatories will suspend their services on editorial boards of the 28 Cell Press journals, which are among the premier journals in the field of biology and Elsevier’s flagship publications. About one-third of all UC Berkeley scientists who serve on editorial boards for Cell Press have signed the letter.

This would deny Elsevier’s Cell Press journals what they have always gotten for free: prestige names on their editorial boards and guaranteed peer review.

Other grassroots efforts have been initiated by UC professors. An open letter to Elsevier urging it to reconsider its decision has garnered nearly 170 signatures from around the world since March from members of Elsevier editorial boards. A second petition has been signed by nearly 1,000 people worldwide who agreed to boycott Elsevier journals — by refusing to submit or review papers or to participate on editorial boards — if the publisher does not agree to UC’s terms.

The new petition, however, is from UC professors only, and it would sever ties to editorial boards by some powerhouse scientists, including UC Berkeley’s Jennifer Doudna, co-inventor of the CRISPR-Cas9 technology to manipulate genes; UCSF’s Elizabeth Blackburn, co-recipient of the 2009 Nobel Prize in Physiology or Medicine; and UCLA’s Stephen Smale, vice dean for research of the David Geffen School of Medicine. A survey of the editorial boards of all Elsevier journals turned up more than 1,000 UC faculty members, more than 110 of whom provide their services to Cell Press journals.

The letter reads, “Pending the signing of a new contract with UC, we wish to inform you that we are suspending our editorial services to Cell Press journals. We very much hope to hear of an appropriate resolution and resume our productive relationships with Cell Press.”

“This is a way of drawing attention to the issue,” said Matthew Welch, a UC Berkeley professor of molecular and cell biology who helped draft the letter. He is on the editorial board of the lead Cell Press journal, Cell.

“This is not going to affect the day-to-day operation of the journals in a tangible way,” he added, “but it would send a message to the journals that we don’t have to participate in this process if the university is unable to successfully negotiate with them in good faith. We have lots of other choices, as far as where we exert our efforts and submit our papers.”

The UC, which had been paying Elsevier $11 million yearly for access to some 2,000 of the publishing company’s more than 2,500 scholarly journals, tried to negotiate a new deal before its five-year agreement expired Dec. 31. But Elsevier was unwilling to agree to UC’s main requirement: universal open access publishing at a reasonable price, so that taxpayer-funded research conducted at the 10 campuses would be freely available to everyone in the world.

“I think (this letter) can actually be quite influential,” said UC Berkeley Librarian Jeffrey MacKie-Mason, co-chair of the systemwide team negotiating with Elsevier. “We are a big customer of Elsevier’s, and that is part of our leverage in negotiations as a university. But the single most important thing that Elsevier has is faculty talent: faculty who write articles and submit them, faculty who review articles and faculty who are on the editorial boards and do the editing. Without that, Elsevier has very little.”

Journals invite well-known scientists to join editorial boards as unpaid advisers, which is a plum for the scientists, but also a marketing strategy for the journals, adding prestige and also guaranteeing that the board member will regularly review papers submitted to the journal. Cell has 109 researchers on its editorial board, including two UC Berkeley faculty who signed the letter — Welch and James Hurley, a professor of molecular and cell biology.

“The goal of this is to get a deal through. We are not trying to permanently sever ties,” said Hurley, who co-drafted the letter with Welch and Jonathan Weissman, a CRISPR pioneer at UC San Francisco. “We don’t see the editors of these journals as villains, they are part of our scientific communities. I see Elsevier corporate as the villain, and we are hoping this will give some ammunition to our friends at these journals, to tell them this is important, and that the corporate side is going to have to bend.”

Randy Schekman, a UC Berkeley professor of molecular and cell biology and co-recipient of the 2013 Nobel Prize in Physiology or Medicine, agrees with MacKie-Mason. “If Elsevier starts losing people at that level, and more importantly, if people stop sending papers in and stop reviewing for them,” he said, “maybe they will get the message.”

Schekman, who once was on the editorial board of Cell, has long advocated for open access to research publications, both as an editor of the Proceedings of the National Academy of Sciences, which is published by an academic society and makes its articles free after six months, and as founding editor of the open access journal eLife. He refers to Elsevier as a “pirate” that reaps enormous profits: The company’s publishing arm has a 40-percent profit margin, among the largest in the world for a publicly traded company.

In a June 20 opinion piece in Scientific American, Schekman calculated that the cost of UC’s subscription to PNAS was about 4 cents per paper download, while UC’s Elsevier subscription works out to about $1.06 per download.

“Elsevier recognizes that this (the open access movement) is an existential threat to their profit margin,” he said. But conversations with heads of universities around the country — in particular, public universities — give him hope that Elsevier will have to compromise.

“I can’t believe that this isn’t going to snowball,” he said. “Are they going to be willing to walk away from the United States? I find it hard to understand why they haven’t gotten the message now, as if they can afford to alienate the entire UC system. But then, they’ve done that with the entire countries of Germany and Sweden.”

When UC and Elsevier walked away from the table in February, UC retained access to most, but not all, articles published before Jan. 1, 2019 — it had already paid for perpetual access — but lost access to everything published thereafter. Before Elsevier pulled the plug on July 10, UC informed researchers that its libraries had instituted other means of obtaining journal articles, which are crucial for researchers at the cutting edge of their fields who need to follow the latest developments and publish their own new findings.

MacKie-Mason, a professor of information and of economics, said that legal alternative means of accessing Elsevier journals — scrounging the internet for free copies in other databases, contacting the authors directly and asking for a copy or, as a last resort, paying Elsevier for access to individual articles — are working so far, with fewer than a handful of complaints. Most requests are handled by Berkeley librarians within 24 hours, he said, and many within four hours.

Nevertheless, Welch and Hurley said that these stop-gap measures are cumbersome and onerous, when the norm before was instant access through the internet.

“It is unclear to what extent that will always work,” Welch said.

Hence, the desire by Welch and his colleagues to let Elsevier know there will be consequences.

When publishing contracts came up for renewal in the past — for Elsevier and for Springer Nature, for example — and the university was at loggerheads with the publishers, faculty initiated grassroots efforts to refuse to review papers — to conduct what is known as peer review — for the publishers’ journals. In each case, the publisher eventually reached an agreement with UC. This time, both sides are playing hardball.

MacKie-Mason said that the negative publicity worldwide about Elsevier’s contracts seems to be having an impact on the Amsterdam-based company. Elsevier’s CEO stepped down in January, and the new CEO has agreed to “publish-and-read” contracts with Norway and Hungary, which had earlier refused to sign contracts with Elsevier. Under such contracts, most or all of the payments are tied to how much researchers publish; and having paid to publish, all members of the institution are then allowed to read everything in the journals.

The company is now negotiating with Sweden. A 3 percent drop in Elsevier’s stock price following second-quarter earnings reports may have had some effect.

“Lo and behold, they have signed their first two publish-and-read agreements in the world — the type of agreement we have been seeking — since we ended negotiations with them,” he said of Elsevier. “We have seen signs that there is change afoot in Elsevier since the beginning of the year.”

But until Elsevier reaches out and agrees to meet UC criteria, access to new journal articles — “the copies of record” — will require more effort. The signers just want to jump-start negotiations.

“I don’t think we imagine this will have an immediate impact on Elsevier but, hopefully, it will bring some attention to the issue,” Welch said. “We provide a service to the journals, as far as serving on their editorial boards. This is a way to register our protest a little more significantly than if we just decided we wouldn’t review papers for them.